Here's the current state of things: 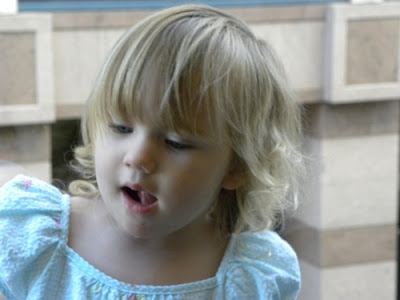 I have been trying to grow her bangs out since the day she was born. But growing out bangs usually involves a clip, head band or hair tie of some sort and Sadie just isn't having it. She barely tolerates having her hair brushed each morning (don't get me started on how hard it is to wash her hair) and the suggestion of a hair tie can bring on a full blown tantrum... and if I do sneak a bow into her hair it will be promptly ripped from her head and thrown onto the ground with a scream.
On the other hand, trimming Sadie's bangs, while a once a month event, isn't much more fun and usually involves someone coming up to me at the next Mass and asking if my two-year old got a hold of scissors (it's hard to clip a straight line on a struggling target).
So do I let her run around with her hair in her eyes until it's long enough to brush back behind her ear? Or do I sneak upstairs during nap time, attempt to roll her over (since she sleeps on her stomach) and clip the too long strands? Maybe I'll be posting a crooked bangs picture under "daily dose of cuteness" before too long... And I'll resist the urge to answer the question about Sadie and the Scissors next time by saying, "yes, I always let my two year old run around with scissors," the next time it's asked...
Posted by Cammie Diane at 7:05 PM