Visiting the Cathedral and a Question about the Creed 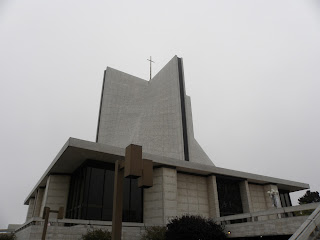 When we were in San Francisco last weekend I was a little bit torn about where to attend Mass on Sunday morning before we hurried to begin the long drive home. With quite a few beautiful churches to decide between I was tempted to skip attending Mass at the cathedral and take Sadie and Maggie to one of the lovely old churches. I know that it wouldn't really matter where we went, because the Mass is what's important, but since trips to the city are few and far between (it was a year since the last time I'd been down to visit for my five year college reunion) I wanted to take them somewhere special. We've been to the cathedral in San Jose, and we finally decided to go to Saint Mary's of the Assumption, the cathedral in San Francisco.
After viewing the cathedral from the outside it's really hard for me to imagine anyone describing it as "aesthetically pleasing" much less beautiful. Paul has explained that it's supposed to look like a cross from the air, but that he's heard people say that it looks more like the inside of a washing machine from higher elevations. I was pleasantly surprised by the inside (when compared with the outside). It isn't something I would have ever dreamt up, but it wasn't the horrible cement blob that I imagined having seen the outside. And Sadie was, thankfully, impressed into silence. She sat looking at the stained glass that runs up to form a brightly lit cross on the ceiling.
There was one tantrum outside because she wanted to stand at the edge of the railing (and didn't want to hold my hand) and the railing was not designed by someone who had children in mind (when Paul saw it he said something along the lines of "they must not have many kids here..." It's a drop that's a minimum of one story with a huge gap between the ground and the start of the railing.). Other than that though, things went really well. 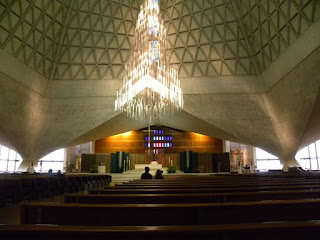 The Mass itself was beautiful. There weren't many people there (maybe other Catholics who attend Mass on Sunday mornings prefer the more traditional looking churches too?), which was a bit surprising, but lots of tour groups walked by and peered in.
Yet one part of the Mass left me with a question and I thought I'd ask it here. When it was time for the Profession of Faith we started to recite the Creed. At least Paul and I did. The rest of the Church, with the exception of the priest and maybe a small handful of the people who were there, were silent. I had a moment where I glanced up from making sure Maggie and Sadie were happy and quiet to make sure that we were supposed to be reciting it. I think there might have been two other people in the area surrounding us that's mouths were moving. Everyone else just stood there silently... So, here's the question: At your parish do most people say the Creed out loud?
To answer my own question for our own parish: in our little church (which has numbers many Sundays similar to the number at the nine o'clock mass we attended at the cathedral... which struck me as kind of sad since our town only has a few thousand people...) pretty much everyone does. People who don't know the words look in their missiles. The entire church fills with voices professing their faith. It just struck me as odd that it was so silent at that point during Mass at the cathedral...
Posted by Cammie Diane at 5:49 PM