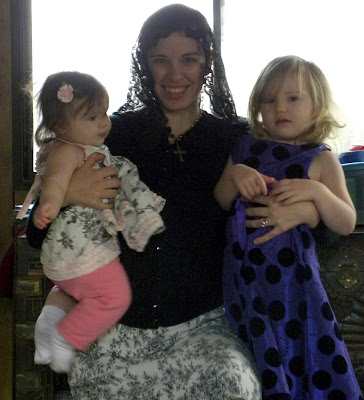 I haven't written about headcovering in a while. The reason, when I think about it, is that I don't worry about it nearly as much as I did when I first began covering. It's simply become a part of life. The stress of "what will people think" that was a worry when I first began covering doesn't come to mind these days (maybe I'm too busy fending off Maggie's grabby little hands, which seem to be in love with lace!).
I feel called to cover my head during Mass and so I do. It's as simple as that.
And yet, once in a while, I read something that reminds me that the act of sliding a comb into my hair with a piece of lace attached is, apparently, seen as controversial to some.
The conversation takes place on this post. The blogger says that she's been veiling for two years and that she feels like it's an excellent reminder to pray without ceasing. And then the responses start. You wouldn't think that a woman saying that she chooses to cover (without making any sort of comment about what anyone else should do) would cause such outrage. And yet it does. Here's one of the comments:

"You’d fit in well in Saudi Arabia.
Covering women is a manifestation of gender politics. Women are covered to symbolize concealment of shame. This makes men feel better about themselves, because a quick glance at a covered woman lets him think “harlot!” and feel off the hook for abusing her in other situations.
Honestly, that’s rediculous. Why do you want to wear symbols of shame before your God? Don’t you consider his creation to be good?"

Sigh. Where to begin?
The first thing that comes to mind is that it's rather sad that there are people who've actually bought into this way of thinking.
And while people may think many things when they see a woman wearing a chapel veil, I would truly be shocked if "harlot" was even in the top hundred on the list of thoughts that come to mind.
Veil are not "symbols of shame."
Alice Von Hildrebrand gives the best response I've heard to the fictional claim that the Catholic Church oppresses women (because that claim usually goes along with this particular view of veils) in the Privilege of Being a Woman. Here she dispels the myth:

"In order to understand the greatness of a woman's mission, we must open our minds and hearts to the message of the supernatural. It is the key that will reveal to us the greatness of femininity. It is one thing to read a text; it is another to interpret it correctly. All the arguments which seem to favor the thesis that the Bible has been discriminating against women from the very beginning can easily be reversed by interpreting the sacred text with the eyes of faith.

That men and women are perfectly equal in dignity- both being made to God's image and likeness- cannot be contested. But to be created last does not indicate inferiority. As a matter of fact, it could be argued that there is an ascending line in creation: from inanimate matter, to plants, lower animals, mammals, man, and finally, woman. Obviously we are not inferring that woman, being created last, is superior to man. We only wish to show that the argument used to prove her "inferiority" is not valid and can be turned on its head.

The fact that Eve's body was fashioned from Adam's rib can also easily be interpreted as a sign of special dignity and preciousness: for to be made from the body of a human person (made in God's image and likeness) is definitely nobler than being fashioned from the dust of the earth.

Indeed the punishment meted out to Eve, as de Beauvoir points out, was particularly severe. As mentioned above, when referring to excruciating pains, the Old Testament mentions the pangs of childbirth. But, in light of redemption (which has given a sublime meaning to suffering), to suffer agony to bring another human being into the world is a premonition of the sufferings of Christ whose blood has redeemed us. It imitates that if Eve carries a heavy responsibility for the tragedy of original sin, the new Eve will play a cardinal role in the work of redemption. Saint Andrew of Crete writes: "The women applaud, for if at another time it was a woman who was the imprudent occasion of sin, now too it is a woman who brings in the first fruits of salvation." Kierkegaard writes: "it is my conviction that if it was a woman that ruined man, it was a woman also that has fairly and honestly made reparation and still does so..." More will be said about this later.

If we are to speak of Church practices, it is not by accident that seven of the fifteen decades of the rosary are dedicated to Mary, once again putting the limelight on her unique role in the economy of redemption. Moreover, the Stations of the Cross honor women.

As soon as we abandon a secularistic interpretation of the Bible, we can perceive that, from a supernatural point of view, women are actually granted a privileged position in the economy of redemption. Those who persist in wearing secularistic lenses have eyes and do not see, have ears and do not hear. For the Bible cannot be understood except in an attitude of humble receptivity, that is, "on one's knees," (as Kierkegaard puts it). So called "biblical" scholars may know Aramaic and Greek, but nevertheless radically misunderstand the divine message, because their "scholarship" has warped their faith. A tacit refusal to receive God's message-- because of intellectual pride-- is punished by blindness. "

And for a good explanation of headcovering I suggest this post from the Catholic Knight.
Posted by Cammie Diane at 11:54 PM

Email ThisBlogThis!Share to TwitterShare to FacebookShare to Pinterest
Labels: headcovering