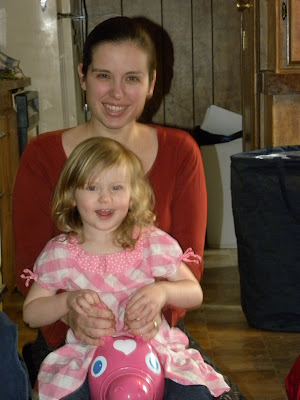 I read an interesting article the other day about how to answer the question “What do you do?” It got me thinking a bit. I don’t hear that question very often these days. Actually, to be completely honest, I don’t hear that question at all. Before Maggie was born people would ask me when I was going to go back to work, but since we added the little cubby bear to the family no one has said a thing. Which is a good thing. Because the question/statement combination; “So when are you going to go to back to work… I mean, you didn’t go to college to be a mom!” causes a fake, plastic smile to freeze on my face and I’m just about as good at faking smiles as I am at faking hugs (which is to say, not at all).

Now-a-days the words I hear most frequently, from people I know and from random strangers passing me on the street is the phrase: “You’ve got your hands full, don’t you?” It could possibly be because Sadie perpetually has a look that lets everyone know she may be plotting an escape. And she is.

I saw a picture of a quiet looking Hollywood starlet’s child the other day. The actress was lying on the beach as the child played nearby. It caught my eye because I remember that particular actress being pregnant at the same time I was, but as I studied the picture one thought stood out… I can’t imagine lying down with Sadie playing at the beach. She’d charge straight in the water (it happened. It was right around 50 degrees outside and the water was freezing, as it tends to be on the Oregon border in October, and she went straight in.). Or she would head out to explore! She definitely wouldn’t play quietly next to me while I relaxed! In my most wonderful dreams Sadie stays quietly near me at all times when we’re out. The reality is something else entirely.

Back to the original question (and the original point of this post! I’m so easily distracted!). Before I found out I was expecting Sadie I hated hearing the words “What do you do?” They made me wince slightly.

You see life had just changed drastically for me. I had gone from working as at a rock climbing gym in the city and having been hired to work for the clandestine services of the CIA (after 13 months of the hiring process) to being a housewife in a town of 164 with a tiny trailer and an inflatable mattress. I was writing a novel and working as a sports reporter for the local newspaper, but I didn’t really like talking about the novel (it’s done by the way, and it’s hiding now, all 90-something-thousand words of it, along with another one I finished after I finished it, on a high shelf in a closet at my parent’s house) and I didn’t really feel like my ten hours a week sports writing gig answered the question.

I experimented with answers. If I said “homemaker” people looked at me like I was insane, as if they wanted to say “don’t you know that’s not a job” (I wanted to reply to their look, “it most certainly is a job! And a full time one at that!” but that’s the problem with responding to looks, you have to be much bolder than I am). If I said writer, they wanted to know about what I was writing (which I was even less enthusiastic about talking about). Maybe I should have said “farmer.” I did have 90 tomato plants at that point (a seed planting mistake that flourished and supplied half the town with tomatoes all summer and fall long), along with eggplants, peppers, carrots, radishes, lettuce and grapes.

The author of the blog I was reading had struggled with the answer to the question as well (and she has come up with a strategy for answering that’s less strained than anything I came up with).

Not having to answer the question these days is something of a relief. For now. And I have two or three more years before the next round of questions start… “Why aren’t you’re kids in school right now?”… And then I can hear all the different opinions about homeschooling. I bet they’re just as much fun as the opinions I’ve heard about “wasting” my education or being a homemaker! Maybe I will have perfected my "listening to something ridiculous" smile by then!
Posted by Cammie Diane at 11:11 AM