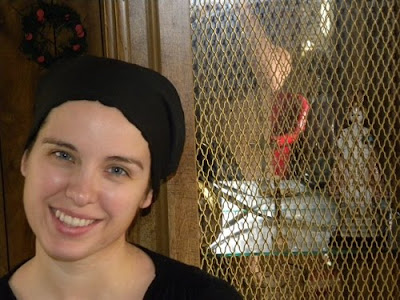 You might not be able to tell from my blog, but I’m really very introverted.

Years ago I used to make an effort to be outgoing, but as the years have gone by I’ve come to the conclusion that the exhausting effort to act like I’m an extrovert, just isn’t worth it. However, the other day when I saw this article on Father Z’s blog, I thought that I might be making little teeny baby steps of progress. Had I really made peace with the often stressful Sign of Peace?

The question, which I first saw in poll form, asked readers what they thought of the Sign of Peace during the NO Mass.

I’ll admit that my first reaction, and the answer that I quickly clicked, was #4 (which ended up coming in second behind “I tolerate it”). Then I thought about it a little bit more and realized that I don’t dread it nearly as much as I used to.

See, I’ve never been a big “hugger” with people that I don’t know extremely well. In high school I’d get comments about my “fake hugs” which was a weak, one armed pat on the back when someone I wasn’t exceptionally close to tried to hug me.

One of the great things about our parish is that it’s very warm and welcoming. But that also means, for introverts, a little more hugging that we’d probably chose for ourselves. Or wish upon anyone who’s hugging impaired. Anyways, I digress. Back to the Sign of Peace…

Could it really be that the Sign of Peace no longer bothered me? Had I actually gotten used to it?

I tried to think back. I’d dreaded it and desperately thought of ways to avoid it for the first year or so after my conversion. After Sadie was born, however, my tactics changed. Paul and I both began to compete to see who would be holding the baby when it came time for the Sign of Peace.

It was kind of funny when I think about it. My arms would be exhausted, straining after holding a twenty pound baby for more than half an hour and suddenly it would almost be time for the Our Father and Paul would look over, quite concerned, and offer to take the baby (I’m not sure how he feels about the Sign of Peace, but I know how he feels about holding hands during the Our Father!). At that point, however, I wasn’t about to give her up. I’d held her until my arms were about to fall off. And no one could hug me when my arms were full of 20-lbs of baby!

That hasn’t happened for a while now, and I’ve finally realized why I moved from the “dread” to the “tolerate” category: two babies. With Maggie and Sadie there’s no jockeying to hold a baby. We both have one and that means 1) no hand holding during the Our Father and 2) no hugging during the Sign of Peace.

So I have to come to the conclusion that I really haven’t “gotten used to it.” I just have a better excuse these days for my non-huggable status. I have a feeling that when our little ones are old enough to sit on their own and not be held I’ll be back to “dreading” the Sign of Peace.
Posted by Cammie Diane at 1:50 PM