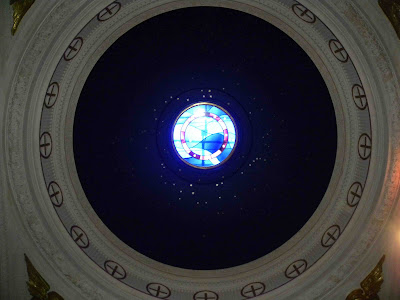 Does anyone else feel as if this whole Father Corapi debacle just can't get any uglier... until they wake up each morning and read the latest update and then the update response and then the response to the response and realize that that their earlier conclusion (about things not being able to get any uglier than they already were) was horribly wrong? And then you wonder if it can get any worse and you wince a little because it can and, since the whole thing seems to be steaming along at a nice little pace in a downhill direction, it seems that it's likely to.
First there was this from SOLT (Society of Our Lady of the Most Holy Trinity). There was also this from the National Catholic Register, confirming that that earlier link was in fact a genuine SOLT statement (wouldn't it have been lovely if it wasn't?).
We all probably could have guessed what would happen then. A portion of the Catholic blogosphere would not be able to refrain from pointing out how they knew he was guilty, how his stupid cult followers were just going to fall apart now, and how anyone with a bit of sense could have seen this coming from a mile away. A reader might be left wondering when perusing these posts, exactly what happened to love and charity and sorrow when confronted with grave evil (because if this is true it's pretty serious). Instead we find a lot of "I told you so's" and comparisons with a certain president who had a strained relationship with the truth. 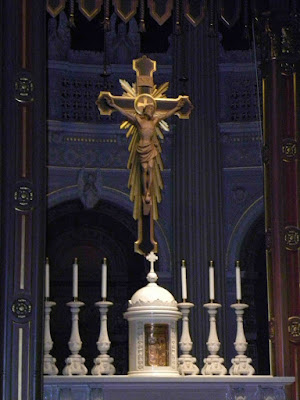 I'd waited for Father Corapi's response with a sinking heart. You see, I knew after the latest round of bashing, that the truth was buried so far beneath the lies, that we could never really know if he did or didn't do whatever the letter to the Bishops said, unless he came forward and confessed and everyone's stories suddenly fell into line (which seems unlikely). The response came today.
The entire situation is sorrowful and has the fingerprints of Satan all over it. Someone (or multiple people) is lying. Someone (again... or multiple people) is telling the truth (or a closer version of it). And, as we tear each other apart in the comments sections of various blogs and news outlets, and in actual blogs as well, I'm pretty sure Satan is laughing at the discord that has been sown.
We should pray for Father Corapi and the priests of the Society of Our Lady of the Most Holy Trinity. We should pray for the Bishops. And we should pray that we, as Catholics can come together rather than being torn apart by this whole horrible situation.
Maybe we also should realize that we don't need to know everything, a hard realization to come to in an age of instant online news, where everyone promises to keep us updated on everything we could possibly want to know.
God will judge those who have caused this scandal (and I really wouldn't want to be trying to explain that at judgement if I hadn't made a really, really good confession...) just as He will judge all of us.
Most of all I hope that the scandal caused by these lies (because, one way or another, someone is lying) doesn't cause any of the faithful to lose faith in the Church that was established by Christ to guide us.
I'll end with a few Saint Quotes. Because... we all could use a little saintly wisdom at the moment...
"Not the goods of the world, but God. Not riches, but God. Not honors, but God. Not distinction, but God. Not dignities, but God. Not advancement, but God. God always and in everything."
-- St. Vincent Pallotti
"Who except God can give you peace? Has the world ever been able to satisfy the heart?"
-- St. Gerard Majella
"Charity unites us to God... There is nothing mean in charity, nothing arrogant. Charity knows no schism, does not rebel, does all things in concord. In charity all the elect of God have been made perfect."
-- Pope St. Clement I
"Those who commit these types of scandals are guility of the spiritual equivalent of murder, but I', here among you to prevent something far worst for you. While those who give scandal are guilty of the spiritual equivalent of murder, those who take scandal- who allow scandals to destroy faith- are guilty of spiritual suicide."
-- St. Francis de Sales