Homeschooling and One Priest's Confusion 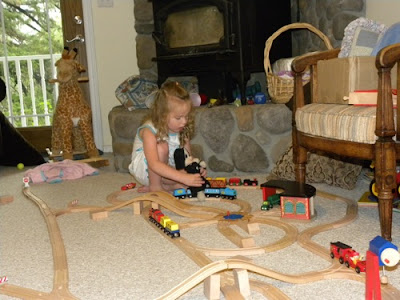 I love reading pretty much anything I can get my hands on about homeschooling. After spending one year as the cheerleading advisor at our local high school I was completely convinced that the threat of jail would never compel me to put my children in a situation like that (oh my goodness! I went to public school! But how things had changed, at least in my area, in the past ten years!!!).
I'm sure there are schools out there that are great. I went to one. Academically I think the one in our current area is very good. Lots of great teachers. A wonderful assortment of AP and Honors classes. Great coaches. However, as I heard the stories my sixteen girls told in practice about their... exploits (that made me want to scream: "You're fifteen! What the heck is going on here?!?!?!") I became more and more convinced that homeschooling would be the right path for me family. Paul, who remembers a particular primary school teacher coming to school obviously drunk, and dancing around in front of the class of kids, who were something like eight years old, quickly agreed. And the bullying stories I've heard in the past years... are enough to make my hair turn grey!
So, as I mentioned above, I pretty much devour anything I can find on homeschooling. I loved reading Melody's post yesterday on the approach of the school year (and the picture of her family the year that they had matching sweaters is pretty adorable!). Then I followed the link in that story back to this story and then to this story and my jaw dropped.
Have you heard about this? The priest that insists homeschooling is tantamount to disobeying the Church?
I know I'm a little late on addressing this, but I was pretty shocked when I began to read through all the material I could find yesterday:

"...There are several reasons to prefer Catholic schools, Father Stravinskas told Our Sunday Visitor, including that the Church Fathers made clear that catechesis is the job of the whole Church, with the main responsibility resting on the shoulders of the pastor, not the parents.

And Catholic parents who choose to home-school when there is a Catholic school available at least implicitly send the message that they do not trust the Church to educate their children properly, and the children get that message.

“On the same property where they go to church on Sunday is a school where the parents don’t wish to send them,” he said..."
Read the whole thing here...

Fr. S goes on to say that he thinks it's unhealthy for children and mothers to spend so much time together. However after discovering a bit more of his work... I find it hard to take anything he says very seriously. If this interview is really a response by Father Stravinskas, which it appears to be, then he's indicated that he thinks using NFP is a sign that families think they're better than everyone else, and that receiving the Eucharist frequently is a very bad thing... and that it "breeds contempt..." Which too me, sounds a bit backwards and crazy. But what do I know? According to Fr. S I'm not responsible for the children entrusted to me.
I'll admit, my first thought, when I read the OSV article was: "I know kids that went to Catholic schools... I went to college with them... and most of them are atheists now." More than that, most of them seem to have been raised with an unhealthy contempt for the Church and all of her teachings. Again, I'm sure there's wonderful public and Catholic schools out there... but for those of us who are a bit gun shy because of the formation we've seen take place... I'd say seeking out other options is a valid response.
Father Stravinskas couldn't be more wrong... and his understanding of the domestic Church, which is very much a part of the Church, is sadly misinformed. He says, that homeschoolers try to set up a "church within the church." But the family is a church within the Church. Look at what Pope John Paul II said:
"Marriage is an act of will that signifies and involves a mutual gift, which unites the spouses and binds them to their eventual souls, with whom they make up a sole family - a domestic church."
-Pope John Paul II
"As the family goes, so goes the nation and so goes the whole world in which we live."
-Pope John Paul II
So I don't think I'll be abdicating my responsibility for my children's formation any time soon... I think the past century has taught us that that is a very, very bad idea.
Posted by Cammie Diane at 10:38 AM