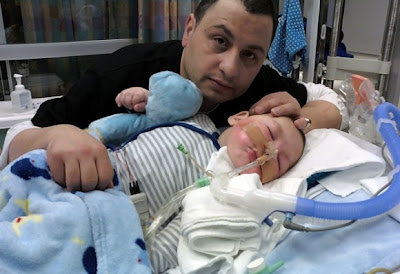 This story is heartbreaking. When I saw the link posted on a friend's facebook page I hoped I'd somehow misunderstood the title. Unfortunately 'Death Panels:' Canadian Court Rules Baby's Life Support Removed Against Parents Wishes doesn't leave much room for doubt about the direction the story, and the Canadian government, are choosing

“...Monday at 10 am they will kill my baby,” Moe Maraachli, Joseph’s father, told LifeSiteNews shortly after the ruling. “There’s no more humanity. There’s no more chance. I’ve tried everything for him. No more appeals, nothing.”

“I asked them: why not send him to Windsor and let him die at home?” he continued. “They said they will give him injection, but I don’t want to...”

“...Is it that they want to simply say, we have control?” he asked. “If it’s about their control, then we’re in serious trouble. They now control when someone lives and when someone dies, and who makes those decisions, and how those decisions are made.”

Schadenberg said the court appears to be saying that hospitals and doctors can make decisions for patients whether they like it or not. “It’s worse than the death panel concept that’s being debated in the US. It really is, it’s much worse,” he said. “They’re saying ‘we will decide’, they’re not even going to converse with you. ‘We have the weight of the Court, we have the financial bearing of a massive government institution to be able to force this on you.’”

“That has serious repercussions, because you simply cannot trust the moral authority of the health care institution or the doctors,” he added...

Paul's been planning on applying to a canon law program in Ontario in addition to the other schools he's already applied to... and this makes me not want to even consider moving there while he studies... This is such an appalling decision. And as a parent it's frightening.
Sadly, this shows the next step a government may take when it fails to see the value of human life...
Photo from LifeSiteNews.com.
Posted by Cammie Diane at 11:23 AM