What I Didn't Learn in RCIA... 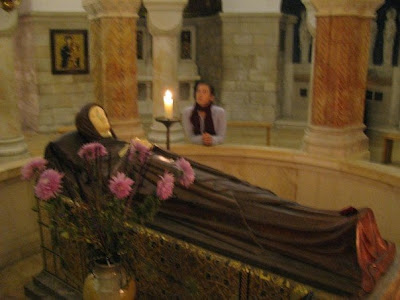 A thought occurred to me a couple of months ago and after it popped into my head I was rather surprised that it hadn’t occurred to me sooner. Here is the thought, roughly, as it was when it first fluttered through my brain:

I made it through our “Engaged Encounter” and RCIA without hearing a single word spoken about the Church’s teachings on contraception.

That is to say, I went to confession, had first communion and was confirmed without anyone ever telling me that contraception is forbidden by the Catholic Church.

Does anyone else find this deeply disturbing?

I stumbled upon the subject in a relatively old book that Paul had picked up at a Catholic books store. I was stunned when I came upon a list of sins that were considered mortal and found that contraception was a mortal sin. We were sitting in the car (if I remember correctly we were waiting to go to confession) and I glanced over at Paul and asked if this was “one of those things that changed after Vatican II” (oh I still had [and continue to have] so very much to learn!).

When I found out that it wasn’t I burst into tears.

You see, I understood by then that I would have to embrace this teaching (and let me say quickly that the teachings that were difficult to accept in the beginning were the ones that, after much prayer and reflection, have often proved to have the greatest positive impact after I came to terms with them). I had accepted apostolic succession (more on that later) and that the Gates of Hell would not prevail against the Church that Christ founded on Peter (Matthew Chapter 16) so being a “cafeteria” Catholic wasn’t an option. It was all or nothing and I had already made the decision that the choice was gong to be “all” even though I didn’t know exactly what “all” entailed.

After growing up in a culture where life isn’t recognized as the gift that it truly is, I was frightened by the implications that this particular teaching would have on my life and my future. Sure I wanted kids, in some vague time, some distance in the future.

Thankfully God’s plans for us, while seldom in line with our plans for ourselves, can lead us more fully towards realizing our potential if we have the courage to say “yes.”

And this particular “yes,” while difficult at the time, was another step down the road I was supposed to be heading down.
Posted by Cammie Diane at 1:07 AM