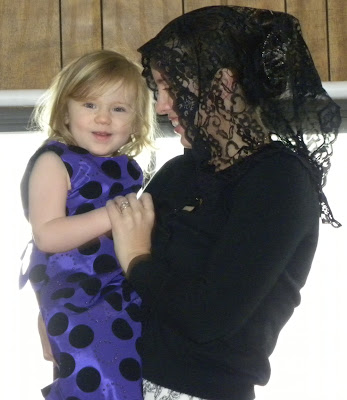 I first saw this over on Fr. Z's blog and then headed over to NCR to read the entire thing (it's written by one of my favorite NCR bloggers, Patrick Archbold). And I just had to post it hear because... well I guess lately I've been feeling a little Mrs. McGillicuddy-ish:

As general rule, vigilantes are not born, they are made. Their steely resolve to right the wrong, forged in the fires of un-rectified lawlessness, transforms them into self appointed guardians of the good. They become—watchmen.

The Mrs. McGillicuddys of the world have had much to endure these last forty years. They sit in their pews and watch as liturgical experimentation and improvisation transform the holy mass into a vehicle of self expression for those who do not understand what it truly expresses. They sit and wonder, when will somebody do something about this? When? When they finally reach the reluctant conclusion of never, what follows results in either resignation or transformation.

Now a confession, I’m a Mrs. McGillicuddy. But I don’t want to be...

I resolved to call the diocese. I got the Director of Worship on the phone. I said, “I want to report some liturgical abuse.” I never knew this before, but you can actually hear eye-rolling over the phone. I am sometimes surprised that an epidemic of blindness does not plague diocesan liturgical directors, for all the eye-rolling they must do...."

As many of you know I've been struggling with this a lot lately... It's been a mixed experience. I've given a lot more thought to the Mass and why these abuses bother me so much, which in a way has made me appreciate the beauty of the Mass even more (if that's possible!). On the other hand it being mentioned was followed by a homily on "nitpicking" and there still has been no change. I'm a little depressed about it. Two weeks ago we made the two hour round trip drive. I think we probably will this week as well...
I have an image of my head of a college with a EF Mass close by... That would actually influence my vote in the poll at the right side of the page...
Posted by Cammie Diane at 11:22 AM