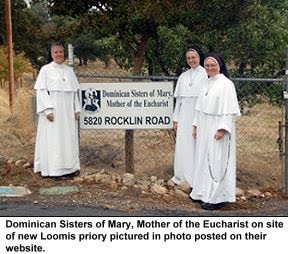 It's always wonderful to hear about increasing vocations! And it's especially thrilling to hear that there are so many vocations that a group has to build more priories!
You may be thinking, what could be better, so I will add the unsurprising fact that they do in fact wear habits (I think that's true of every growing group I read about!).

"...With the extraordinary rate of vocations coming to the Dominican Sisters of Mary, the building of a new priory is a timely response and a tremendous opportunity to expand the teaching apostolate of the community,” says a statement on ‘Our California Expansion’ on the order’s website..."

"...The Motherhouse of the order in Ann Arbor, Michigan, “is now filled to capacity,” says the order’s website. “In order to provide housing and adequate formation to the young women seeking to give their lives to Christ, the Sisters hope to establish priories in California and Texas, as well as a House of Studies.”

The order was established on February 9, 1997, “when John Cardinal O’Connor of New York canonically established the Dominican Sisters of Mary, Mother of the Eucharist as a community of religious women,” says the order’s homepage. Since then, the order has grown from four sisters to more than 100. The average age of a Dominican Sister of Mary, Mother of the Eucharist is 28, and the average age of women entering the order is 21, according to the website.

“In a world permeated by the culture of death, the Dominican Sisters of Mary seek to restore the dignity of the human person and work to build up a culture of life through how we live, what we teach, in participating in the annual March for Life in Washington D.C., the Walk for Life in San Francisco and pro-life events in other parts of the country, supporting and encouraging families and most especially through our daily fidelity to the consecrated life and our prayers,” says one entry on the order’s homepage..."

In related vocations news while there was a decrease in the "relative superabundance" of priests in North America and Europe (the article compares the percentage of Catholics that were in these areas in the past when compared with the percentage of Catholics in the world) and in priests who are members of religious orders, there has been an overall increase of 5,600 priests between 1999 and 2009! More wonderful news!
Posted by Cammie Diane at 11:21 AM