The day for the Holy Baby 3rd Birthday Party had finally arrived. Nani picked up the birthday cake on the way to the park and told us that the cake-maker had told her that now that her kids are older she just didn't realize that this was what little kids are into now-a-days. Nani replied that Sadie may actually be the only one.
When Sadie saw the cake she was shocked. She'd been asking and asking and asking for a "Holy Baby" birthday cake, but it was pretty clear she didn't actually expect us to get her one. 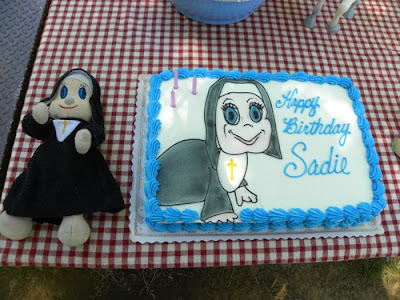 Here's one of the very cute little saint dolls I got from Erin at Saintly Silver on Etsy. I love them. The girls love them. Sadie remembered instantly which doll was hers and which was Mae's and kept bringing Mae her doll and then would continue to glance over to make sure Mae still had her doll (even when Mae was asleep...). 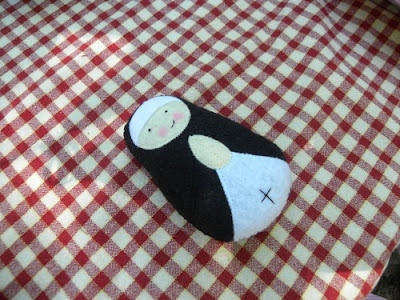 Sadie had been pretty patient, waiting all morning to open her presents at the park with everyone there (she had opened one present when she'd woken up... Maximus, the horse that Holy Baby had been riding around the living room in today's first post). But there came a point when she just couldn't hold out another moment. Waiting four hours is a very long time when you're three... 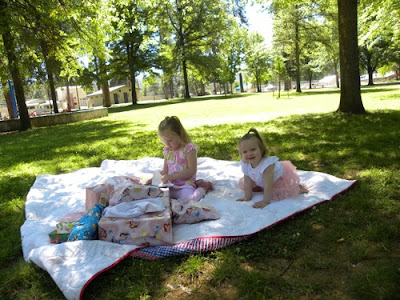 Then came the moment of truth. She opened the dress. She looked at it. She frowned. And then she said, in a voice that said a tantrum could be coming very soon: "Want put on now!" So I helped her pull it over her dress, despite the fact that it was already nearing 90 degrees outside and it was 11:30am... she wore it until Nani convinced her that it was going to be too hot to play with it on the playground... she must have been very warm to agree to take it off! 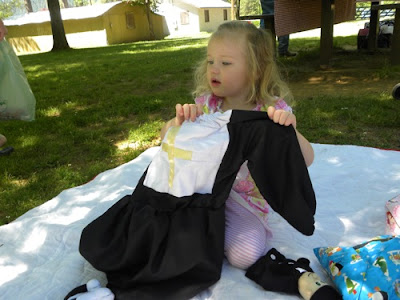 With the dress safely on, and the near catastrophe averted, the present opening continued... 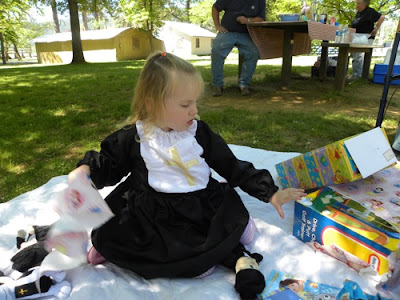 Mae has an ear infection now, and so last night I didn't get to finish the habit I was sewing to go along with the dress. I did manage to finish the snood that was going to be under the habit, however (in the car on the way to the party!) and Sadie was pretty thrilled when she saw it. She's been asking me lately to wear a "hat" (that's what she calls the snoods) and was excited to have one of her own. It's white linen, just like the bib part of her dress.
In the picture below Sadie is demonstrating how she prays. 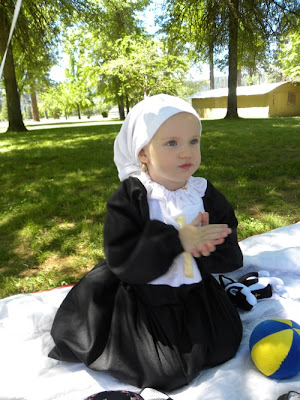 Sadie was pretty excited to be walking around as "Holy Baby." She may have been a bit annoyed that the "pappa"razzi was following her around snapping picture after picture though.

When it came time to light the candles a breeze came up. After three tries they finally stayed lit through the happy birthday song. 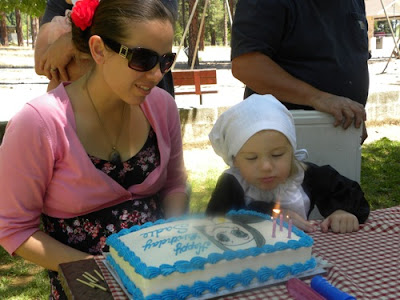 Sadie woke up this morning and told me that "Dee bit Mae Bae." After a few seconds of elaboration on that point she announced that she would be going on the big slide because she was going to be three, but that Mae wouldn't be because "Mae Bae is just a little baby." So here she is on one of the "big slides." 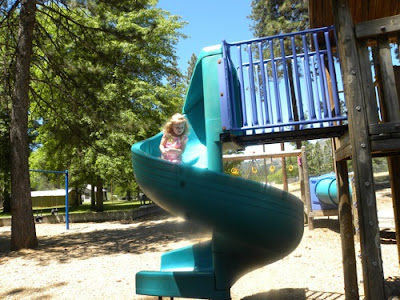 And here she is on the second "big slide." 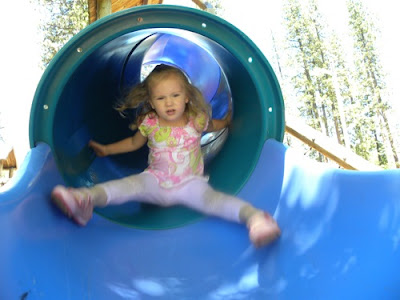 Mae Bae, the "little" baby (she weighed in at 25 lbs yesterday at her doctor's appointment and won't be 1 for another two weeks, putting her in the 95th percentile for her age) passed out on the picnic blanket while her sister continued to play on the playground. She didn't seem to think she was missing out by not going down the "big slides."
She did have time to cuddle with her two new dolls. Mae now has her very own "Holy Baby" and will no longer have to swipe her sister's doll. 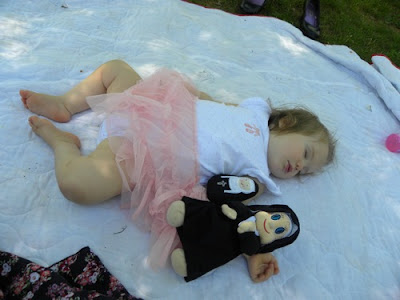 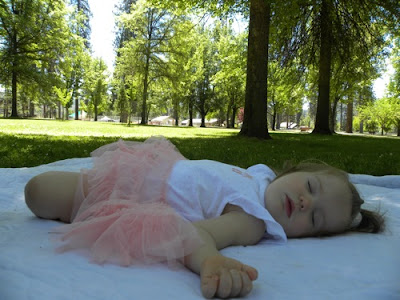 While Mae Bae napped, Sadie and I read Dora stories (once she'd had her fill of the "big slide")... 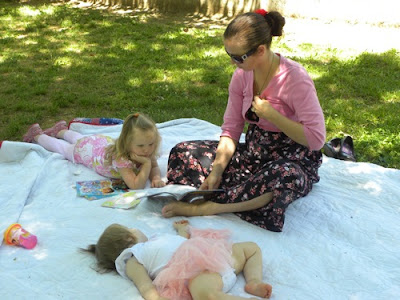 Sadie was very focused on the Dora stories and didn't have much energy to put into her stated goal which was: "I want to wake Mae Bae up!" 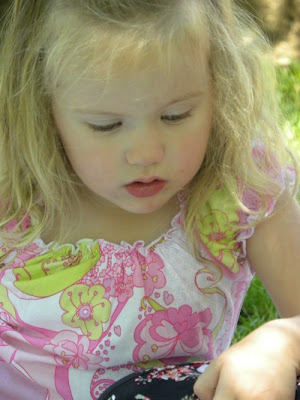 After the pool we drove to Nani's house and Sadie saw the present that Nani and Grumpa had given her. It had been too big to take to the park. She named him Maximus. 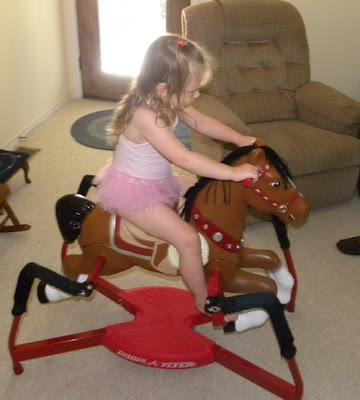 After riding for quite a while she lined up every other horse she could find in the house to make a "fort" and pretend to nap. The horse she's laying against was mine when I was her age. His name is "Fellar" after my first horse (who sniffed my diaper when we met when I was three days old!). 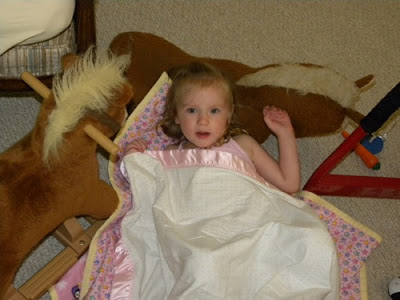 We ended the day with Sadie's requested dinner of hot dogs, watermelon and potato salad. It was followed by left over birthday cake. Sadie was pretty excited about her wonderful day! She even wore one of Maria's beautiful aprons (she asked Nani to put it on before dinner!). Speaking of which, I have a review that will be up very soon about these very aprons (which I'm practically addicted to! If I had an unlimited income I would want one in every color to match every outfit I own!).
But first I'm actually going to go to bed before 10pm tonight and get a little extra (I hope!) sleep (as long as Mae sleeps tonight too!). 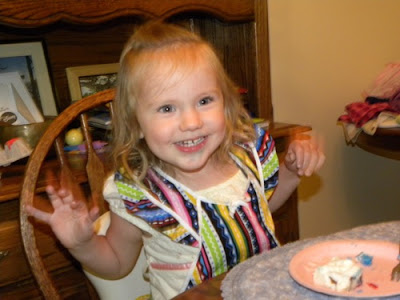