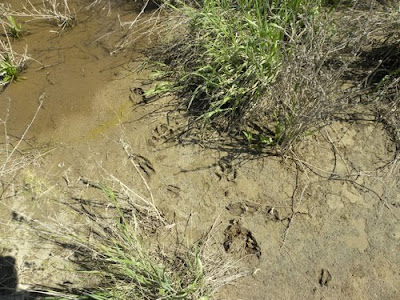 Today is a better day. I feel like the flu is almost gone and Sadie bounced out of bed a bundle of energy and has yet to break down into hysterics, so I think she’s feeling better too. Mae is munching on crackers at the moment, thrilled to be eating “non-baby food” (she scoffs at any offer of baby food these days or anything that looks vaguely mushy, like it’s an insult).

We’ve had some dramatic events occur around here these last few days that I nearly forgot about (I guess it really wasn’t all that boring in real life). First there was the bobcat that ran in front of the car a couple nights ago when Nani was driving the girls and I home. Then there was the mama and tiny baby bear that went in front of Grumpa’s truck yesterday, during the middle of the day. When he stopped the truck to take a picture the mama bear reared up on her hind legs and encouraged him to continue on his way. Sadie is not reenacting Grumpa being “grrrred” at by a bear and has told us that the bear “bit” him too (she’d developed quite a story by the time he got home from his trip into town). 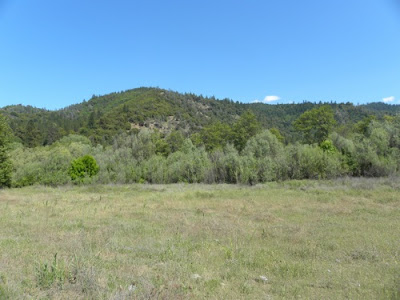 I’m just thankful the mama and baby bear aren’t hanging out in Nani and Grumpa’s yard. Last year there was a rather pathetic look adolescent bear that did that for a few days. He would stare at us in the windows as if he just wanted someone to come out and take care of him (it was amazing how sad and lonely his little eyes looked). Unfortunately for him, we knew better than to interact with him and spent more time inside than we otherwise would have until he found somewhere else to live.

There’s also been a mountain lion around Nani and Grumpa’s town (reported in this weeks paper), snatching cats, but we already had a feeling that was the case after we snapped the pictures that accompany this post a few weeks ago that was clearly (in real life at least) the paw print of a mountain lion (by the time I snapped the picture it was surrounded by deer prints too, but originally it was just the lion print).
Actually, when I come to think about it, I shouldn't be too nervous about alligators in Florida (I should note that the comments I received really did make me feel better: so thank you guys!).
We do have quite a bit of wildlife here. We've had several baby rattle snakes on the porch (when I was about eight months pregnant with Sadie I was sitting on the steps struggling to put my shoes on and Nani came out and calmly told me to get up. When I turned around there was a rattle snake a few feet behind me...). We've had them under vehicles. We've had them near the houses. 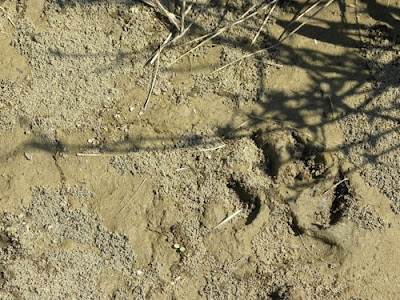 The foxes steal shoes and gloves and mark anything that smells right to them. I got into a little confrontation with one last year when he tried to kill the practically pet grey squirrel that would come up and steal bird seed out of my parents bird seed bag and would visit with Sadie through the window. He turned, quite offended that I'd come out onto the porch (he was about eight feet feet below) and the squirrel got away.
We've seen coyotes around. And there's quite a few deer that view my parents house as an oasis (because of the pasture grass for their horses).
We have ring tailed cats, raccoons and skunks and more ground squirrels (that burrow into gardens and steal green tomatoes) than can possibly be counted. And there are the bald eagles and golden eagles and ospreys that hang out here too.
So I guess we're more used to dangerous wild life (the mountain lions, mama bears and occasional hungry coyotes) than I immediately realize (we've lost two cats to mountain lions and had numerous horse attacks over the years)...
Posted by Cammie Diane at 11:09 AM