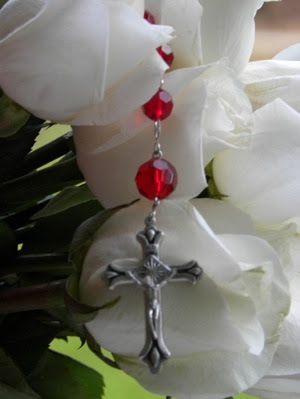 Lately it seems as if I just keep stumbling across stories in the media where the writer describes their conversion, away from Catholicism, usually citing a "Catholic" belief as the reason for their departure, that isn't actually a real Catholic teaching (or is in fact directly contrary to Catholic teaching).
In one recent article the writer said her Catholic mother was part of the "cult of Mary" and raised her and her sister's to put Mary before God. In another the speaker acted as if Catholic's can't have a "personal relationship with God" and that he "finally found the church that he should have been born into."
It's so sad that people leave the Church (and the Eucharist), without truly understanding what their faith teaches, and then spend their lives "recovering" (the new trendy term used by some who've "left" the Church) from something that wasn't actually real.
It's one thing if a person thoroughly understands what the Church teaches and rejects it. It's another if they have an understanding of Church teaching comparable to a toddler (or an understanding worse than a toddler) and then throw out reason after reason that isn't grounded in reality, as if it were the truth. Adding to the tragedy is that other non-Catholics hear these lies (although they are usually unknowing lies) from a "recovering Cradle Catholic" and believe that that is, in fact, what the Church teaches. After all, it came from someone who was "Catholic" for twenty some years and must be true.
The same old litany of complaints begins: Catholics worship statues... Catholics worship Mary... Catholics don't read the Bible...
If the speaker did a tiny bit of research the arguments would fall quickly to pieces... but that amount of effort appears to be too much for some, and they embrace what they are told by people who really don't understand the Church, and don't really care to.
The best way to learn about a religion is to read it's actual texts to find out what it actually teaches. Reading tracts from groups that have a vested interest in luring people away means that you will be learning about a religion second hand, through (what is very likely) a thickly distorted lens.
Before becoming Catholic I did explore other religions. I took classes on Islam (from Muslim teachers) and studied the Koran. I took classes on Eastern Religions and studied the Bhagavad Geeta, The Hundred Thousand Songs of Milarepa, the Tao Te Ching, and the Analects. And I found bits and pieces of truth along the way.
Then I began to read the Bible. And I began to pray more.
My past reading primary texts ultimately helped me find my way home to the Church. John 21 ("Feed my sheep") and Matthew 16 (the "keys to the kingdom") were big for me. John 6 was huge. And as time goes on other verses stand out and are illuminated. Lately Matthew 5 has stood out since I heard an apologist explain that this was Jesus' promise that the legacy that He was leaving behind (the Church) would be easy to identify (and from this we can also gather that it would be there all along... which is also part of the promise He makes in Matthew 16 when he says that the Gates of Hell will not prevail against it, which is, by the way, my favorite Bible verse of all time [wait a second! Catholics can have favorite Bible verse?!?!... just kidding...]!):

"You are light for the world. A city built on a hill-top cannot be hidden. No one lights a lamp to put it under a tub; they put it on the lamp-stand where it shines for everyone in the house."

The media is always eager for an "I used to be Catholic story." With better catechesis I think we will begin to hear less and less of them. At least that is my prayer.
On a side note... I think I have a problem with overusing ellipses. I've been trying to work on that, but tonight I think I've failed... and I'm too sleepy to fix it!
Posted by Cammie Diane at 11:44 PM