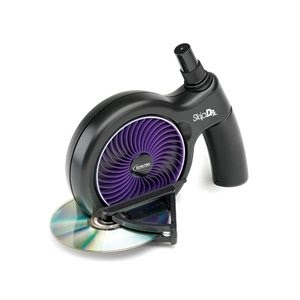 This post sounds like a paid infomercial when I thought of it in my head... but it's not! I've in no way been compensated.
This is one of those posts where I've found something so incredibly useful that I just have to share with other moms out there who may have small destructo-bunnies with hands that frequently wreak havoc on their DVD collections.
Our DVDs are in a cabinet with a lever type of lock on it. The lock foiled Mae until she was about seven months old. Then she figured it out (around the same time that Sadie realized that she wasn't allowed to open the cabinet) and there's been no peace in our living room since that realization. I've tried different ways of keeping it closed but the lever pops open most of those methods if she yanks hard enough.
These days Mae has four "activities" that take up 80% of her waking time (in other words, the time in which she isn't eating). The activities, in no particular order are: 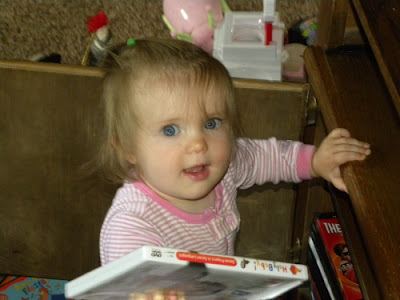 1) Opening the cabinet and pulling out every single DVD case that we own and then attempting to stand up on top of the DVD cases and slip from side to side (the standing up on the DVDs is new... before she just enjoyed shaking each case as hard as she could and throwing them).
2) Crawling over to my exercise bike and attempting to climb up onto the seat to "ride" it.
3) Clearing everything off the table that the phone is on, yanking the phone off the table, and then swinging the phone from the cord that attaches it to the wall (and the cords are carefully tucked away and hidden, until she yanks them out into the open).
4) Seeking out any piece of mail that is mistakenly left at "baby level" (which includes all the tables these days) and throwing it on the ground and then shredding it. 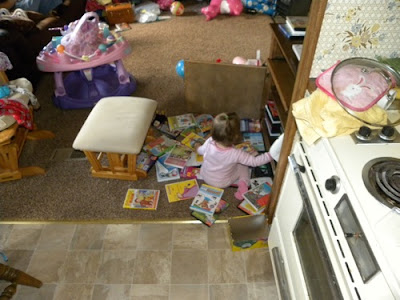 The most important of these, for the purpose of this post, is #1. Here's a picture Paul snapped this morning of Mae going about her work.
Until recently, I thought that the only problem with this activity was the mess. But since Mae's shaking of the DVDs has become more vigorous, we've seen more and more scratched DVDs that either freeze or become strange little box-like-pixels with sound problems thrown in.
We ran into this problem with Sadie a while back, so I already had the Skip Doctor DVD repair system (and backup refills).
I was a bit nervous that I'd be able to figure out the "repair system" on my own. It's pretty simple. You spray the DVD with the little spray solution, slip it into the Skip Doctor and crank the handle for about a minute (as long as it takes the DVD to go around) for the DVDs that are really scratched (those are usually the ones with the little boxes) it usually takes two times through. Then you buff it with a little pad and then shine it with a cloth that's included. The Skip Doctor doesn't work on super deep scratches, but it's worked on all the scratches that we have (and some of those seemed pretty deep to me!).
It's saved around ten of our DVDs at this point (Aladdin, Dora, Diego, Muzzy and Curious George are all on the list!). The Muzzy DVD (which is part of a set that isn't sold individually) was the one that sold us on the idea. So if you have a destructo-bunny in your house... and mildly scratched DVDs, this is, in my opinion, a pretty good investment. It pays for itself after around two DVDs...
Posted by Cammie Diane at 11:34 AM