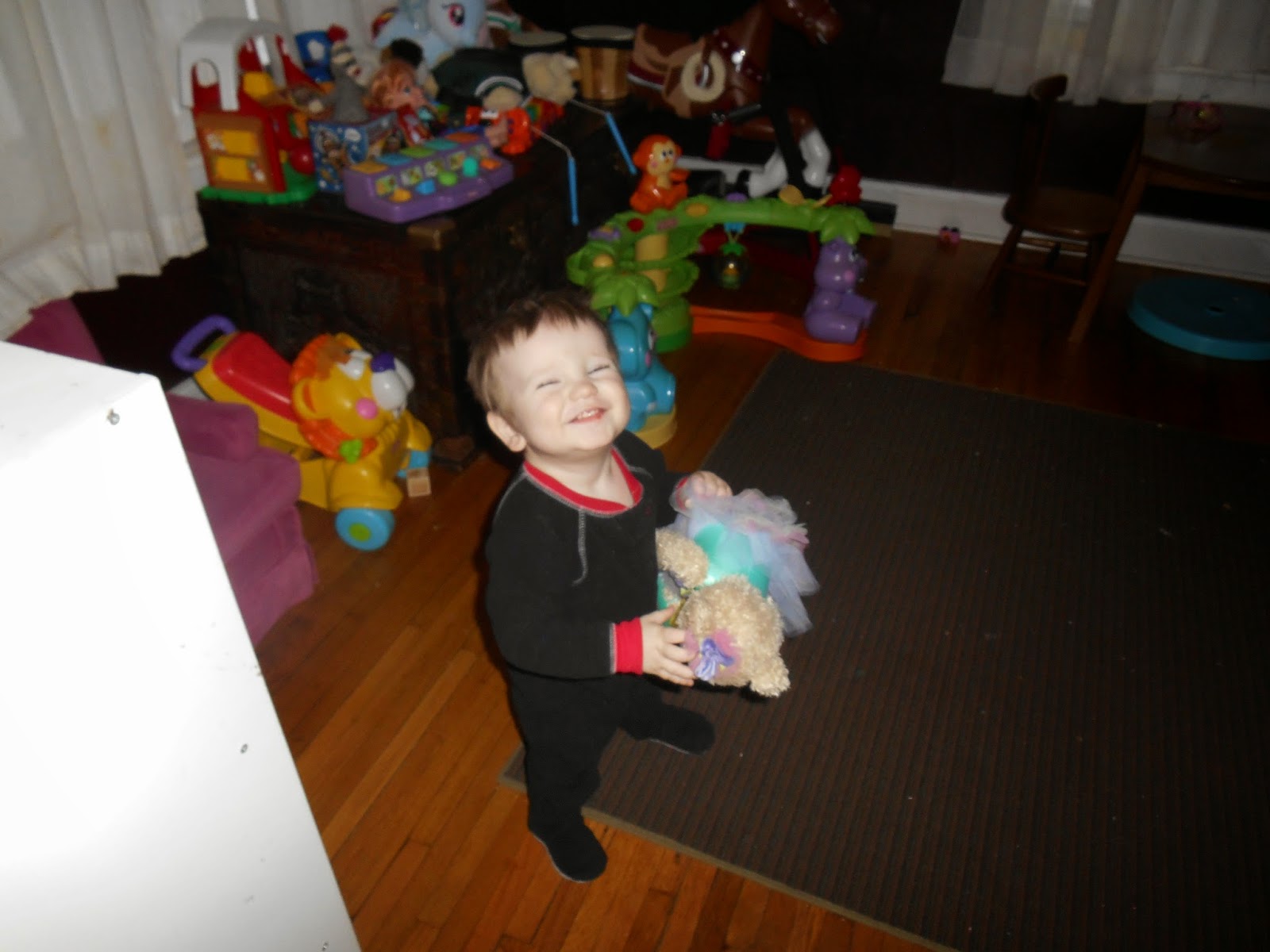 Patrick still thinks it's hilarious not to say "Mama."  He says "Maggie" and "Sadie."  He shouts "Daddy" every minute or so.  He's said "Nikki" (one of the therapists names) and "Chinta" (a chinchilla on an episode of Diego).  He can say "Please" and "Thank you" or "thanks."  But "Mama?"  Our conversations go something like this:

Okay, so he slips up and says "Mama" about once a week before he remembers that it's way, way funnier to call me Daddy and then laugh about it.

After two days of cold my computer is telling me it's 33 degrees outside.  This likely means that Paul will be wearing a t-shirt after being outside for approximately 10 seconds.

And I'm still hoping that the snow melts in the next (now less than) two weeks before my parents arrive for a visit, because I have this image of my head of taking them to all the parks and outdoor places we go, and in this little picture it's not a frozen wasteland of snow, so... here's hoping it really is 40+ today... and here's hoping the snow actually melts:

I started this post this morning but was sidetracked for pretty much the entire day and just got back to it now.  Paul tells me that it was 50 degrees today and I definitely believe him.  It looks like we lost most of the new snow today.  Dare I hope we don't get any more this season?

I know, I know, it's probably too early to have such warm spring-like hopes... but still... I just can't help it! 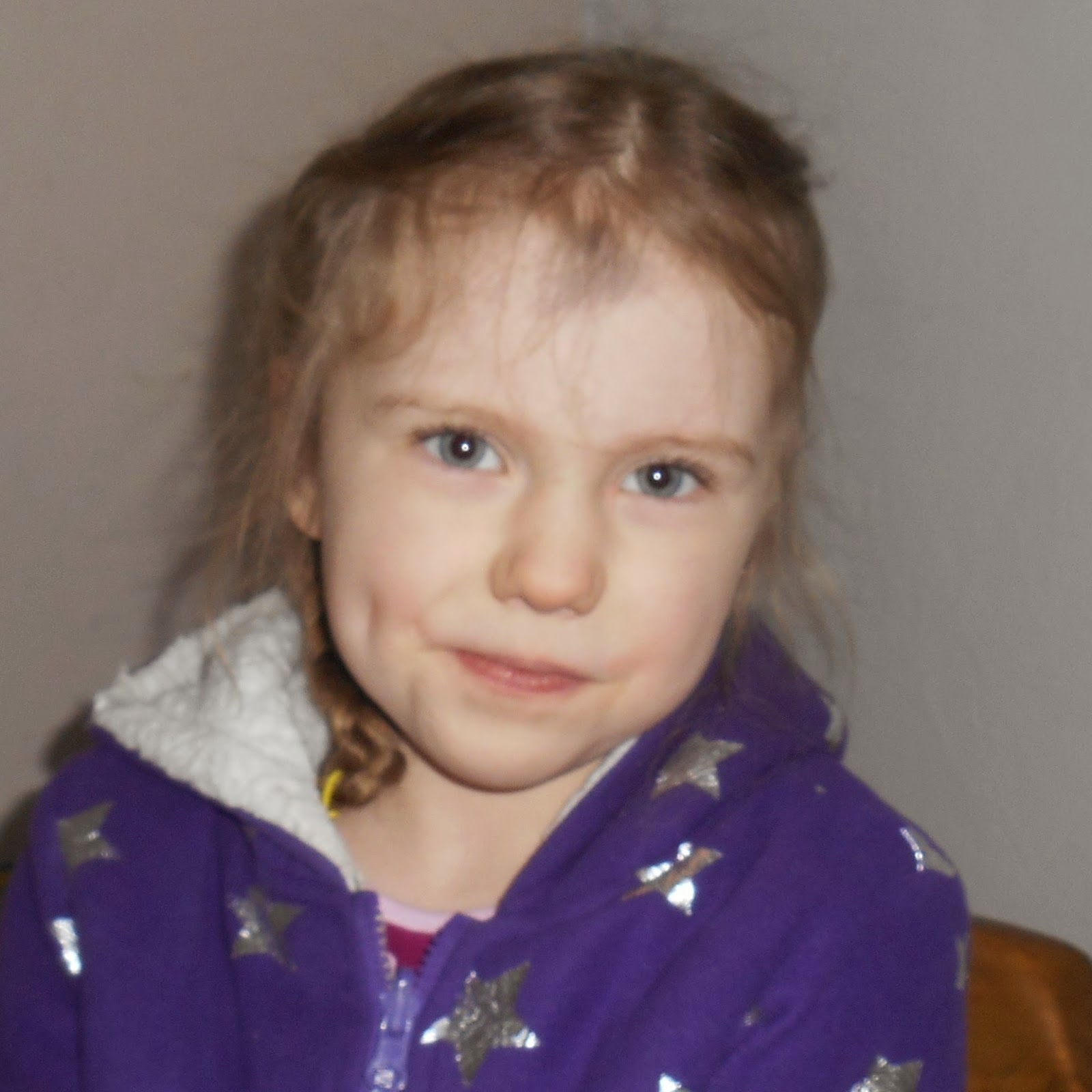 She had quite the day to day when she suddenly started screaming in pain and crying in the car while we were out doing errands.  Since she's a pretty tough little kid who seldom cries when she's hurt of in pain, Paul and I paid attention right away.

After a very scary afternoon we're now home, watching her, with orders to go in to the ER if she feels sick at all since the worry was appendicitis because of where the pain was and how it seemed to rebound on the right side.

The pain eased up about 10 seconds before we were about to walk through the doors of the ER and her doctor's office told me just to watch her very carefully but it's still nerve wracking.

Maggie has been incredibly happy since yesterday morning.

And it just so happens that yesterday morning was the 14th day since we realized that she was having wheat by sneaking playdough during therapy (and eliminated that source of gluten).

She woke up with a huge smile and said a ton of words during therapy.  Once a week she goes into the therapy center with Paul and while they were walking through the building she saw one of her therapists working at a computer through a window and tried to get her attention to say "hi" to her.  And today she waved goodbye several times to that same therapist (waving, like pointing, is a big deal).

Even though I've seen how it takes about (okay, exactly) two weeks for wheat to get out of her system it still shocks me when I see how dramatic the difference is and how exact the length of time is.

This pregnancy is the first time I've ever had morning sickness that was actually in the morning.

Actually I'm really looking forward to finding out if my mild vs bad morning sickness pattern as an indicator of gender holds true (for me, I know other people have the opposite or totally different experiences where there's no pattern at all!).

Another conversation with Sadie.  I'm starting to think she mis-hears what I saw on purpose just so she can make conversations extra silly... because this happens at least once a day: