Yesterday there was a rush to sit in the stroller.  I think my oldest and my youngest children were suffering from a delusion that we were going to go out walking even though it had been lightly snowing all morning and with the way I've been feeling lately (not great, but not horrible, just kind of first-trimester-I-don't-want-to-move-blah...) I wasn't quite willing to bundle everyone up to walk around the block while snow flakes drifted down on us.

So Patrick climbed into the front seat and sat down and began to bicker with Sadie over one of the three cup holders that we don't actually use because the kids detach them and throw them on the ground.  Sadie wanted to pretend it was a megaphone and sing into it and Patrick wanted to pretend it was a hammer and wanted to whack his sister with it.  After a few minutes of back and forth over who would control the cup holder (while ignoring my suggestions that they pick up one of the other two identical cup holders that were a few feet away) I heard Sadie say:

"Patch.  I think we need to talk about our feelings."

I glanced over about ten seconds later in time to see him trying to hit her with the cup holder.  Apparently their talk didn't go all that well.

Do you remember Rey's Swimwear, the new swimwear company that released a bunch of super cute modest suits last year?

Well this year if they get enough orders they'll be making little girls suits too!

I have a favorite.  The Madeline (although I think I like the "lemon" print the best!).


Then again, the Eloise is really cute too (and it's a swimdress in three different colors!):

I've been watching this company since I first saw the video of the founder speaking about how she came up with the idea for the swimsuits last year and I just can't wait to see what they come up with next.

My favorite grown up suit is the Caroline, but I have a feeling it wouldn't work with a baby bump!

I saw a sale this morning that I am just barely, barely resisting.  If we knew if this baby was a boy or a girl I would not be resisting at all because a triple stacked sale would be just too much to resist.

Basically right now Carter's is offering 50% off all the clothing on their site.  In addition to that Ebates has a coupon code on it's site that takes another 20% off the remaining price, plus by going through Ebates you get 3.5% back (and I can vouch that you really do because I've been using Ebates for a couple of years now!).

All you have to do is go to Ebates and use your account to search for Carter's.  It will bring up a link (and you'll see the 20% off code) and you follow that link to the site (which will also give you 3.5% back).

Not a bad deal if you're in the market for baby clothes at the moment!

Yesterday was a special kind of exhausting.  I snapped this picture shortly before bedtime.  Maggie and Patrick have dumped a bin of toys out under the table and I've given up trying to gain any semblance of organization before bedtime. 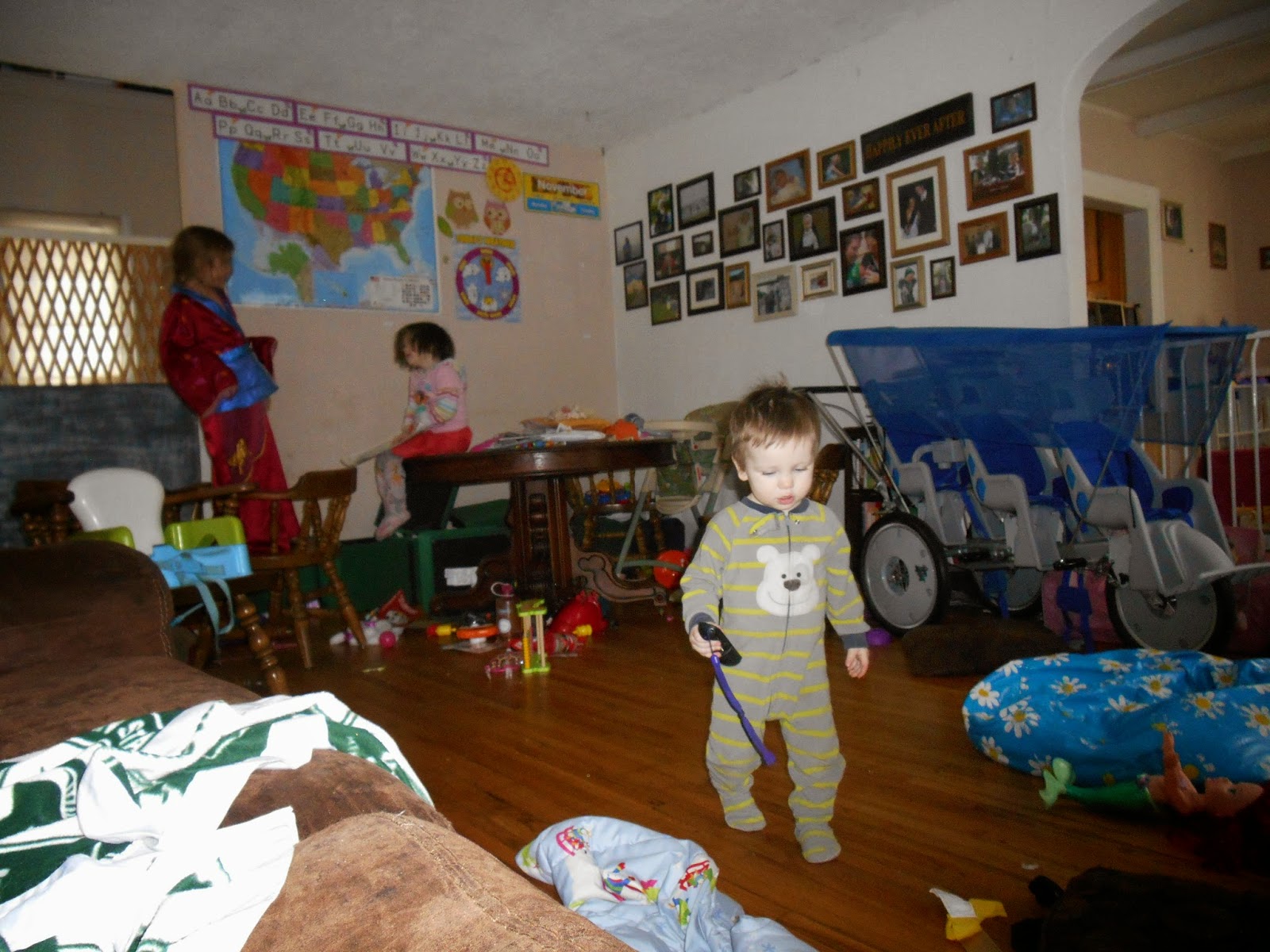 Here's Maggie playing Dora.  She's standing on the table looking at a map while saying "Map!  Map!" and ignoring me while I say "Abajo!  Abajo!" (a word that we definitely know she knows since she uses it correctly a half dozen times a day. 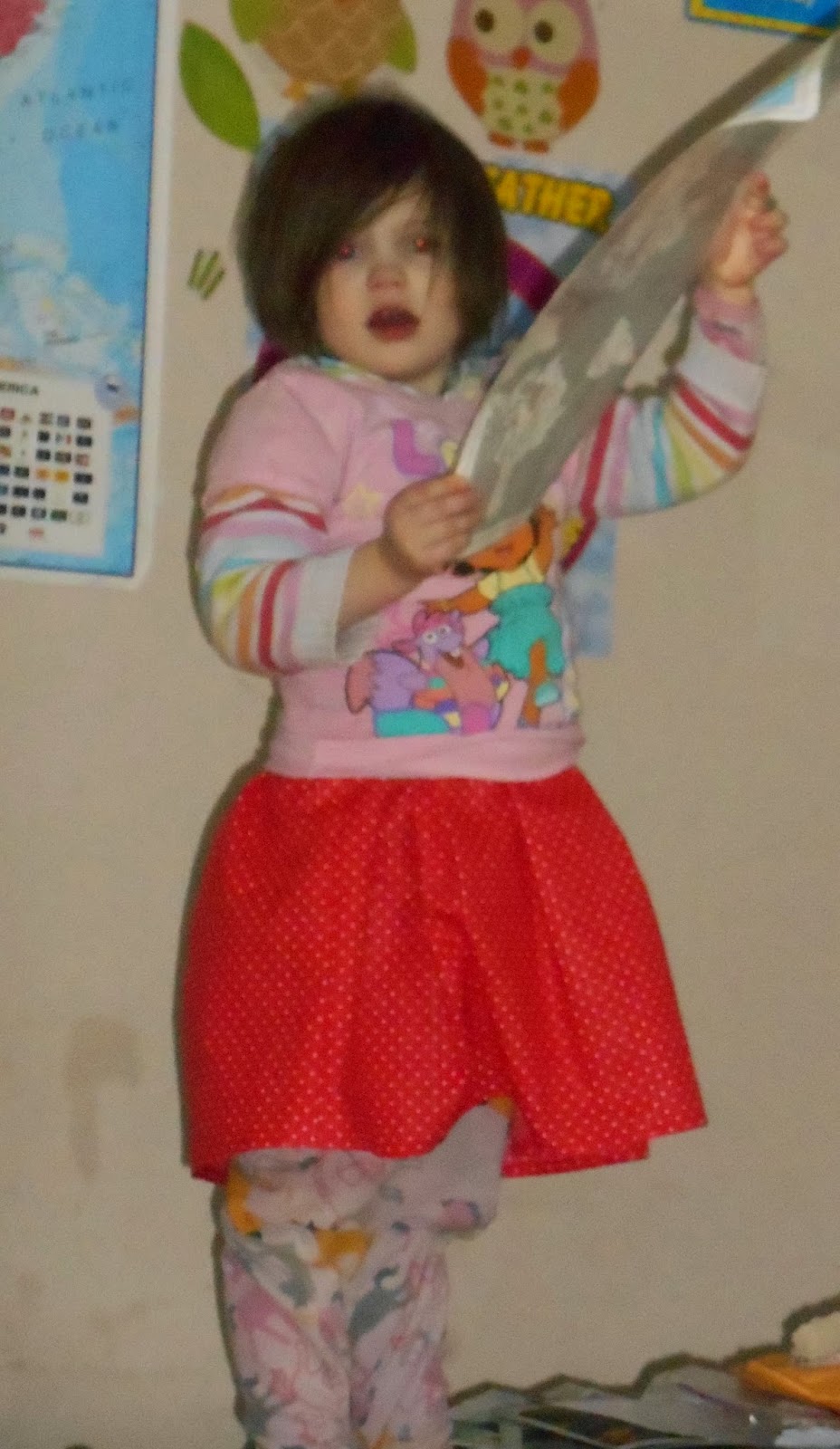 He thinks that he's mastered the art of using a spoon, but really... I try not to watch, while at the same time trying to remove his bowl the second he's done before he decides to throw it.

I ordered some suction cup bowls from Amazon prime after we lost a second bowl in two days (I figured $7 to buy 3 suction cup bowls was cheaper than replacing our much used dinner set bowls) and I'm hoping they're the answer to Mr. Clears-His-Tray-Himself-the-Second-He's-Finished and his quick throwy hands. 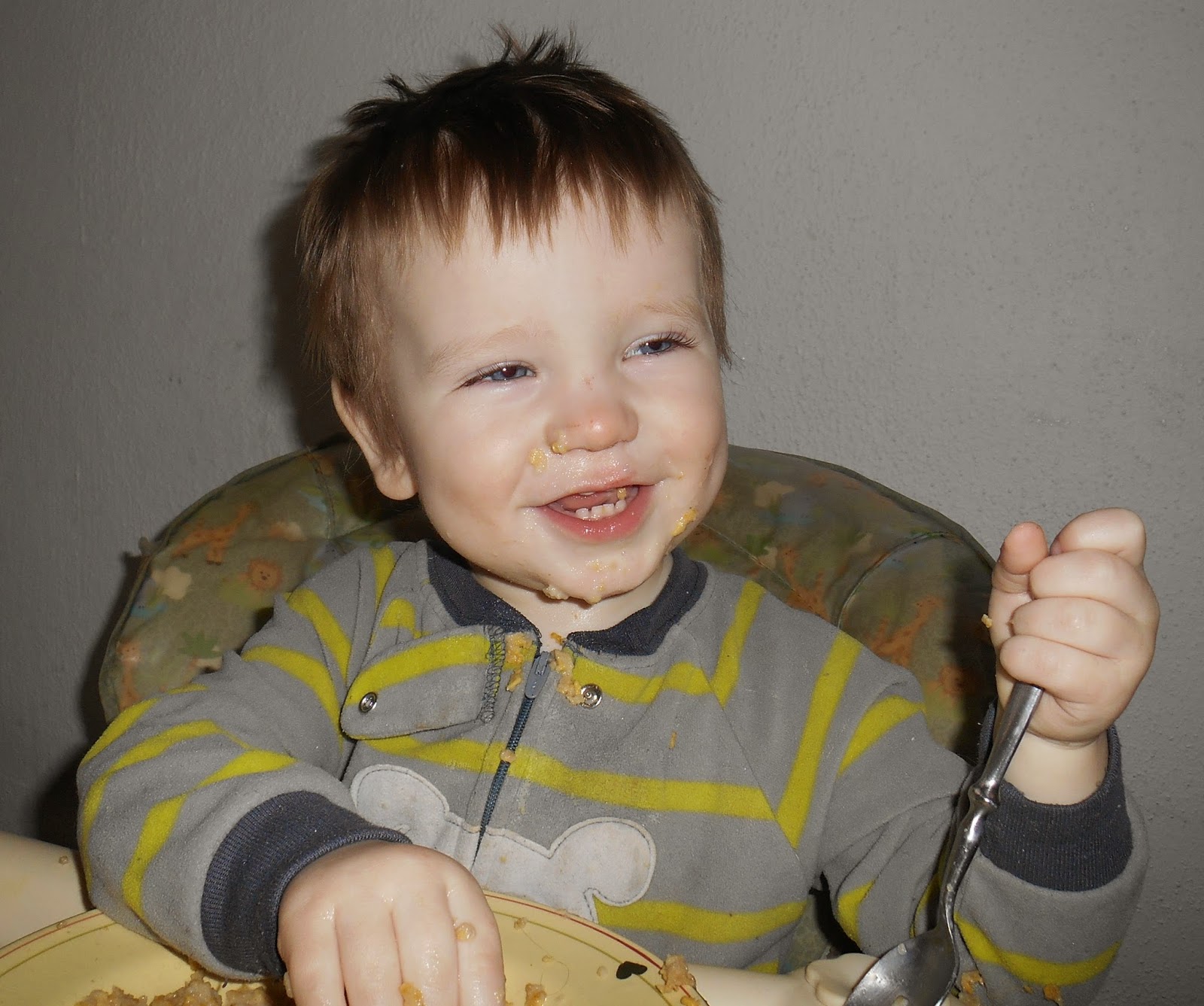 Here's Mae's Outfit of the Week.

You know what you would never know about Maggie from looking at most of her pictures?  How teeny tiny she actually is.  She's been at roughly the same weight since she was a chunky one year old, while shooting up into a willowy three and a half year old.

It's hard to tell though in most pictures, or even in real life, because our little sensory girl loves layers.  Here's what she picked out today.  She has on a backwards sleeper with a zip up sweater that she had me put on and take off her three times before deciding that it was going to stay. She put on a dress that Nani made for her over the sweater and then came and brought me a Dora t-shirt that she demanded I help her into that she's wearing over the dress.

If she'd remembered that she'd put her long sleeve Sofia shirt into a box earlier in the day I'm pretty sure she would be wearing it too. 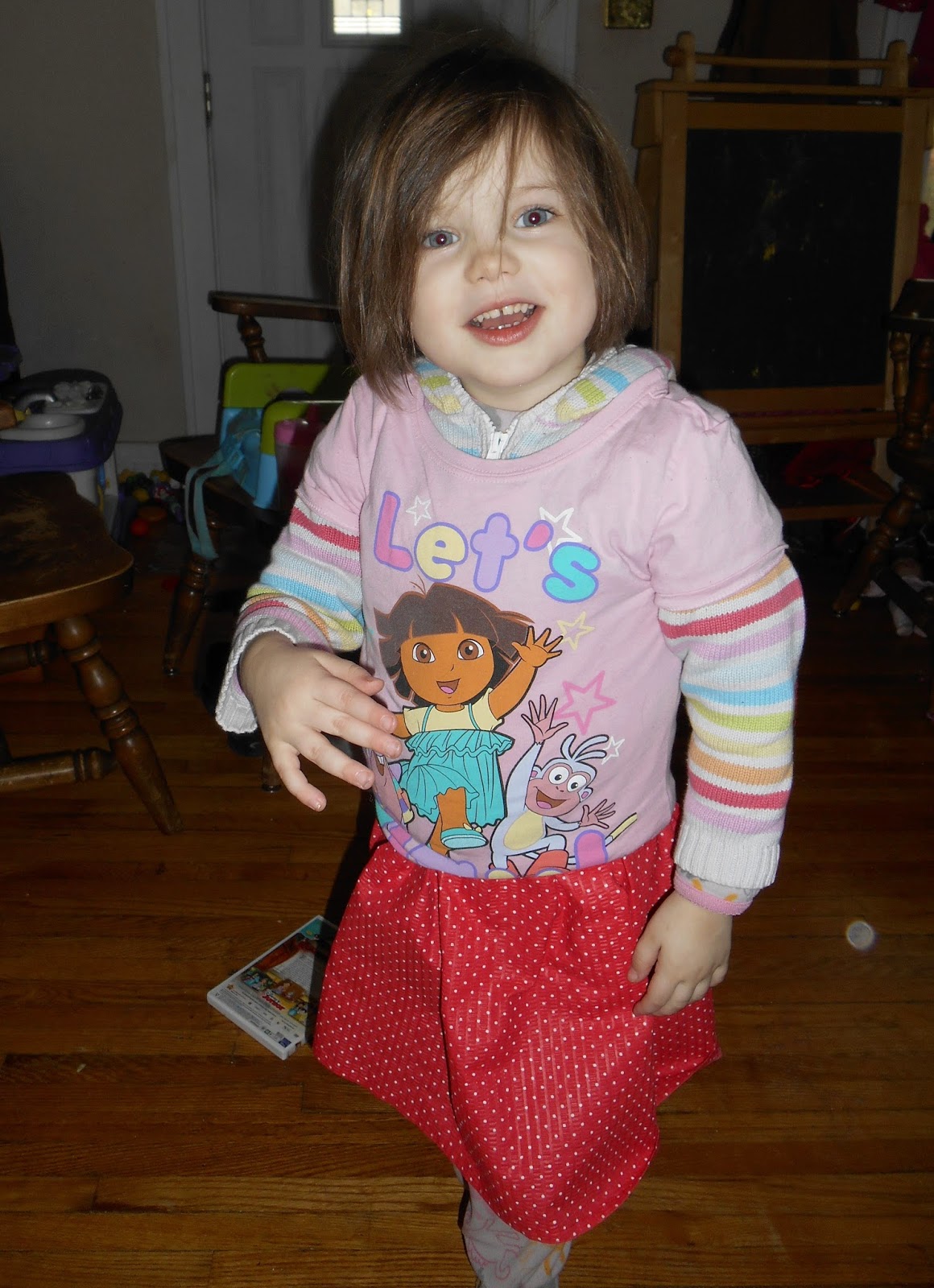 Yesterday I printed out a receipt, handed him a burrito and sent him out of the house after the kids went to bed with specific instructions: Come back with the right burrito.

Or maybe it would be more accurate to say that first trimester food aversions have hit and I'm desperately trying to find things that I can eat more than one bite of without feeling sick.  Which made the burrito very, very important in my little food focused brain.

You see the other night I made another dinner I couldn't bring myself to eat and tucked the babies into bed and then looked and Paul and begged him to go to Chipotle and pick up the burrito that I would very quickly order online.  In my head it was the perfect plan.  At this point I can't eat much and one burrito will make at least three meals for me.  Paul wearily agreed and went to go get one before buckling down to study.

Fast forward one hour.  The burrito arrives.  I excitedly bite into it and see... corn.  More specifically, corn salsa (and not green chili salsa). I try to eat it.  Yuck.  There are many things that my first trimester taste buds cannot tolerate that I usually like (among them avocado, meat, eggs... pretty much everything I usually love) and apparently corn joins the list, tasting sickeningly sweet.  I sigh and throw myself dramatically on the couch.

I go to bed.  The next day I check and find the order receipt email and make sure no salsa and then go upstairs and tell Paul that he can tell them that I'm pregnant and insane... simply insane... I just can't eat that burrito.

Last night he returned with the perfect burrito and so far it's looking like it will make three meals, which makes it a pretty good deal (okay, anything that sounds good right now sounds like a "pretty good deal" to me).

Is it the second trimester yet?  Less than three weeks to go...


For more Quick Takes, visit Conversion Diary!
Posted by Cammie Diane at 1:00 AM