I had this great idea today.

It felt brilliant when I was planning it out.  The last time we went on a walk (outside and not around the mall in circles while it's -19 with windchill outside) was some time around November and all the being in the house while Paul has the car all day and night was driving me insane.

I couldn't take being cooped up for a minute longer (especially with all these deceptive blue sky 0 degree days that have been creeping in).  When it hit 33 I packed up the kids.  When we left I checked again and my computer was now claiming that it was 37 outside, which basically shows how long it takes to get them ready.  And so we headed out into the beautiful day, ready for spring (or to wrestle a spring like experience from an ankle deep in snow sort of day).

As we entered the long driveway to the zoo Patrick, who'd been happy up until that point, burst into tears.  He held up his hands to show me that they were cold (he had on layers and a snow suit which I thought was overkill since it was above freezing, but the kid won't keep anything on his hands) and then firmly refused to keep them covered.  Finally I took of my sweat shirt and put it on him, tucking the sleeves under him and knowing he would have to keep them bundled since he wouldn't be able to get them out.  After five minutes of howling and many betrayed looks he finally realized they actually felt better and he started smiling again. 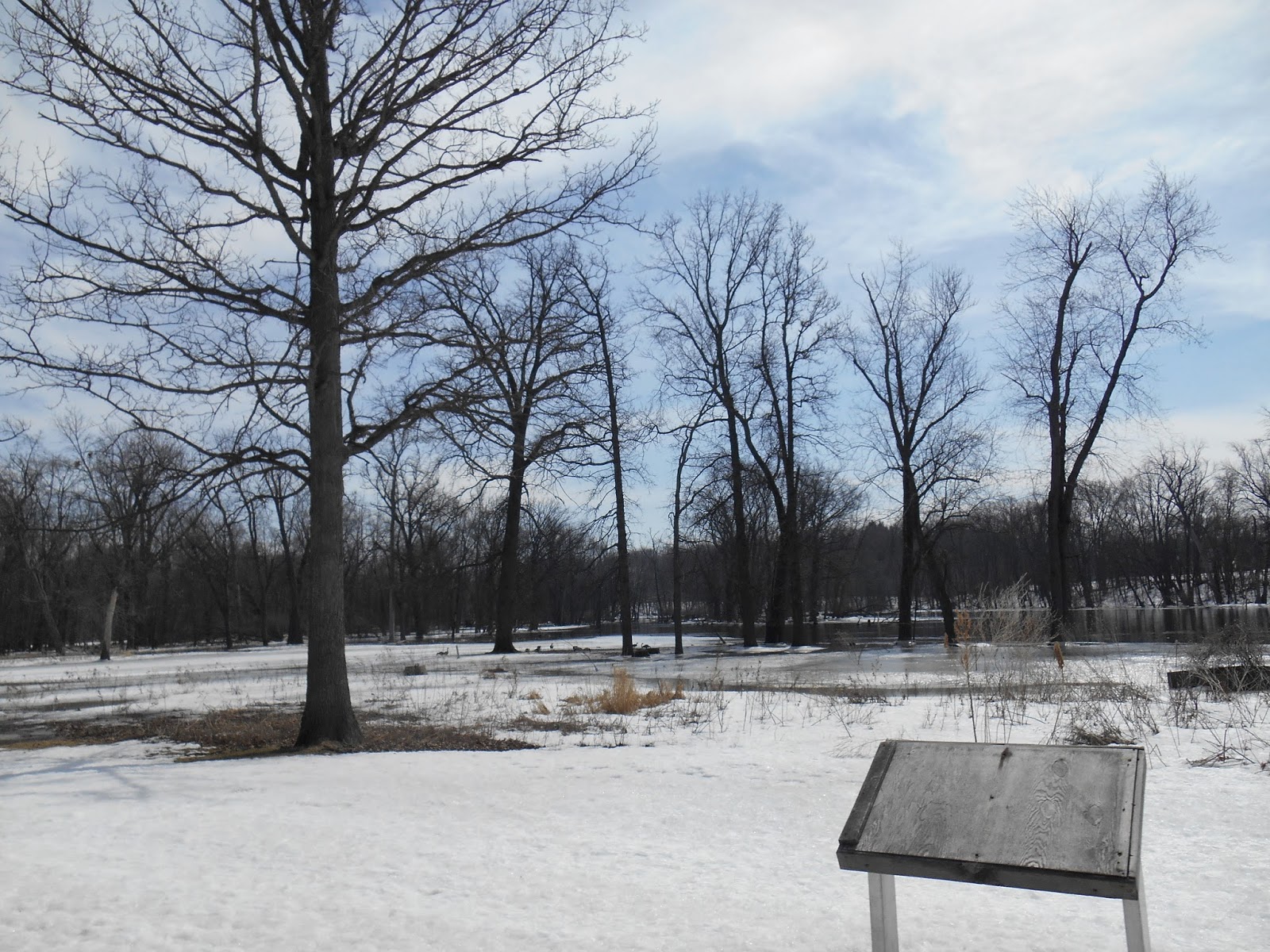 Honking geese stopped us here and we snapped a few pictures as they strolled across the ice in front of us.  As we walked along I wondered if the place would be empty.  We hadn't seen any cars drive by.  Maybe other people were just saner than we were?  Then I looked ahead and realized that it was simply because everyone was already there (you probably can't count it in this picture but there are three buses in the parking lot).  Apparently we weren't the only ones looking for a place to go to enjoy the weather! 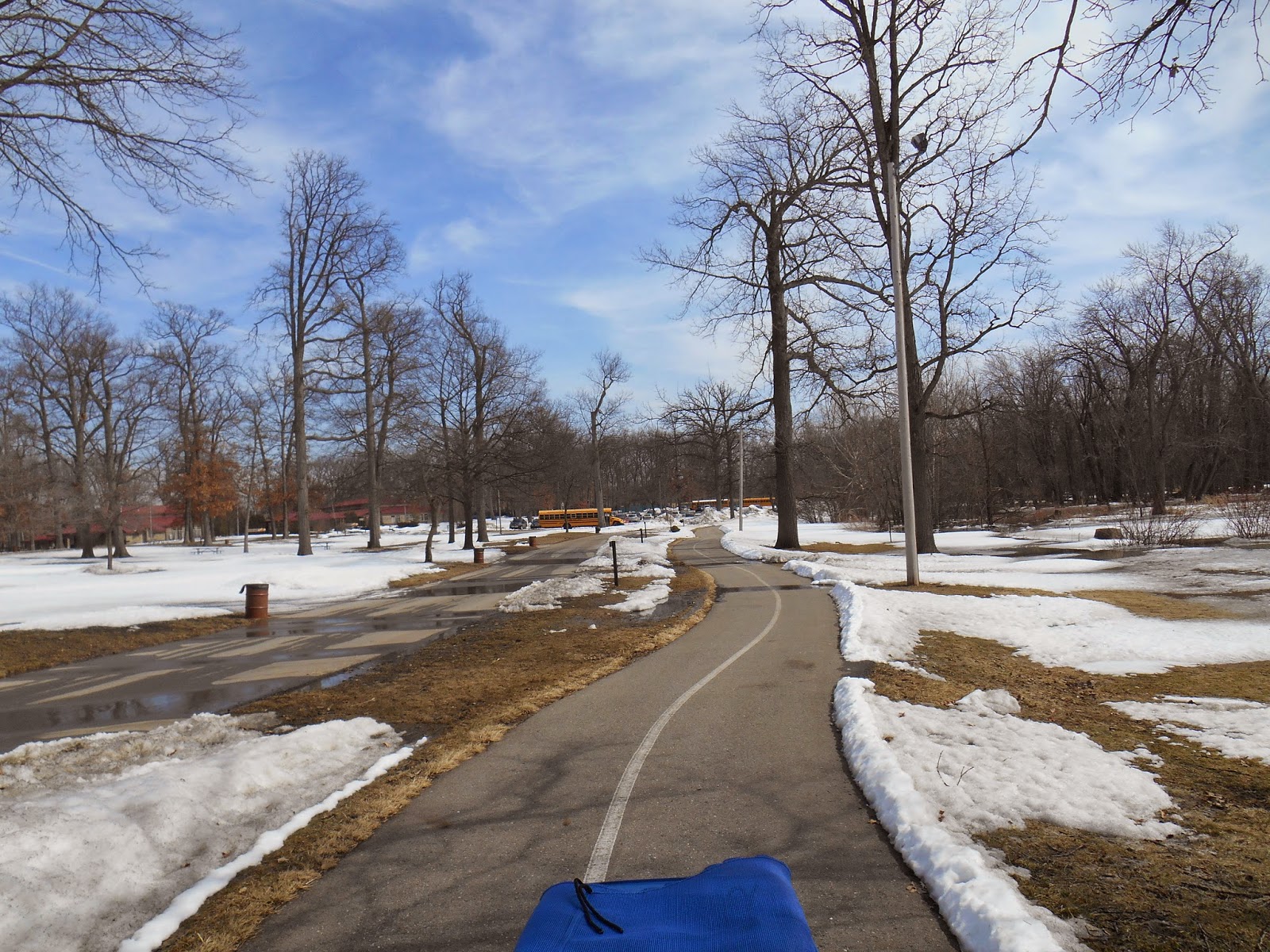 According to Google Walking Maps the path I took was 2.8 miles each way... and as I approached the zoo I began to doubt my decision to walk that far.

Doesn't this happen every year?  I majorly over estimate my ability to walk certain distances when starting out after winter (particularly in the first trimester)?  Well today, for once, it worked out.  And the kids got some sorely needed fresh air. 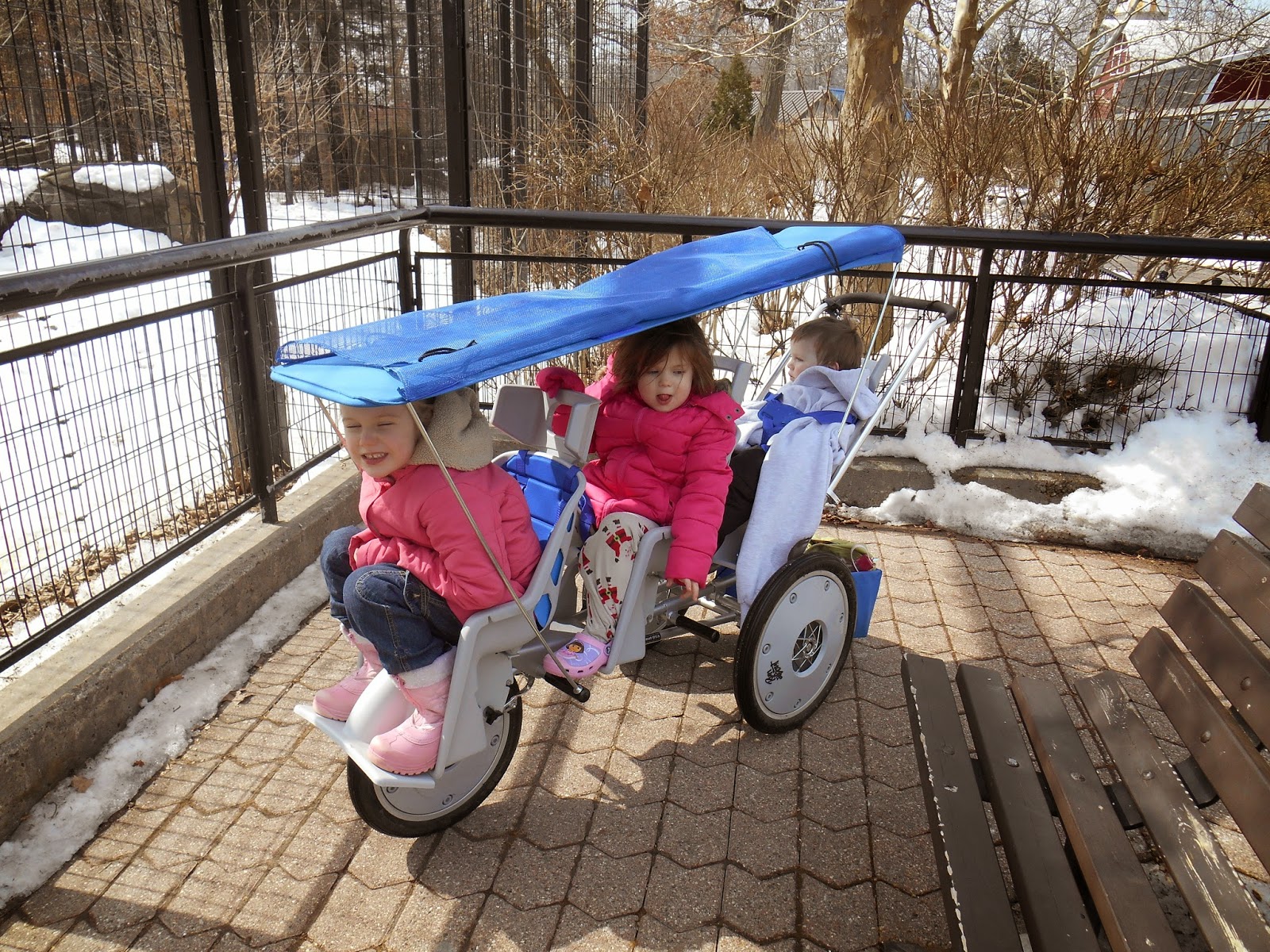 In other news while the stroller is pretty easy to push even with all three kids in it (when they're all in it it weighs about 175 lbs), it feels practically weightless during the stretches when Sadie walked next to me.

At my last appointment the Nurse Practitioner who does intake asked me how much exercise I get.  I laughed and said something like "well if you could chasing after a 5 year old, a 3 year old and a 1 year old, then a lot!" and I believe she wrote down "none."

The truth is, I don't exercise.  But in my non-first-trimester life, I also usually don't really sit down during the day unless I'm doing school with Sadie.

In college I went to the gym pretty much every day to do cardio and lift weights.  I surfed.  I played rugby.  I worked at the pool and I'd swim a mile or two.

And I'm pretty sure that I was never as physically exhausted as I am on an average day chasing and lifting my three.  I'm lifting a 50 lb, a 35 lb and a 25 lb child on a pretty regular basis (I have to help Sadie over our maze of baby gates when I'm too lazy to deconstruct them), and I'm chasing, wrangling and playing with them all day long.  When it's not frozen it's not unusual for us to walk around 5-6 miles a day just going places.  We don't really walk to walk.  We walk to get here and there and everywhere.

So no, I don't exercise to exercise anymore.  I don't have the time or energy for that.  But life, even life trapped within these four walls during the dead of winter, isn't exactly sedentary either!  I guess it's kind of like the question "do you work?" 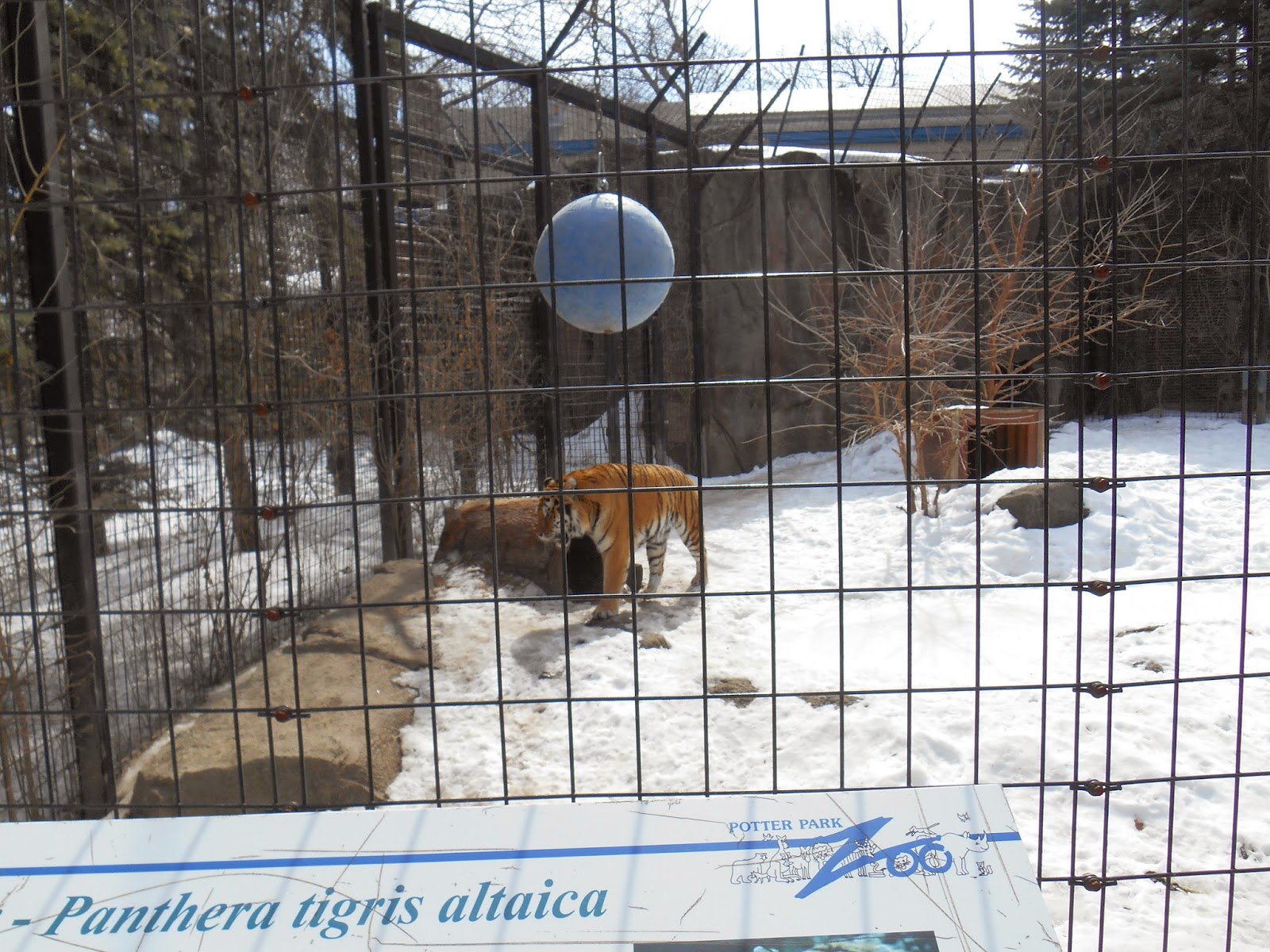 Now back to the point of this post about going to the zoo.  I'm so easily sidetracked.  The tiger was definitely the hit of the afternoon.  He walked right up to us and marked the fence, which resulted in a lively conversation about "spraying." 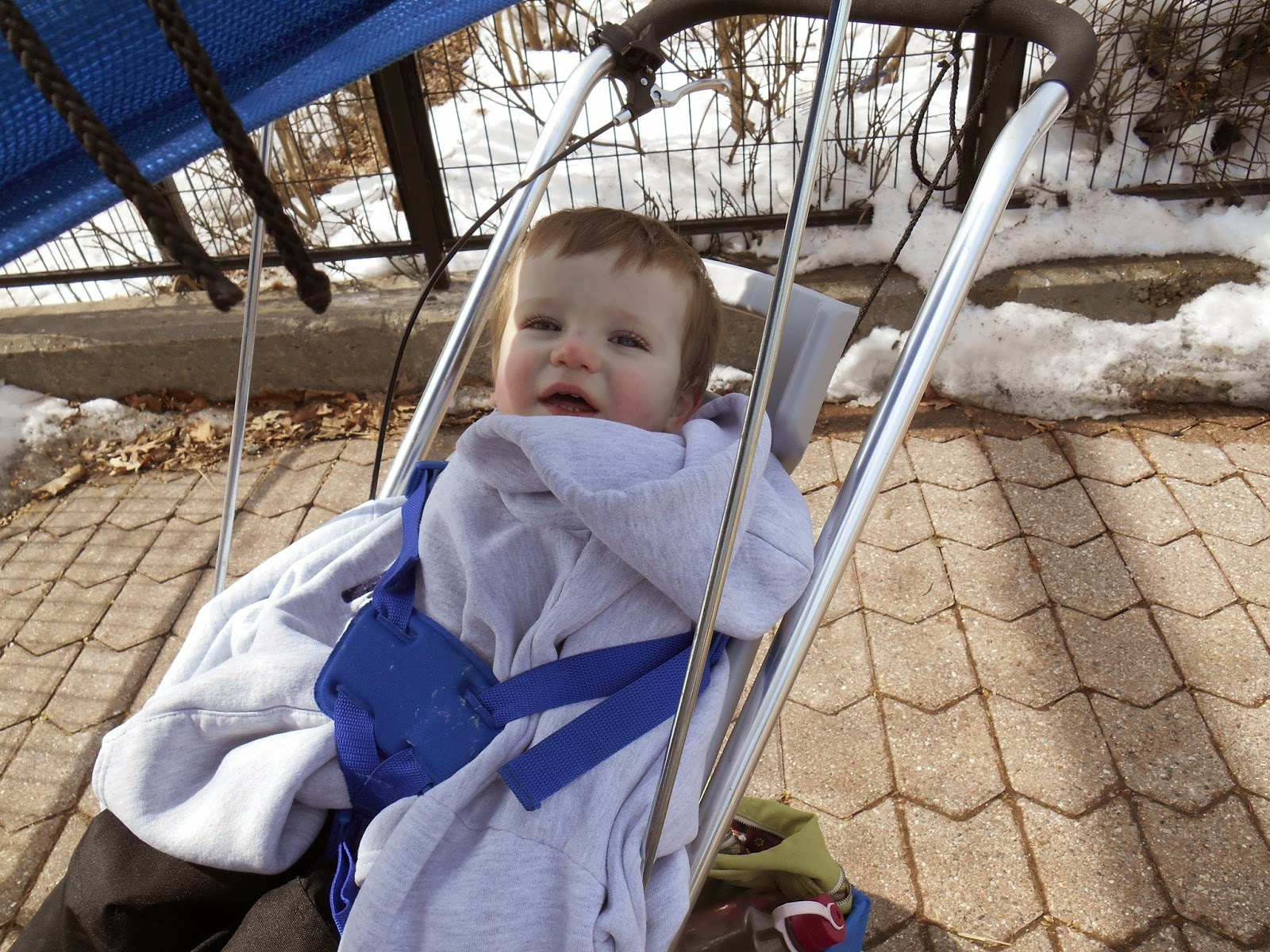 Finally we stopped by the wolves who looked like they were enjoying the weather and then began the long hike home. 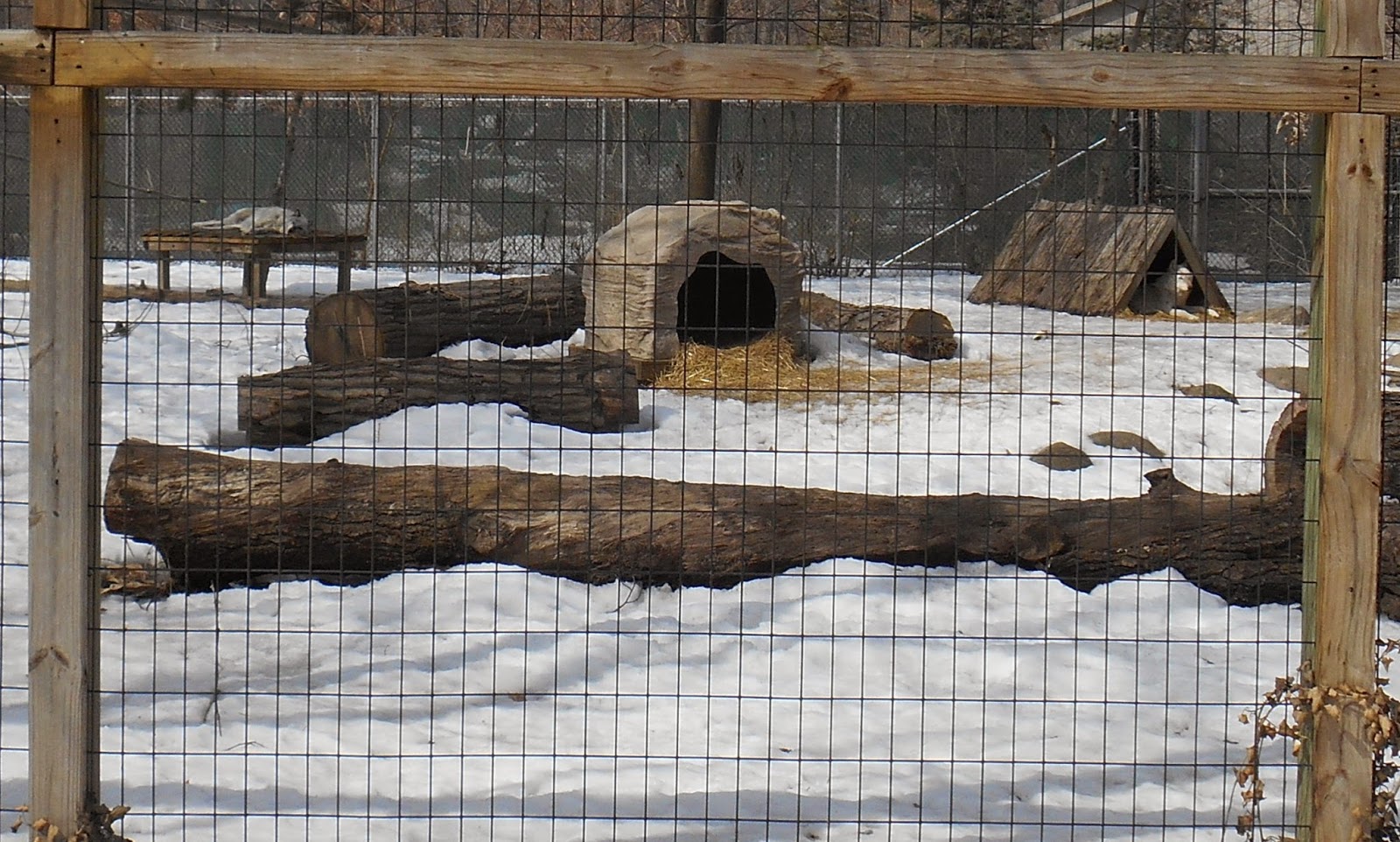 And we made it!

Then Paul came home early after several days of an insane work load, which is a nice surprise to end a nice day!

In totally unrelated news, Maggie said 42 spontaneous words today during therapy (that we caught!)!  She's putting phrases together and using them in context and we're all constantly amazed by her progress!  On the walk today she was singing "walk, walk, walk" to herself.  She also was super excited when she heard "let it go" being sung in Spanish and she ran over and started to sing the melody along with it (one of her therapists is fluent in Spanish and has been speaking it with her a bit, after discovering that Mae loves the language far more than her native tongue!).

And she loves being able to tell us, little by little, what's on her mind!
Posted by Cammie Diane at 7:13 PM