Kitty Fish nearly fell out of my favor tonight.  You see, it started when I forget, yet again, that if I attempt to plug in the iron while the heater is on, the upstairs will almost instantly be cloaked in darkness.  So I stumbled down to the basement with Kitty following close behind me and then headed back upstairs where the lights were on but an unusual silence had filled the three small bedrooms. I knew what that meant.  Both the heater and the white noise machine in Patrick's room hadn't turned back on when the power came back on.

So I tiptoed into the room and decided to turn on the noise machine first and then attempt to turn the heater back on without waking him (turning the heater to the correct setting involves it beeping loudly four times).  His little head jerked up at the final beep and I rushed over to rub his back as he dropped back onto the mattress and closed his eyes.  Weaning him has been remarkable pain free for both of us, but I still didn't want to risk an unneeded night wakening.

And then I heard it. Kitty had followed me in and was telling a horrible lie about how he had a mouse and he wanted me to look at it.  I glanced at him to make sure that this wasn't in fact the case (it wasn't) and attempted to gesture for him to leave while Patch's eyes flickered open again and I continued to make hushing noises while patting his back.

Thankfully I escaped, he went back to sleep without a peep, and Kitty fish was left to his dreams of mouse catching.

In totally unrelated news Maggie had an awesome day today.  She sang twinkle, twinkle little star over and over again.  She said 38 spontaneous words plus a bunch more that she was prompted to say during her three hours of therapy this morning.

The day got off to a promising start when she woke up and started calling "I go now!  I go now!" down to Paul who was already downstairs with Patrick.  Remember this is a child who had maybe a half dozen words six months ago.

At the start of therapy she was clingy.  She kept coming over to sit by me and climbing up into my lap and holding my hand. Her therapist stuck with her and after about an hour she really started to warm up.

We've had a tough couple of months where she went from loving therapy to becoming an expert at avoiding having to do anything, and while a discussion about goals and communication let Paul and I know we were on the same page about where we were headed with therapy (and also led to staffing changes at our request), the last couple weeks have been better, but still a struggle.  Mae had developed an aversion to therapy and that isn't going to disappear overnight.

Since the two week point of our playdough-gluten discovery we've had a dramatic improvement, with her smiling and laughing pretty much all day long, but I was still waiting and hoping that therapy would get back on track and that Maggie would start enjoying it again.  The past two days we really began to see that happen.

Perhaps the best part of the last couple months is seeing her relationship with her siblings grow stronger and stronger. 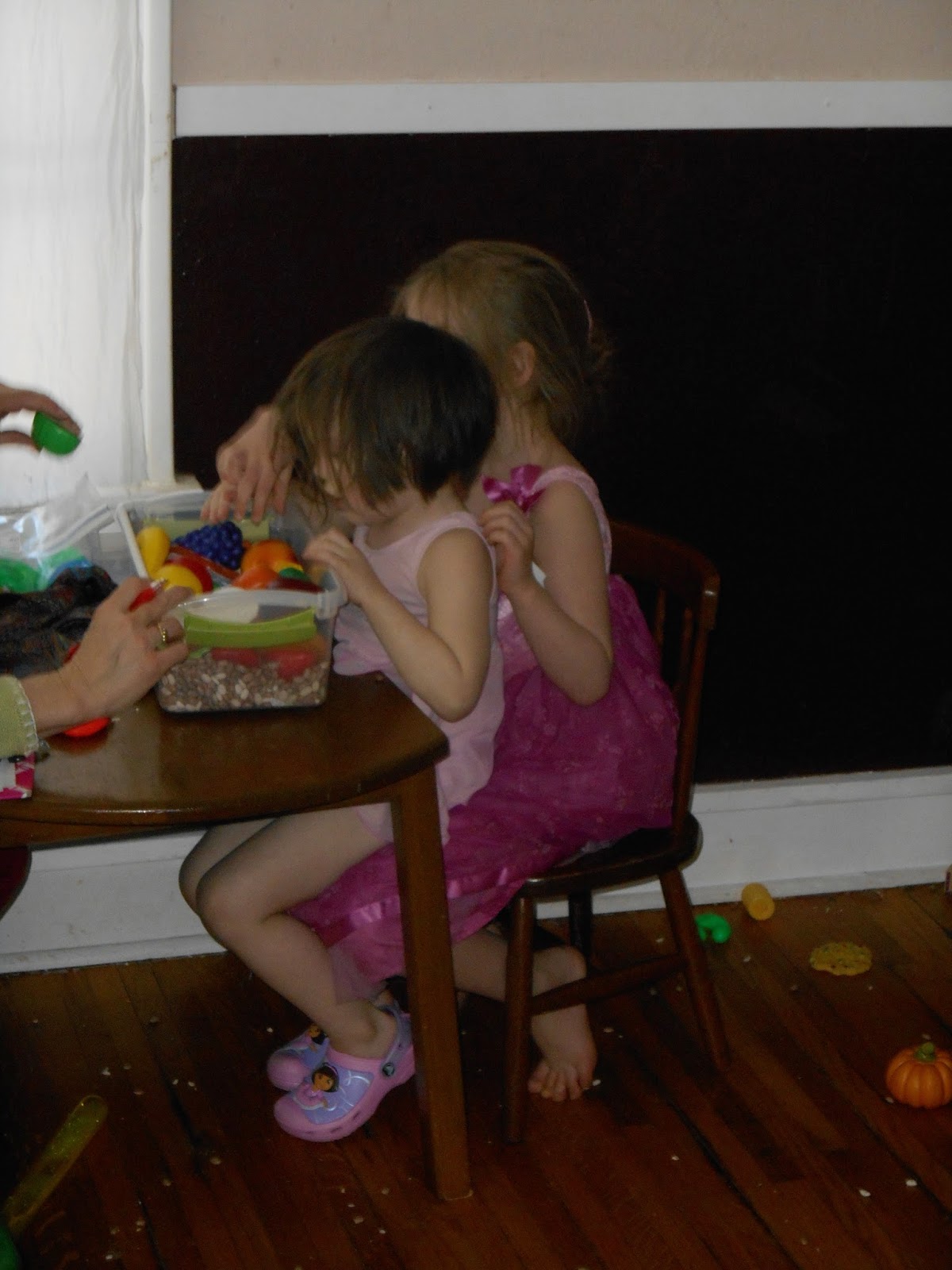 In the middle of the night earlier this week I heard Maggie wake up and get out of bed.  I lay listening, knowing that my getting up would only do what it always does, that is, make her incredibly hyper and ready to play.  Then I heard Sadie's little voice singing a song from the Little Mermaid and my heart just about burst.

Then there was the moment in therapy after Sadie had finished her school work when Mae's therapist told her she could ask Mae if she could play with her too.  Without missing a beat Mae glanced at Sadie and then sat down on her lap while they continued to play with the toy food together.  A short while later Maggie was sitting on the floor playing with a Mr. Potato Head.  As she put in his ears she studied him and said "mu-eeeehh, mu-eeeeh, mu-eeeeh."

"Do you know what she's saying?" Mae's therapist asked.  I shook my head and then we both heard Sadie say "monkey," softly to herself.  "Do you know what Maggie is saying, Sadie," she asked.

"Monkey, she's saying monkey."  And sure enough the word suddenly seemed clear as Mae repeated it softly to herself over and over again and she played.

From start to finish today was a good day.  Here's hoping for many more like it to come.
Posted by Cammie Diane at 10:48 PM