Why We Announce our Pregnancies Early

A couple years ago I was asked why we announce our pregnancies so early.  The person suggested I wait until after 12 weeks when the "danger had passed."  At the time I rolled my eyes because we lost Christian at 14 weeks, so no, that wouldn't have helped.  But it's really more than that.

We announce our pregnancies early for a number of reasons.  Maybe the biggest is that I'm not very good at keeping really good news to myself.  I'm horrible at not telling Paul about the really cool thing I found for his birthday or Christmas.  And it's a thousand times harder for me to keep a baby a secret.

That's not the only reason though.

At the same time I feel like the people that may potentially help me through a loss should be able to share in the joy of the announcement when the news is good.  If you might be reading sadness in the future, than I definitely want the share the happiness with you that we're feeling right now.

And for us, that fits our strategy with the kids.  Sadie talks about Christian now and then, sweetly.  She looks at the little 12 week ultrasound picture that we have up on the wall with the other pictures of herself and her brothers and her sisters and talks about him.  Not every day, or every week, and not sadly, because our hope is in God to see him again someday.

Still, there's another reason that we would never be able to keep this secret from our kids... or from anyone who knows us in real life.  I live in a house of little bump watchers.  Sadie is perpetually on the lookout.  And she's not the only one (or at least not the only one to notice!).

We told the people we know in real life at about 5 weeks.  Yesterday one of Mae's therapists and I were sitting on the floor talking about how quickly each subsequent pregnancy shows and she said she'd suspected I was pregnant before we made the announcement.  So to say that I show early is really, really accurate.  To give an example of how early I now show took a few pictures. 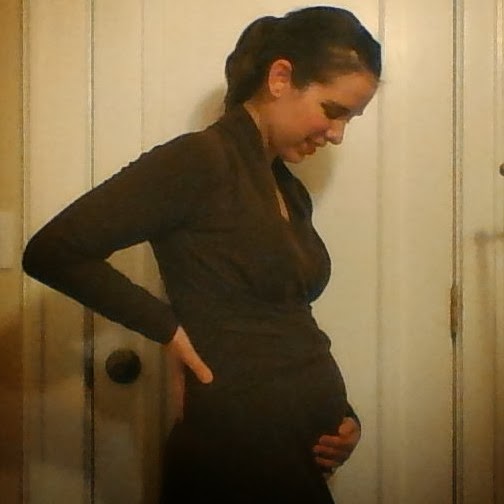 Yeah. I know.  My first time around that would have been 20 weeks.  These days my muscles sense the pregnancy hormones and call it a day.

And lest you think that was how I started out here's a progression from the week we found out to now (because I'm totally coping an idea I saw on pinterest):

So why do we tell?  Well, for a variety of reasons I listed above, but also because this is one secret that just doesn't keep well.  By the way, I've had men rushing over to help me lift cat litter into shopping carts in two different stores and acting very concerned that I'm even trying to do something like that, so I would say that I am obviously showing at this point (and that people in Michigan are so helpful about helping with things like that!  I'm amazed!  I shouldn't be but I am!).

And those are the various reasons we tell pretty much as soon as we find out!  It's just what's right for us!
Posted by Cammie Diane at 8:51 AM