We survived yesterday.  It was roots.  Again.  A plumber came and drilled out the roots.  It's been 10 months since they last did it and it seems like it's going to be a yearly problem.  With the way the sidewalks are buckled all up and down our street I guess this is hardly surprising.  Paul said it has something to do with the house being old and the joints in the pipes being made of clay.

My goal is to not be here the next time it happens.  In the state, yes.  In this house with it's many times a year flooding, no.

It makes sense.  Our lease is up right after Paul takes the bar.  I'll be just starting the third trimester.  It'll be right on schedule.  Our of the last five times we've moved I've been pregnant for four of them (House to apartment: pregnant.  Apartment to trailer: not.  Trailer to Florida: Pregnant.  Florida to California {I'll count the summer internship move}: pregnant.  Florida to Michigan: pregnant).  I guess in our family, pregnancy and moving just seems to go hand in hand.

Paul went to the store and returned with my requested items.  A breathing mask and new super thick plastic gloves.  A new mop that will stay down in the basement.

Last year I ended up fighting black mold as a result of the flooding.  This year I want to stop it before it starts.

My day did brighten considerably when the kids and I went upstairs so that we would be out of the way while the plumber worked.  First there was snuggling with all three kids piling on top of me.  About an hour and a half and after half an hour Sadie decided that we were hiding from pirates and that everyone needed to be very, very quiet.

Her brother and sister played along for approximately 15 seconds before the giggling began.

After that it was pretty much pandemonium. There was lots of running and giggling and jumping on the bed.  Patrick insisted on jumping on the bed with his sisters and I was amazed as I watched Maggie pay attention to him very carefully as she jumped wildly around him, never bumping into him.  She did stop twice to hug him enthusiastically.

At one point Sadie suggested that two of her dolls needed to nurse and Patrick came over, an outraged look on his face, and threw them both on the ground.  Apparently even discussing that particular subject is just too soon (although weaning has gone absolutely smoothly in every way).

After waking up at 5 am, the kids fell into bed early and slept soundly.  And when I saw Maggie on her little bare mattress (she refuses sheets, for anyone who's knew around here and wondering), I just had to take a picture or five: 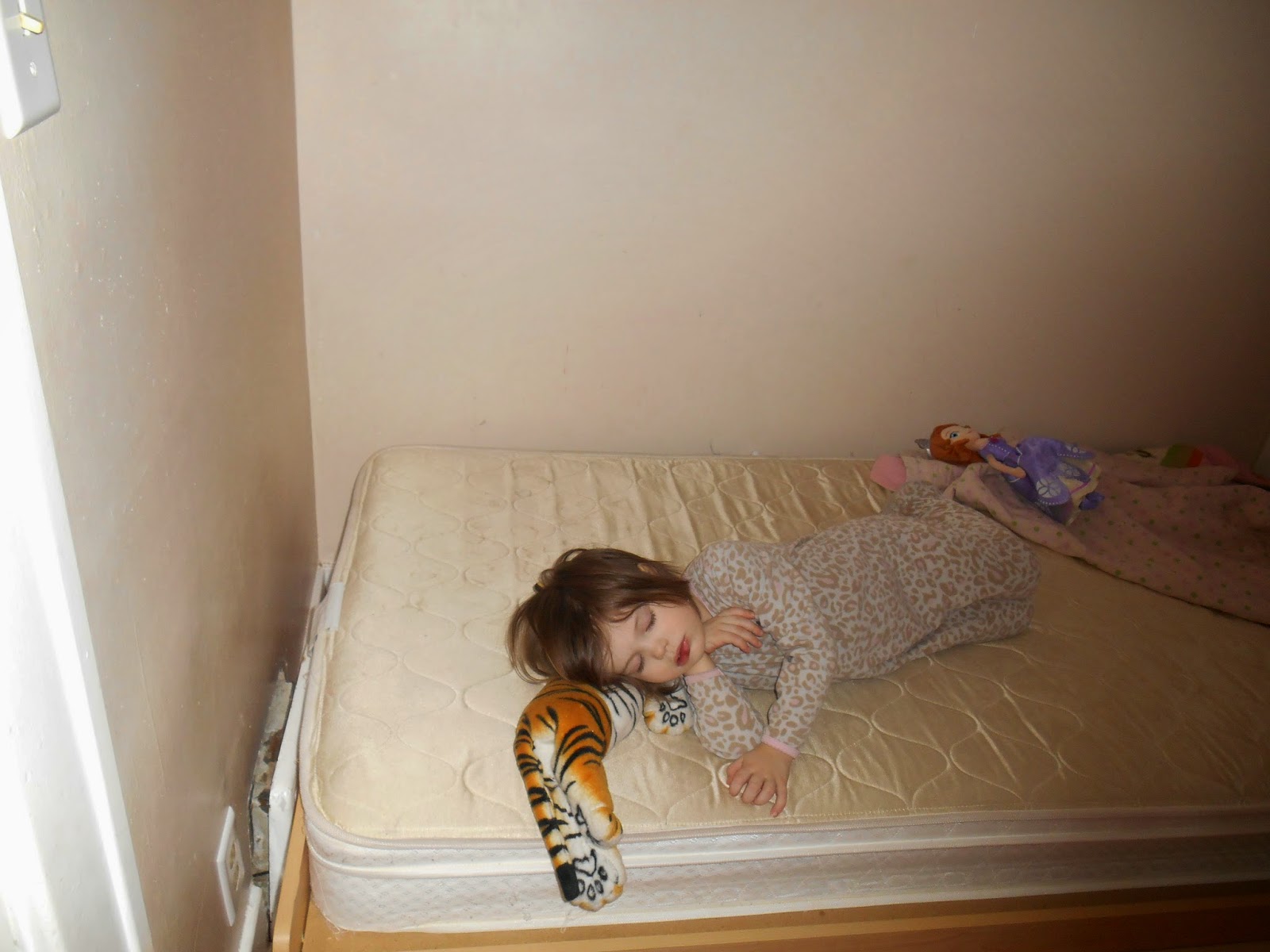 And then I tucked her in so that when she woke up her favorite babies would be there for her to play with and cuddle.

Now to get to work.  Today is the first day I don't feel like passing out or getting sick when I stand up, so hopefully that means I'll be able to get some work done!
Posted by Cammie Diane at 8:15 AM