We had quite the morning.  Patrick is kind-of-almost going along with being weaned (okay, a more accurate description of our morning would be me making every effort to distract him) and after briefly considering going to Mass separately, Paul and I agreed to brave the 11 am with all three kids in tow.

I think it was because they looked so sweet and well behaved when they were all dressed and ready to go.  Mae wore a hand me down dress from Sadie's 4th birthday, with leggings, mix matched pink socks (I couldn't get them on her feet fast enough) and shoes that were quickly to become the bane of my existence: 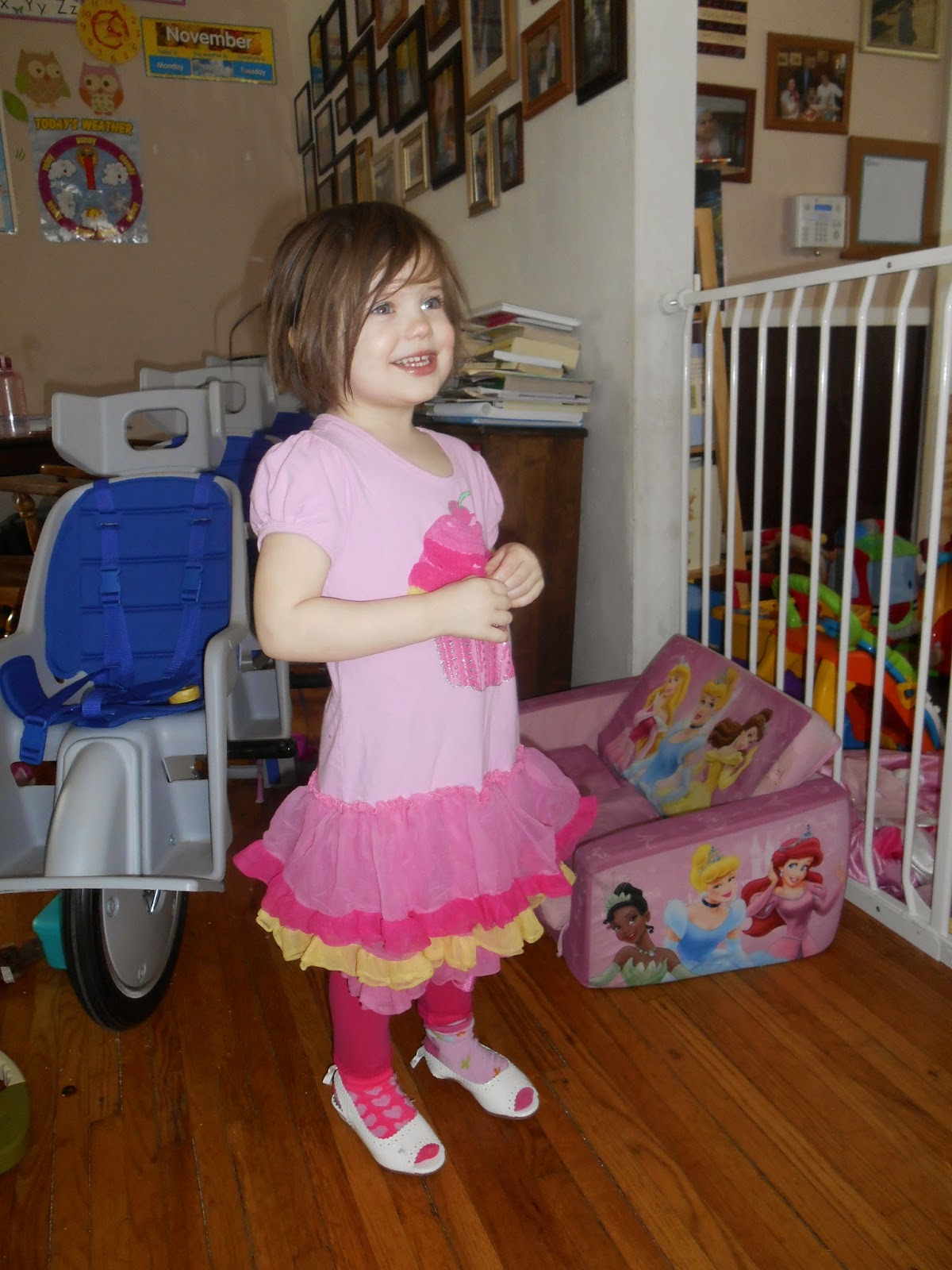 Patrick wore a monster shirt that he loves (he was going around the house roaring in it) with khakis and his police car shoes. Oh and a pair of monster socks which just added to the effect: 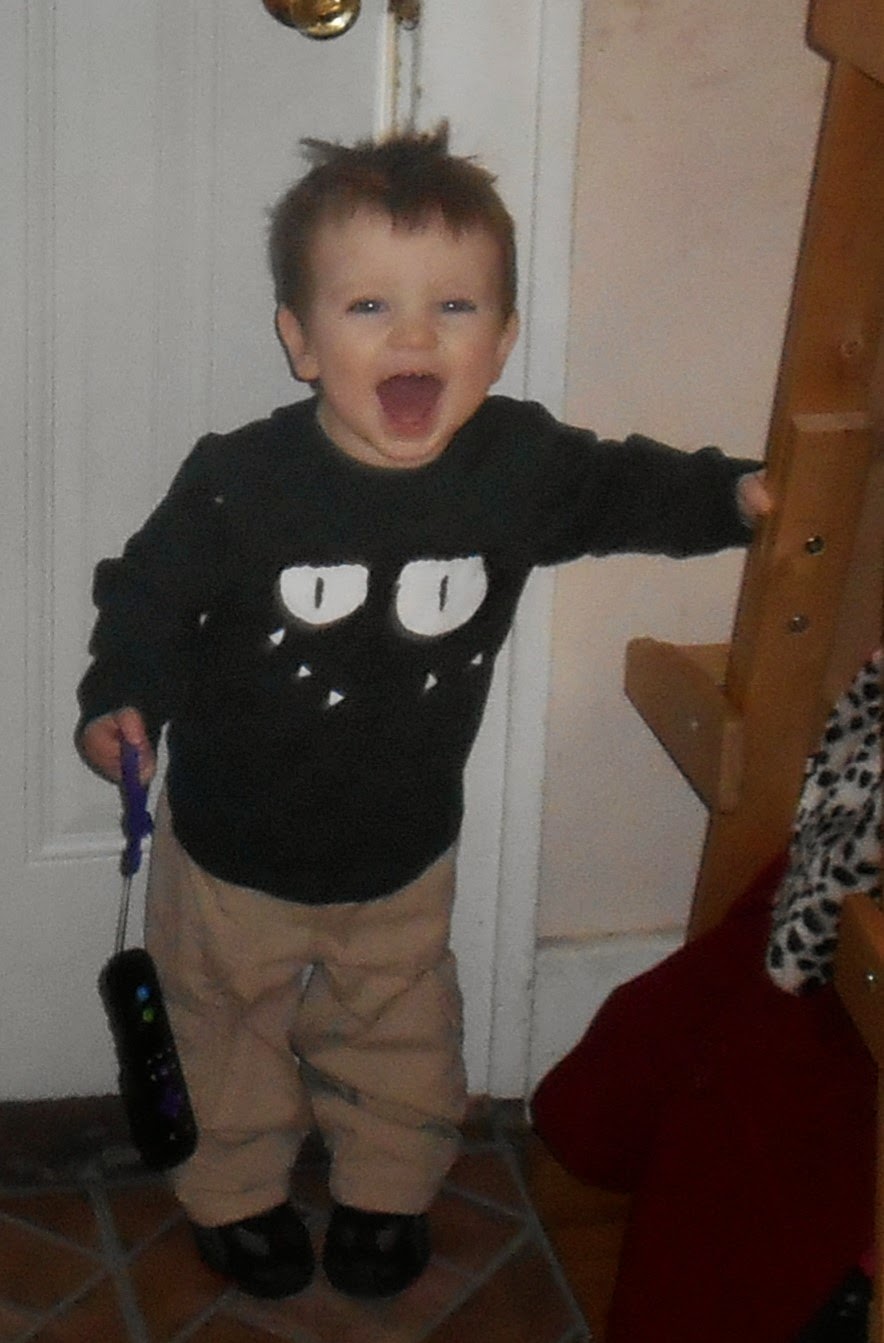 Sadie wore her "Church dress" with a sweater, tights I found on clearance at Meijer and shoes that I bought a couple years ago when I saw them marked way, way down and knew that someday Sadie would love them (and she did):

There was just so much sparkle: 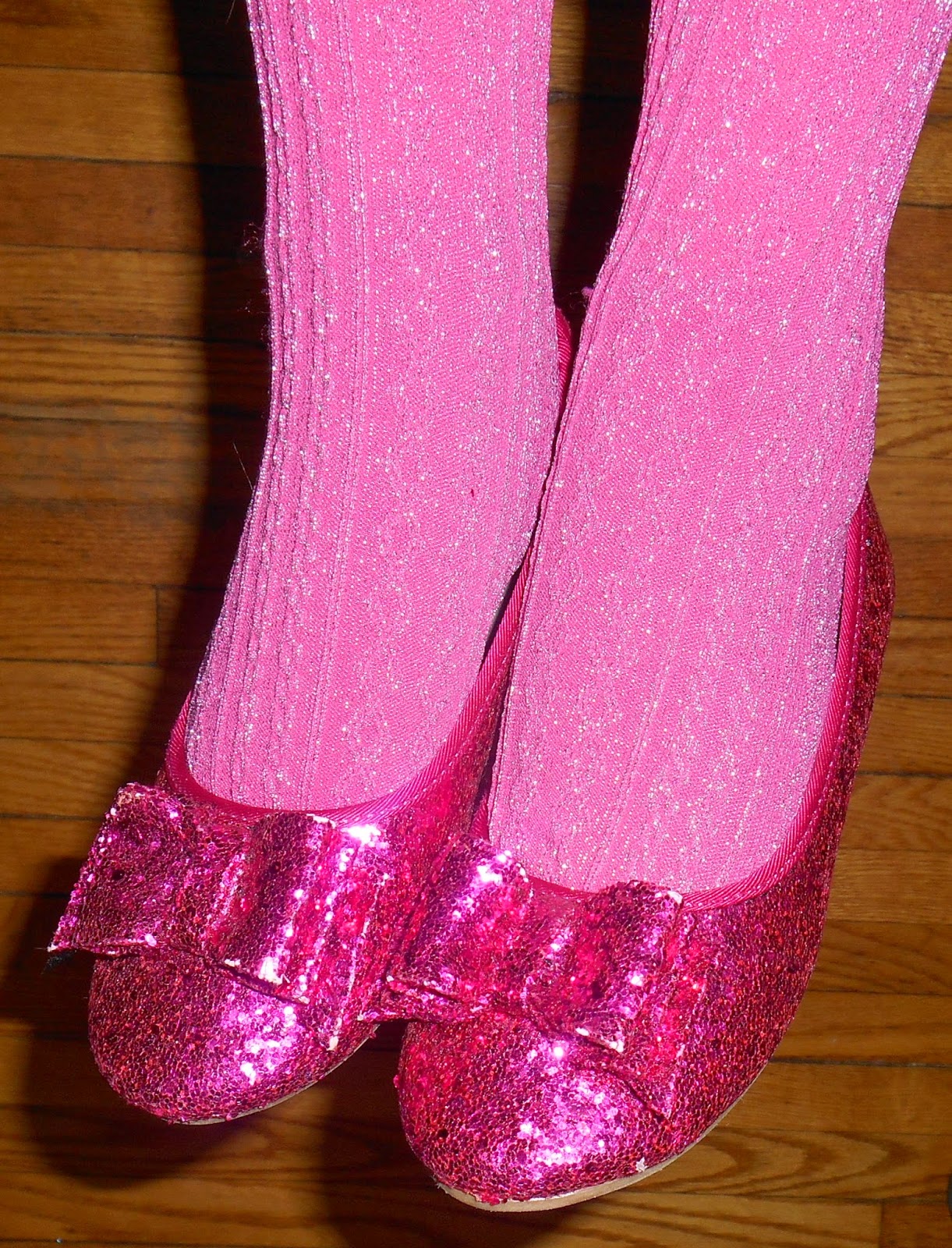 And I wore this dress because I knew that it is impossible to nurse in it, no matter how much a determined 16 month old tugs and whines: 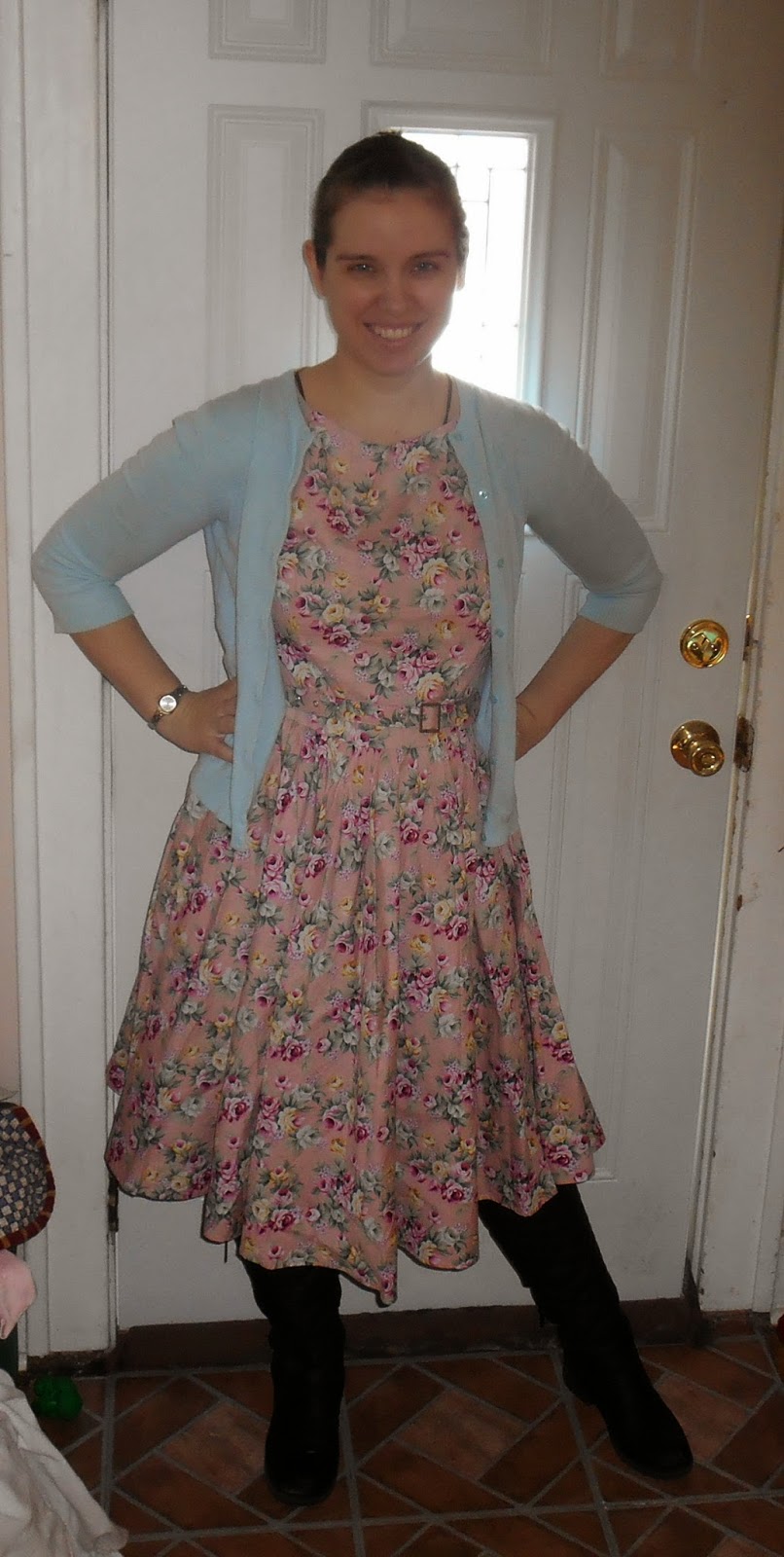 Sadie brought her favorite doll, "Bibiana" (thank you Catholic saint book name for that one), and I struggled to get a picture that showed more of Bibiana than her disheveled hair: 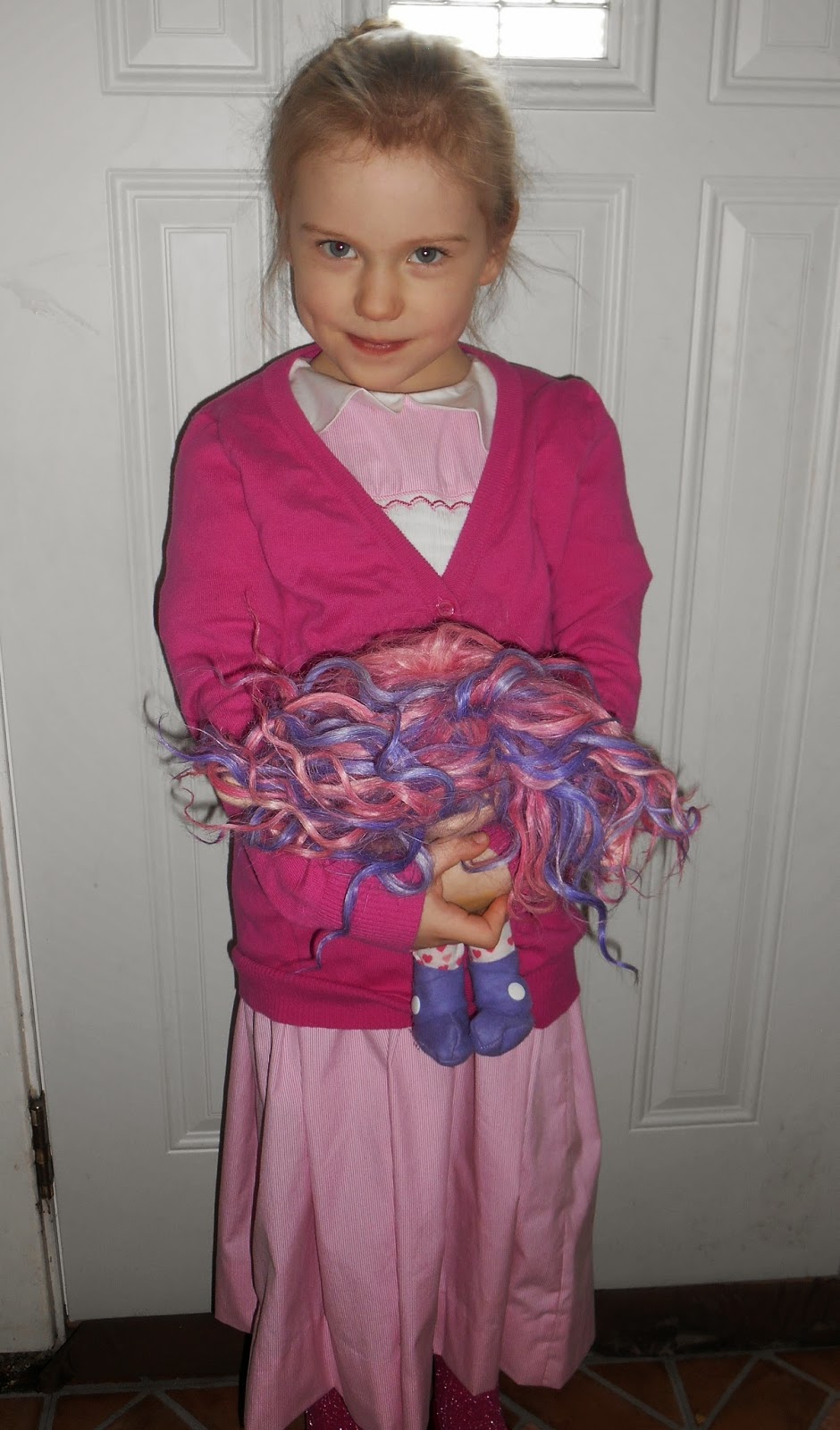 This will just have to do:

Then we walked outside where 8 degrees most definitely did feel like -8 (or whatever it finally was when we got outside) and I deeply, deeply regretted not wearing tights or leggings.  The many puddles from yesterday were impressive overflowing ice formations in the painful cold.

We arrived at Mass and went into the narthex.  Mae didn't have her binkie and I didn't want to deal with the looks I knew we'd get if she breathed too loud and so these days I don't even try going in.  I remove her quickly if she starts to make actual noise, but I'm developing a bad (hormone fueled) attitude about people who turn completely in their seats to stare and glare when she's being really good and excited and quiet and makes the tiniest of sounds and I'm trying to avoid yelling "maybe if you didn't sit in the back row or the children's section you wouldn't be so bothered by children" at anyone before Mass starts.  I realize these people are by far the minority, but they exist and I feel like I'm a) avoiding a near occasion of sin and b) trying to keep from having a blood vessel explode in my brain from my almost physical reaction to the rudeness and c) I really nearly told someone off before Mass even started on Ash Wednesday so it's a very real issue... so...

We sat on the stairs and she kissed me about fifty times, hugged her sister repeatedly, referred to Sadie as "Baby," sang an entire round of "head, and shoulders, knees and toes" complete with gestures during the offertory hymn,  and in my favorite Mae memory from today's Mass pointed up at the sky three times at the end of the Our Father before raising her hands dramatically into the Orans position and then collapsing in giggles at her own silliness as I watched with my mouth ajar at her antics (I may fondly begin referring to her as "my little charismatic."

Yes, I'm quite sure my narthex days are just beginning and that for all my reluctance about starting out there, it's likely the best place for us.  Besides, these days she's so excited to be at Mass it's hard to imagine not taking her. 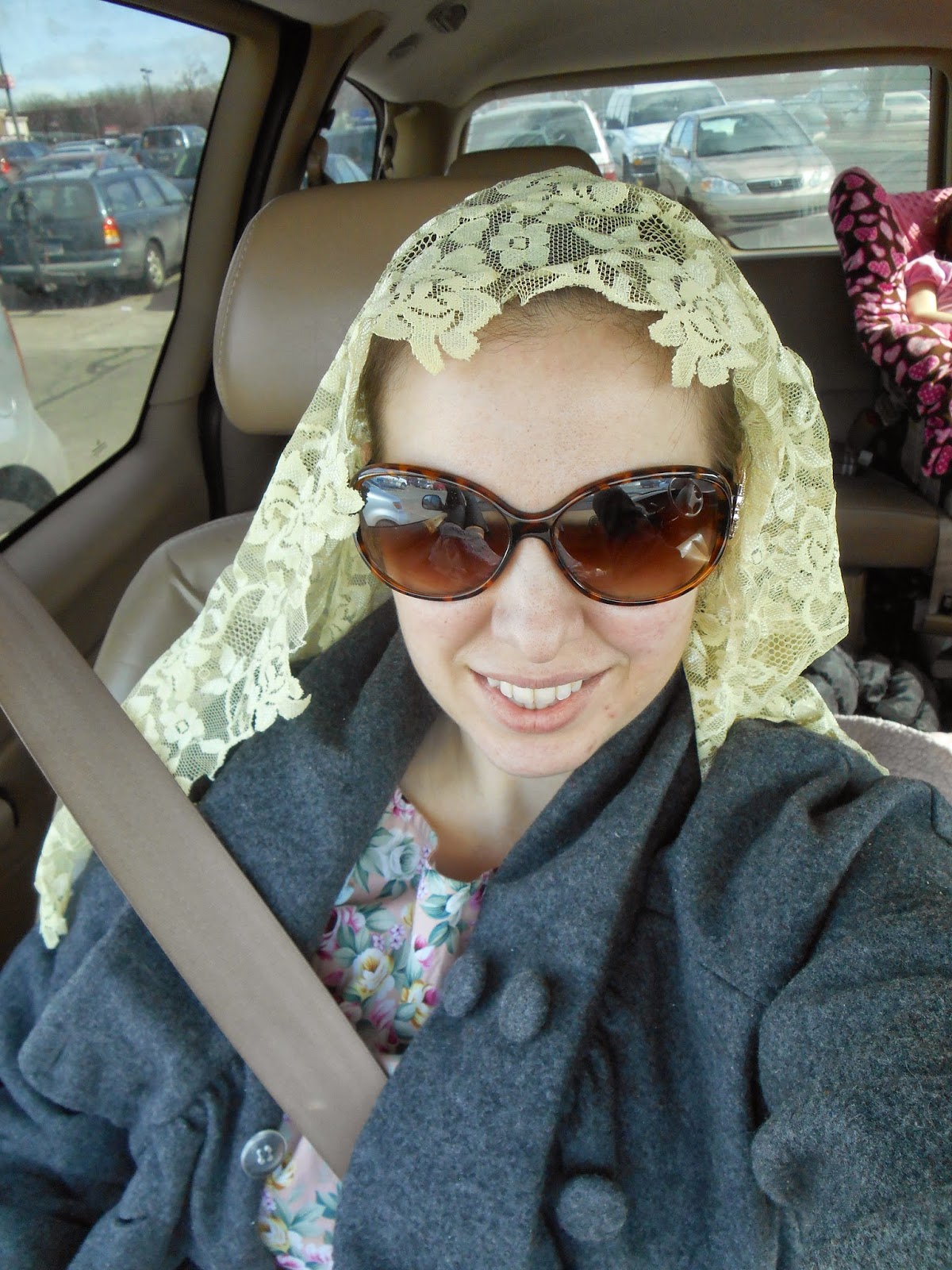 Except when it isn't.  Like when you're the last person in line going up to receive and she loses her shoe and has to collapse on the ground instantly (and dramatically) to retrieve it because she needs it on RIGHT THAT SECOND (or the tears will start... time is of the essence) and you stop and get it back on her and receive only to have her lose the shoe (which until then had stayed on quite well) a second time right in front of the entire church (resulting in me trying to pick her up, realizing that wasn't working, getting it back on her, having Paul walk into me since he was carrying Patch and didn't see me bending over) and finally getting her with both shoes on, down the aisle and back out into the narthex.

Mass is always interesting with our little group, that's for sure.

In fact, I was going to write something about something I thought about for a solid 15 seconds during the gospel reading that now completely escapes me because well... Mass with my three pretty much drives out other thoughts at the moment. 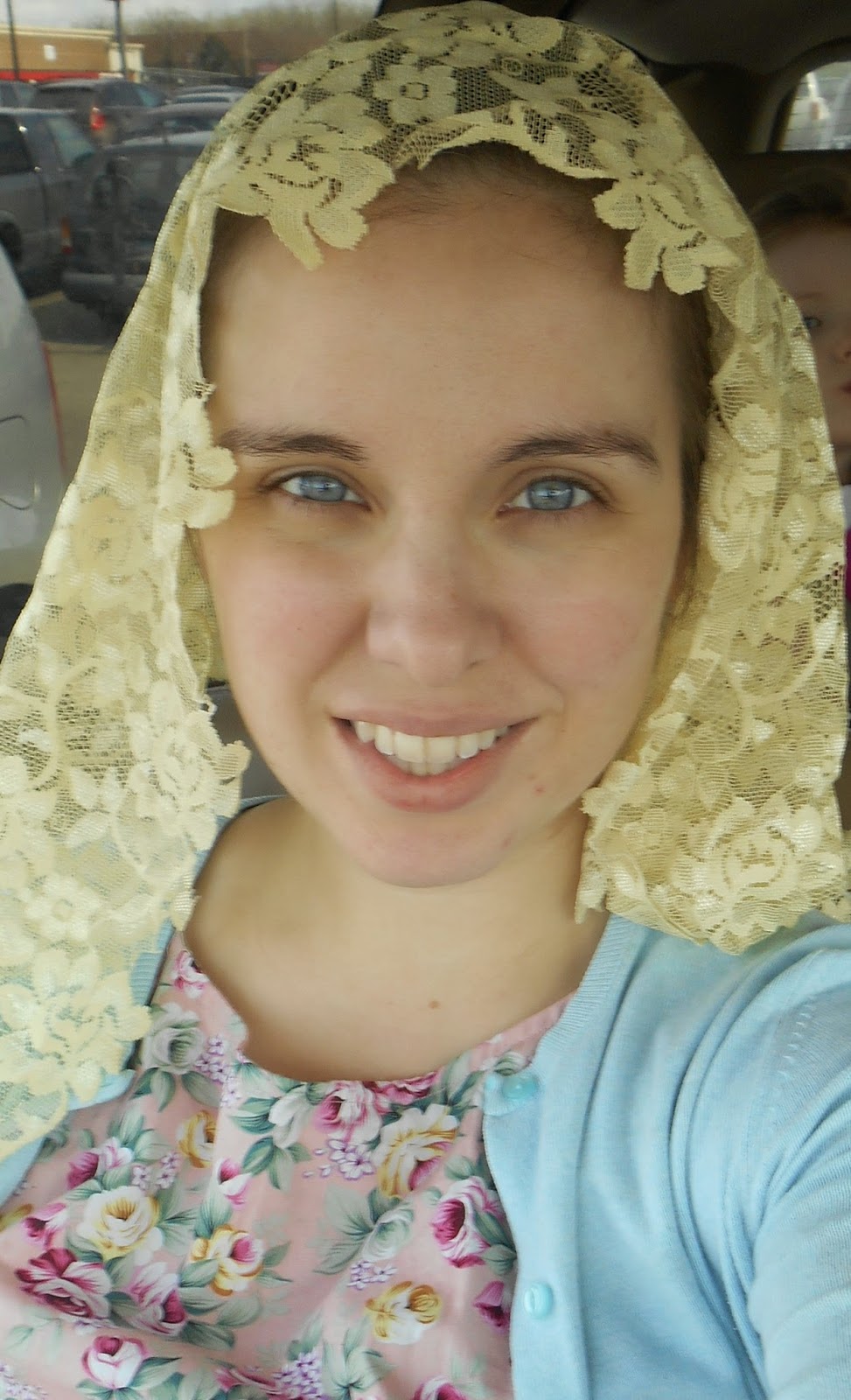 But we made it.  And at lunch we celebrated Patrick being a "big boy" now.

Now I have to go.  Because the words "Mommy!  Patch just hit me in the ear with a block!" were just called into the kitchen.  And we all know what kind of a disaster that is.

For more WIWS head over to FLAP!
Posted by Cammie Diane at 3:22 PM