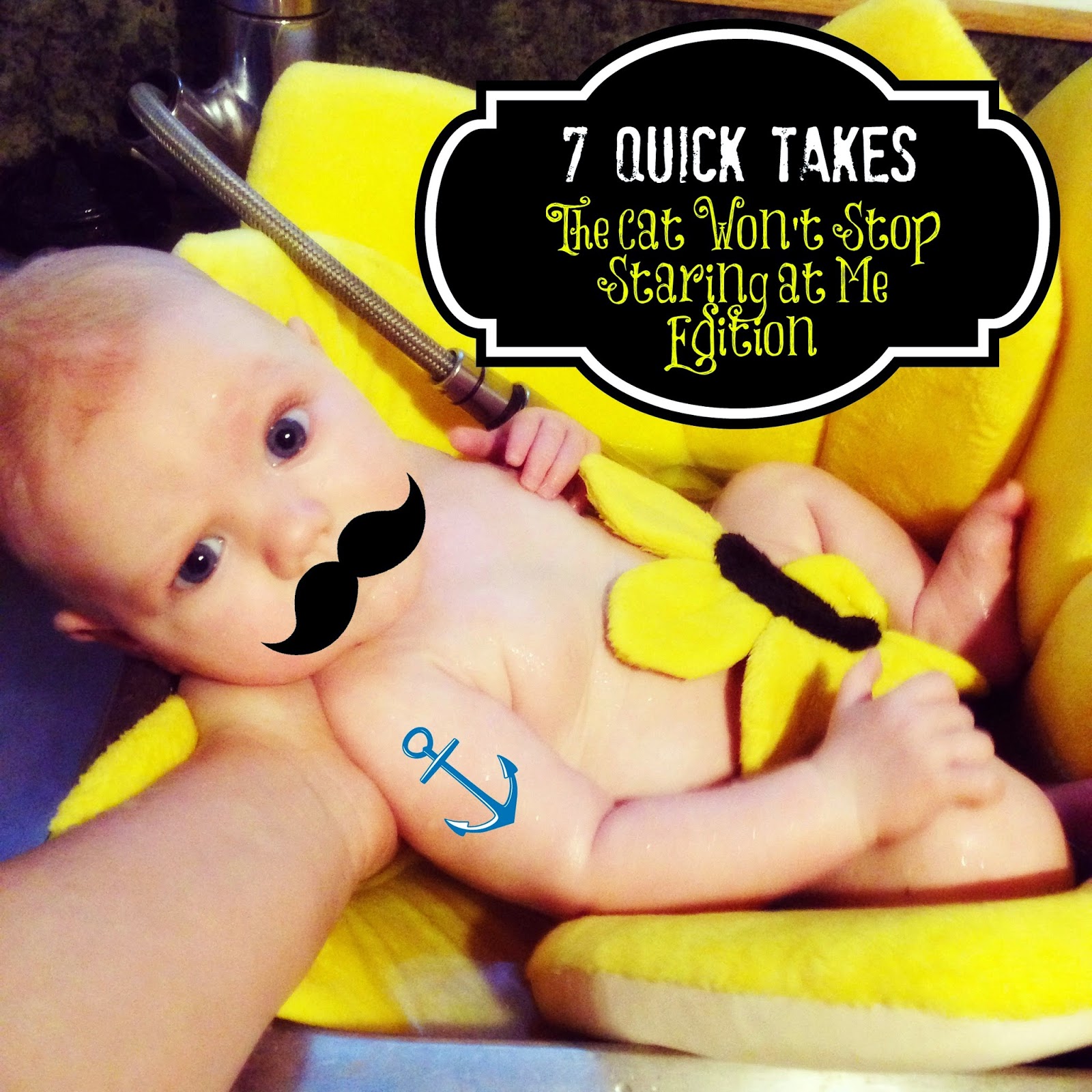 So I'm sitting here with Kittyfish, who I'm beginning to suspect is trying to be creepy in a way only a cat can, by following me everywhere, invading my personal space (not in a cuddly way, which would be okay, but in a here let me get really close and stare at your face, sort of way) and staring at me with his little unblinking yellow eyes.

I've already gotten up to go check on the baby, and I've been upstairs to check on Patch too, and all seems to be well in the Wollner house, except that apparently we have a cat who has suddenly gone from spending all his time hunting mice in the basement to following me around being weird (and over the course of my lifetime I've had somewhere around 14 cats... so this isn't just a "she's not used to cats" sort of thing).

Or maybe he's just trying to tell me with those staring yellow eyes that he just took out the last of the five hundred mice that lived here when we got him a year ago and that I never have to worry about anyone scurrying by in the kitchen ever again.

He really has done an amazing job.  I haven't seen a mouse run by in months.  And since I was literally tripping over them last year at this time, despite many different types of traps, that is a huge, huge improvement.

I guess in light of his mousing abilities I can overlook the weirdness of tonight (like I wasn't going to anyways, even if he was a totally useless mouser)... although I think I'll go check on James one more time. 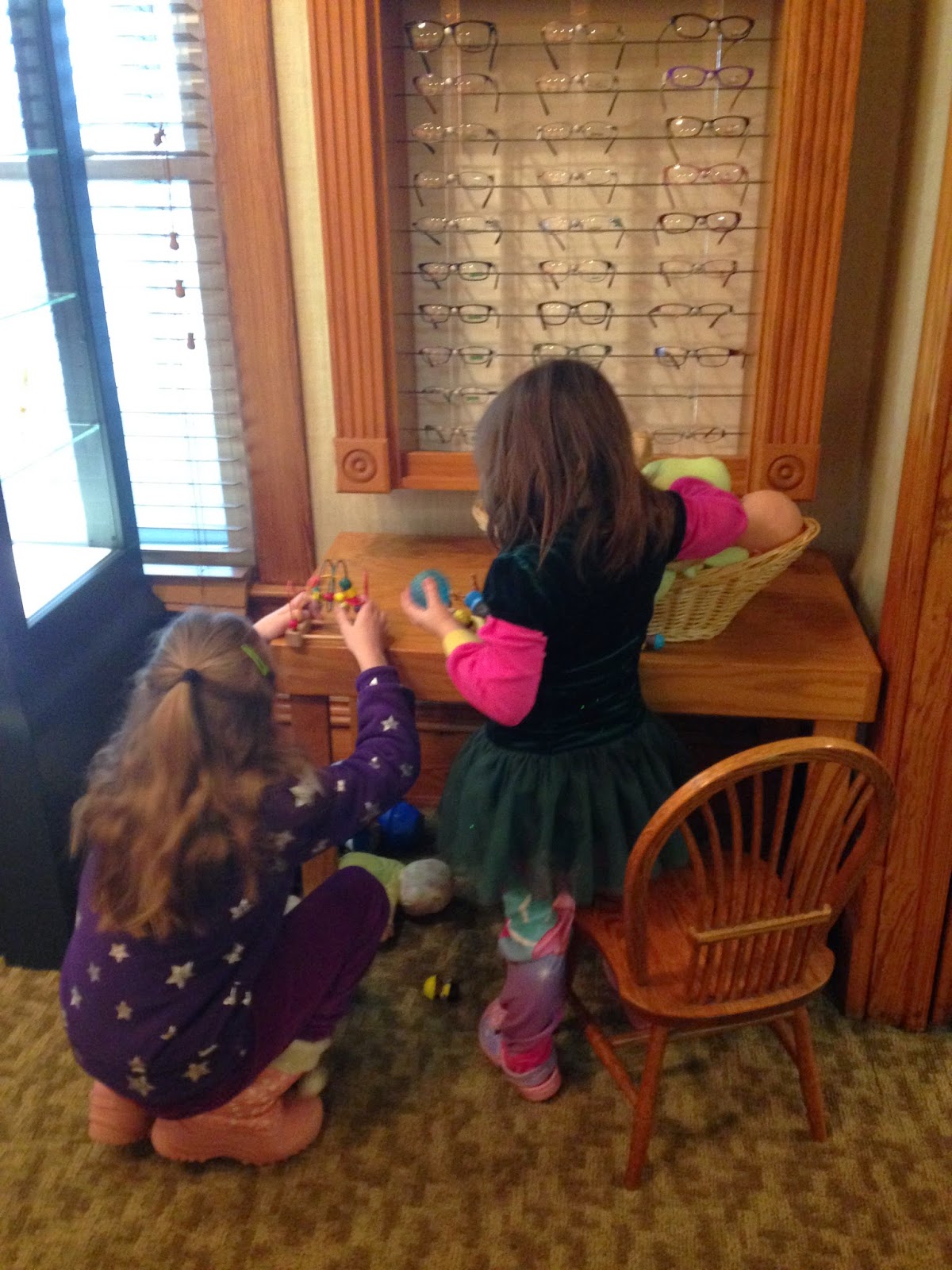 I took the girls to their first eye appointment yesterday.
It wasn't the easiest of appointments although the doctor and office staff were great.
Originally Mae's OT was going to come with us, but she's on leave with an emergency at the moment and then we had an exceptionally icy night and all the schools and the therapy center were closed and so the therapist from the ABA center who was going to meet us there had been told not to go out on the roads... so it was just me and the girls.
At least James and Patch were home with Daddy!
As a result of the trip I now have a lovely mouth shaped bruise on my arm, but we all survived and made it home in one piece.
And the doctor was actually able to look at Mae's eyes (that fact is a testament to how good he is with kids) and he said structurally everything looks good, so if there's a problem (like seeing rainbows around lights) it's a sensory problem and not a structural problem.

So, I've been planning on making a mermaid tail tutorial... if I can ever stay awake at night long enough to actually sew something and photograph it.
The fun that Patch had today, however, should give me the boost I need to start planning a new mermaid (make the Bubble Guppy) tail.  Because he was zooming around wearing this, all afternoon:

We're finding that cooking provides awesome practice for many of the skills that Sadie's been practicing at OT.  And because she' so interested in cooking she's even more motivated to work on those skills than she is when she's actually at the OT office: 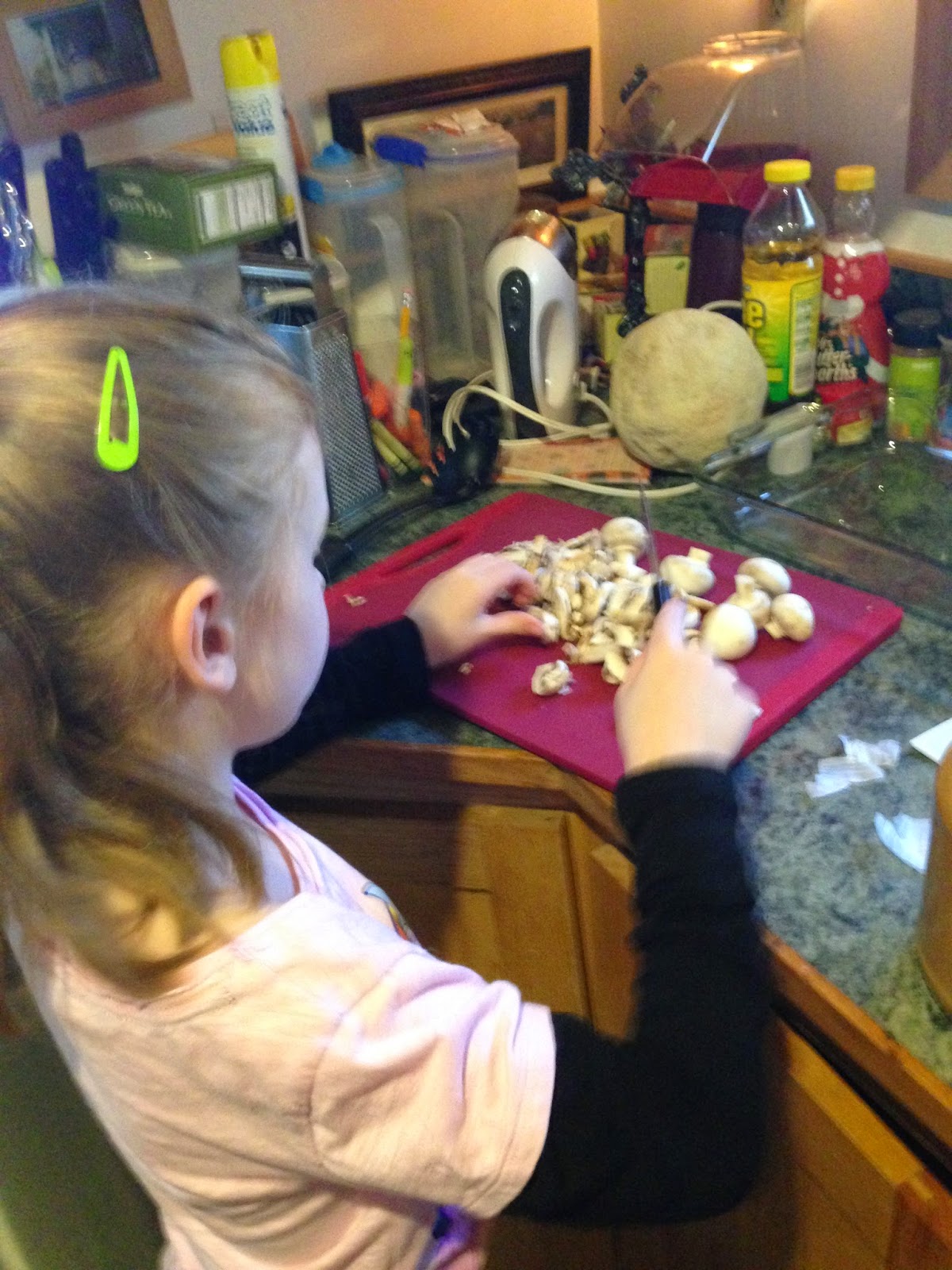 Patch wasn't the only mer-person in the house today.  And in case you'd ever wondered how much trouble Maggie could get into in a mermaid tail... well this is a perfect example of just how capable she is of moving around in it. I managed to snap this while telling her to get down.  She actually was listening to what I'd said from across the room and was getting down (moments earlier she was actually climbing on the gate, which gave me a chance to take this picture!): 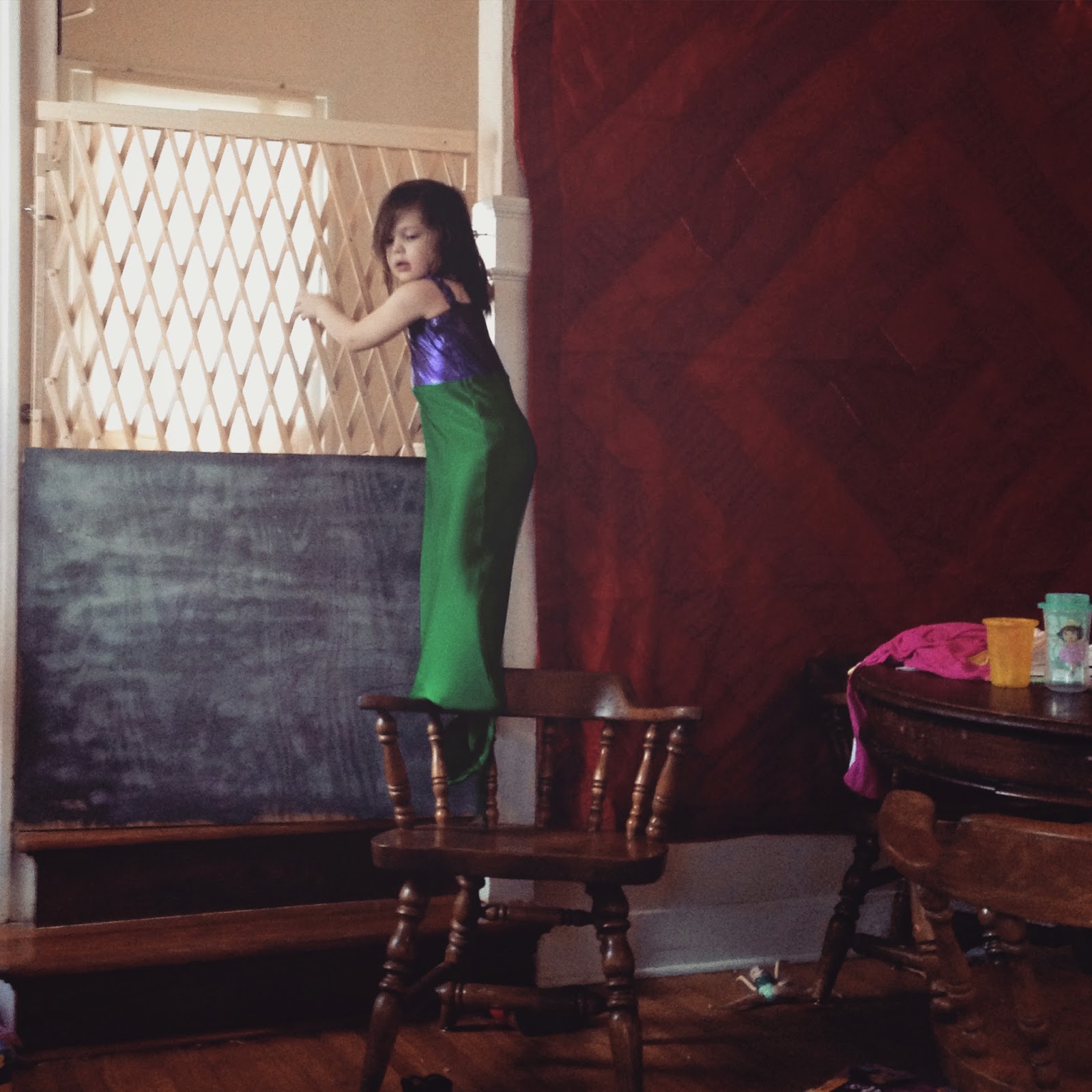 Not to be outdone Sadie got dressed up in her mermaid finery to rest on the couch.  And to zoom around the house and jump on the trampoline.  ﻿ 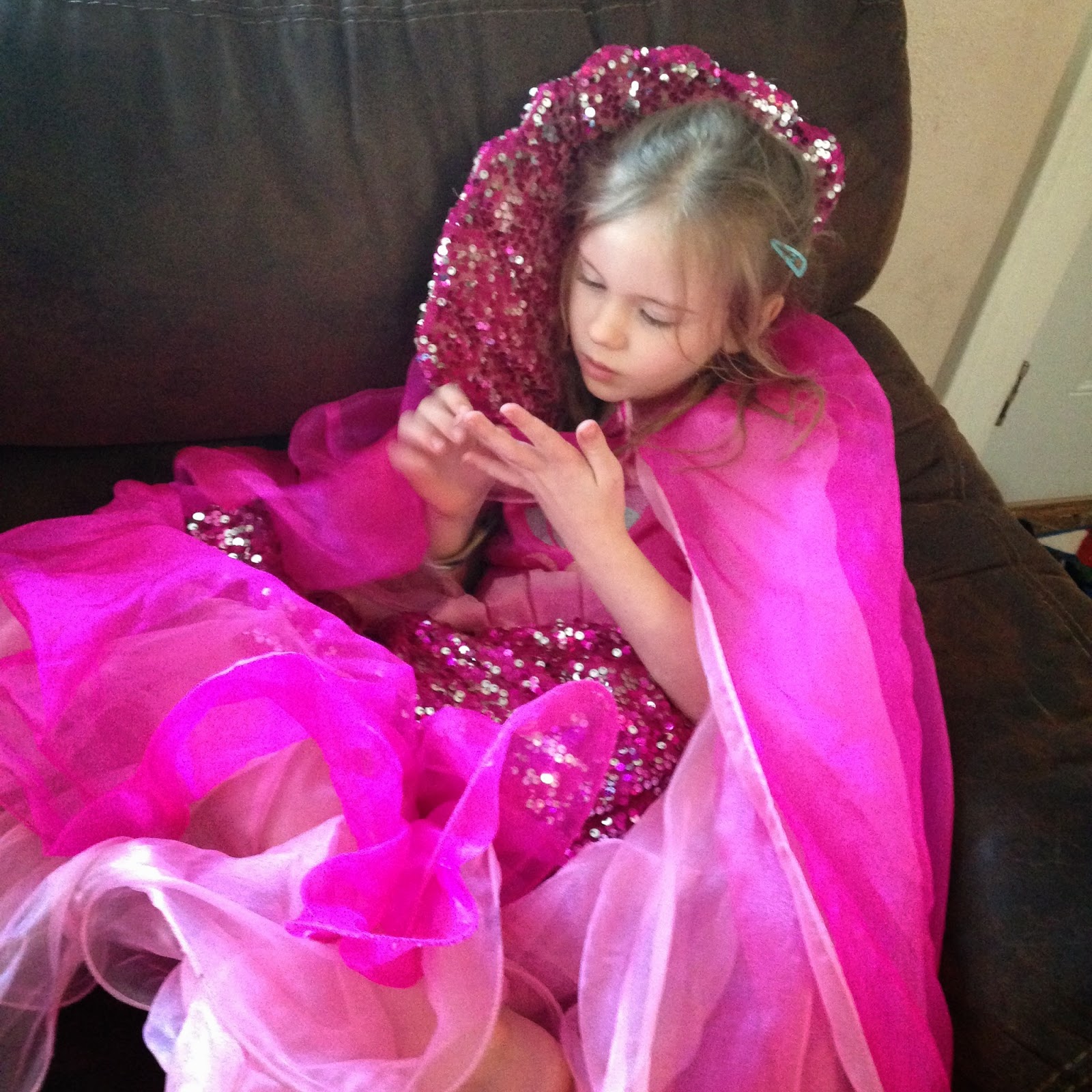 This is a major, major victory.  After screaming over going anywhere near the bathroom because she was terrified of just about every thing in the bathroom, someone has decided that they love baths again... and that she wants to take a long bath, where she talks about being a mermaid the entire time, at least once a day.
Since taking baths in the sink wasn't going to be an option for much longer as she's getting taller and taller, I'm thrilled with this development.  Besides, it's also a great opportunity for sensory play!

I'm considering adding a new goal to my New Year's Resolution of "get in shape" for the year.
I want to actually run the entire 5K for the Autism Acceptance race in our area this year, instead of coming in almost last place like we did last year (we did beat a few senior citizens... but only because they stopped to look at two deer in the forest... if they hadn't stopped they totally would have crossed the finish line before we did).
That means I have until May to get into 5K shape, which I think is a reasonable time frame.

Now I just need to motivate myself to go work out when my phone is telling me it "feels like -4" outside!
For more Quick Takes head over to This Ain't the Lyceum!
Posted by Cammie Diane at 10:11 PM