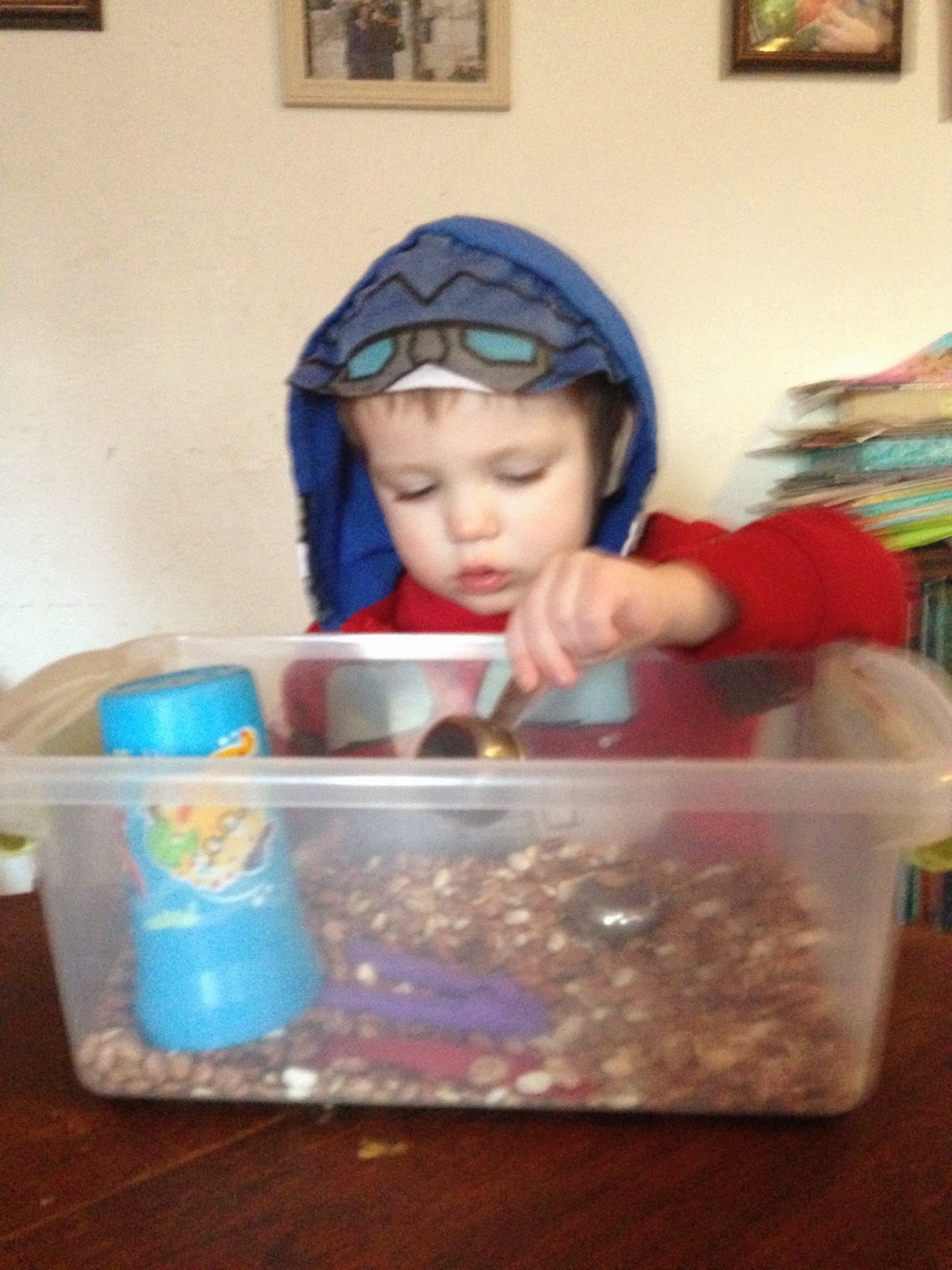 It can be tough to be logical (read: not overly panicked) at 11 pm after spending a couple hours up with a sick toddler who has a rash on the back of his neck.

We've already done two rounds of the flu and I managed not to think of anything more than getting through each day during that rather unpleasant time.

But last night when I heard Patch whimpering and found him shaking and snuffy, laying on the floor next to his bedroom door I was slightly more concerned.  His cheeks were splotchy and pink and of course the rash I'd noticed on his neck at bedtime (and had thought was strange, since he has places where I battle eczema, and that's not usually one of them) immediately came to mind.
Now after even just a few years of doing this whole mom thing, you would think that I'd have learned that late night Googling while holding a sick baby is not a good idea.  There will always be those far out unlikely horror stories, and those horror stories will all, of course crowd to the front of the google rankings, ready to assure you that whatever it is, it's horrible.

Late Night Google when baby is sick is not your friend.

But the temptation was too great and I googled and of course, what comes up when you go looking for possible answers for a rash on the neck and a snuffly nose?

I thought of the headline I'd seen the other day about measles coming to Michigan and sighed. 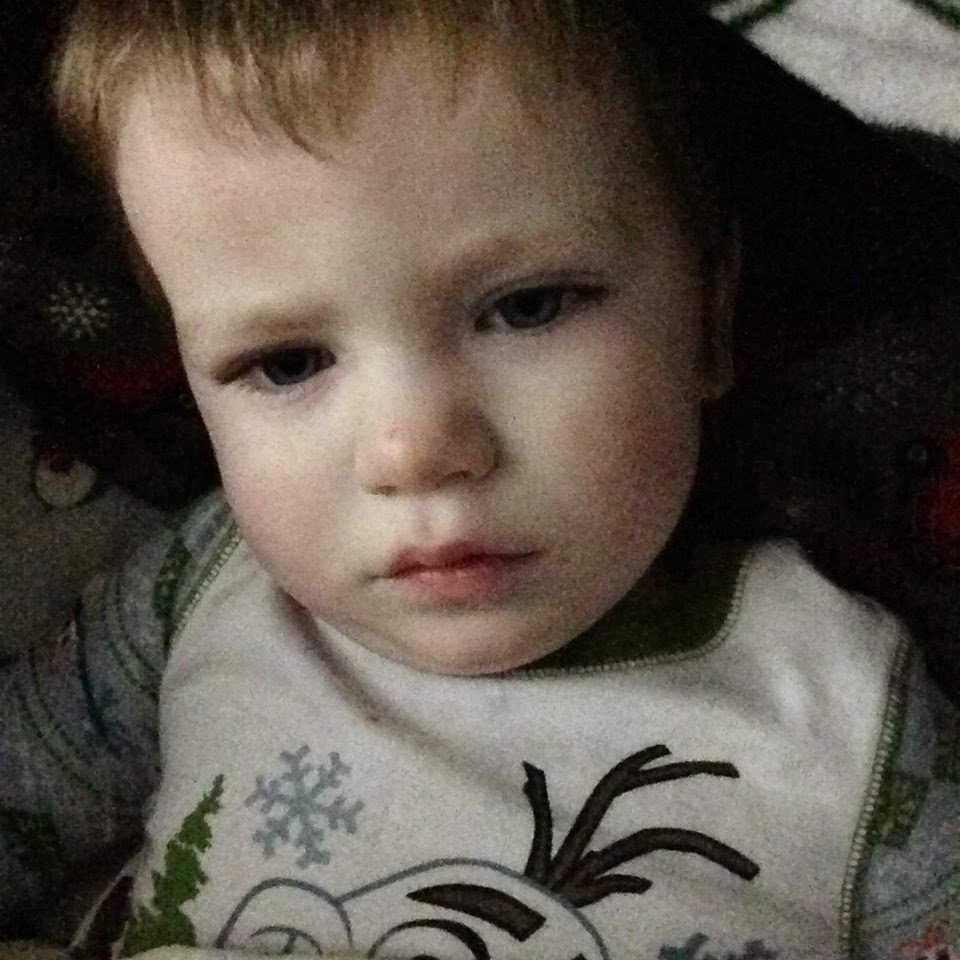 He's had his shots.  His MMR shot was actually at a year and a half after the refrigerator in his doctor's office stopped working right before his first birthday and they lost all of their vaccines right before his appointment and they said they'd call to make another appointment but no one ever did and, since this was right around the time of Mae's diagnosis, the vaccine was lost in the shuffle until his appointment at eighteen months.  But he's had it.

Still, I found myself fretting as he shivered and crawled under the covers in the big bed and wrapped my necklace around his hand over and over again.

We've hardly left the house in weeks.  It's been so cold and with the flu going round and round we've been pretty cooped up.  Except for therapy appointments.  A picture of the waiting room for Sadie's OT popped into my head. Of course her OT shares a waiting room with the University's other specialty doctors and of course alongside pediatric hematology and oncology is infectious disease.  I'm sure there are many precautions against sicknesses being spread, the logical part of my brain reminded the worrying part, but still I fretted.

This is what happens when you have an over active imagination and a sick baby and too much time to think in the middle of the night.

Then Patchy brought me back to the present by yanking on the necklace a bit too hard.  And rolling over.  And rolling back over.  If I'd done a real time post of what those hours looked like it would have been something like this:

9:07 pm- Patch comes over into the big bed, shivering and sick.  I say a silent prayer to thank God that James is actually asleep in his bassinet.  I climb in and wrap our big boy in blankets and kiss his forehead.
9:11 pm- James wakes up.  He seems to have some sort of internal alarm that lets him know when his brother needs my attention that rouses him to need something at exactly the same time.
9:12 pm- Apparently what he needs is a diaper.
9:13 pm- While I change James, Patch frowns and pulls the covers up to his chin.  He smiles when James returns to his bassinet.
9:15 pm- I pop the binkie into James' mouth for the fifth time while holding Patch with my left arm and rocking him.
9:21 pm- I get up and nurse James.  Patch jumps up and crawls across the bed, gets down, closes the bedroom door, and gets back into bed.  He may be attempting to prevent any more people (sisters) from coming into the room.
9:26 pm- James is fed and burped and returns to his bassinet.  Sometimes oversupply is a good thing, like when it means that a baby can have a full stomach in two minutes.
9:34 pm- Kittyfish discovers the closed door.  He is furious.  He begins to yowl loudly.  Patch pulls the covers up over his head and cowers while I assure him that all is right in the world and that the kitty won't bother him.
9:36 pm- Kittyfish apparently throws himself at the door and it creaks loudly.  Patch is now wide awake.
10:38 pm- Patch is rolls over for the seventy fifth time, accidentally yanking my hair, again, and giving my necklace a good hard pull.  I get up and go over to my computer and put on a Bubble Guppies, hoping that if it takes his mind off how he's feeling, he might fall asleep watching it.
10:39 pm- Bubble Guppies begins to play.  Patch jumps up and runs across the room.
10:40 pm-  I turn Bubble Guppies off but it's too late.  Watching one and a half minutes has hyper energized him and he's now ready to play.
10:59 pm- Paul comes home and I rush downstairs and hand Patch to him while Patch cheers for Daddy, voicing the way I feel on the inside.  Paul agrees to take a shift trying to get Patchy to sleep I his own room.
Sometime around 1 am... Patchy finally falls asleep.

He seem to be feeling much better this morning... but wow, did it feel like a long night.
Posted by Cammie Diane at 10:30 AM

Email ThisBlogThis!Share to TwitterShare to FacebookShare to Pinterest
Labels: Motherhood