Ever since I was a kid I've loved making lists.  In my parents' basement there are boxes and boxes full of notebooks whose pages are filled with years and years of lists. Making lists at night was one way that I would relax.

After I made a list I would seldom glance at it again.  They weren't something to come back to, they were actually more of a way of ordering my thoughts and laying out what I had to do or wanted to do or dreamed of someday doing.

Over the course of the last four or so years I fell out of the habit of making lists.  These days when I make one it's usually in my planner and I actually make an effort to tick of the boxes one by one.  I come back to my lists now and see if they're completed.  Thing that aren't finished get rolled over to the list for the next month.

My head is too full these days to keep everything straight simply by writing it down, I need reminders of what needs to be done and when it needs to be done by or the days will slip by, one after the other, until a ridiculous number have passed and I've nearly forgotten what it is I intended to do.

When New Year rolls around, however, I just can't resist.  It's the time of year to make a list that represents my hopes and goals for the year ahead... and that is one list I can't pass up the opportunity to put on paper (and it will be going in my planner too, next to all the other things I'd like to finish as the coming months unfold).

And so here are the start of my resolutions for 2015.  Some are typical (I've got fitness goals!).  Some are weird.  Here they are: 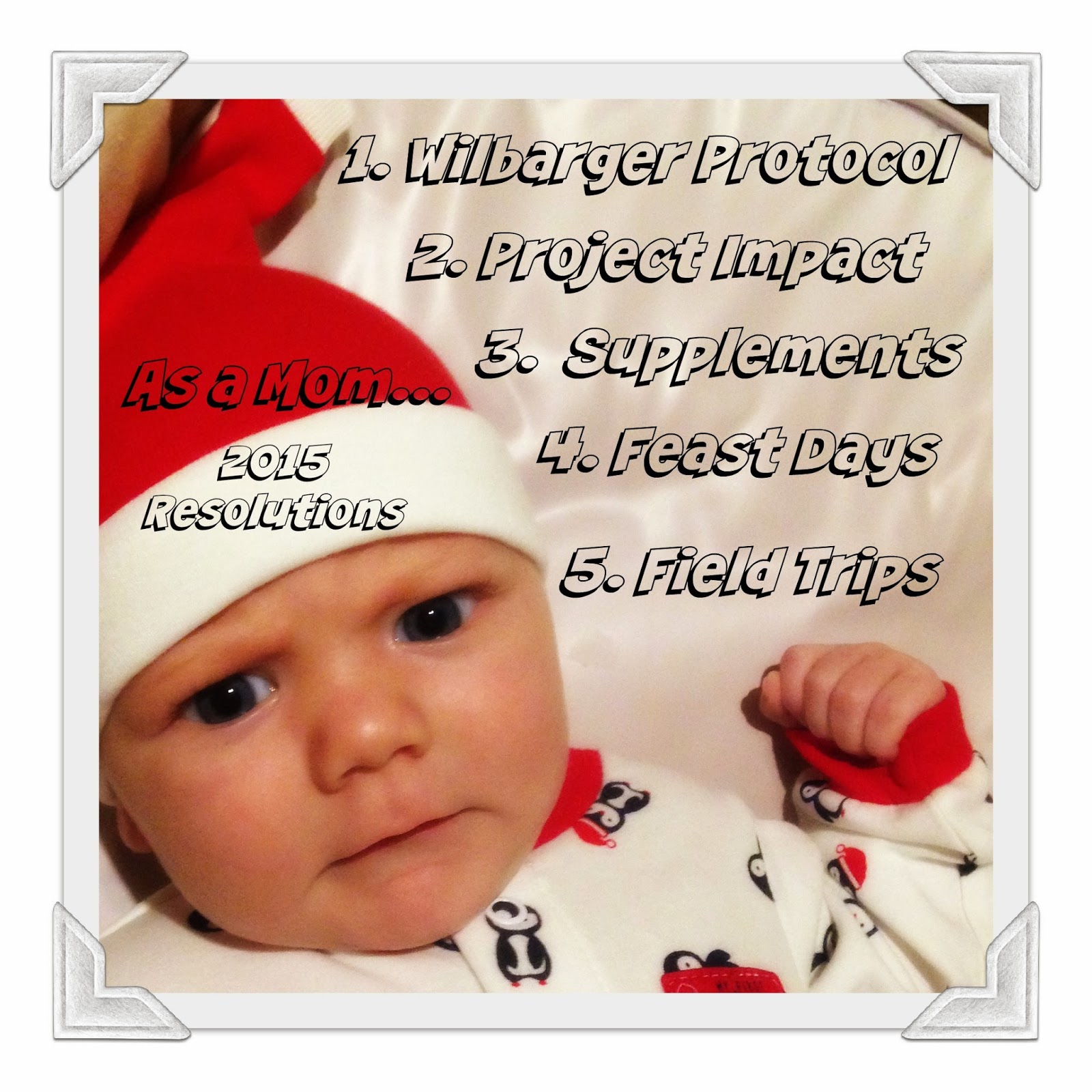 -Get into a routine so that we actually do the Wilbarger Protocol every two hours (especially with Sadie since the difference in how calm she is is huge).  Set alarms on my cell phone so we don't miss the time when it comes up.  Drop everything and do it.  It's a pain, just because it has to be done every two hours (at exactly the two hour point) but after seeing the difference between using the protocol and not using it I know it really needs to be a part of our days.

-Get back into doing Mae's half hour of one on one therapy time from the study that we did together.  Commit to at least getting some portion of that time in daily (with half an hour being the goal).

-Find new and inventive ways to get a certain four year old to actually take the supplements she needs to take.  Because she needs more nutrition than what she gets from oatmeal, potatoes, and g.f. bread with peanut butter (the three foods that are okay at the moment).

-Make more of an effort to celebrate feast days as a family again, with crafts and special treats and stories or movies.

-Start inserting more field trips back into our schedule as soon as the weather permits it. 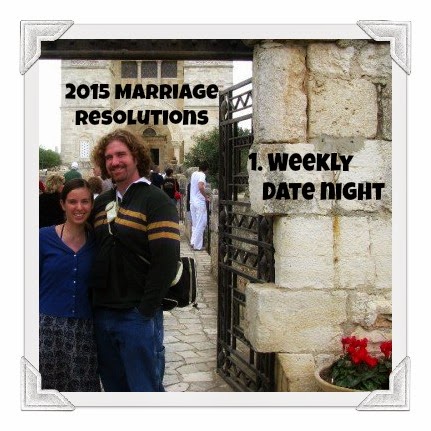 -Have one movie/date night a week (that means Netflix around here at the moment) as long as Paul's schedule permits it.

Make sure to have everything done, so that on the nights he's actually home we get to spend time together!  This is one of the best motivations to cutting back on my stores.

I didn't want to have to be sewing away on those rare nights when he isn't busy!

Okay to be totally honest being able to sleep was a big motivator too, but this will be a nice added benefit. 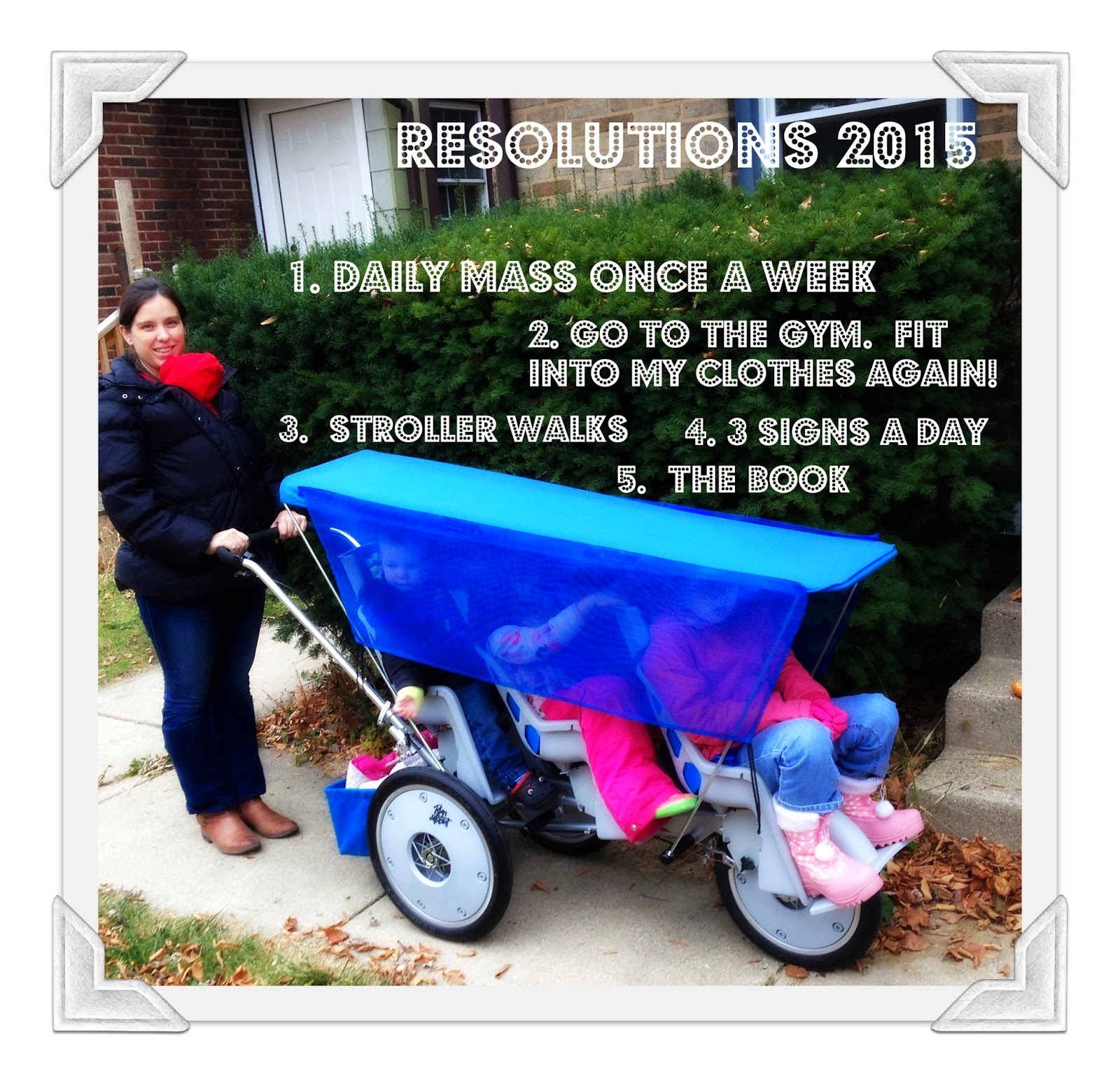 -Make it to daily Mass once a week.

-Keep going to the gym.  Try to go at least five days a week.  Preferably very early in the mornings (like before heading to the place mentioned in the previous resolution).  Start running outside when it's not frozen outside anymore.  Take Sadie with me.  Drop two sizes so that I can fit into my clothes again.... because I miss having clothes that fit...

-Start taking long walks with the stroller again one we reach that time of year when the sun isn't quite so far away.

-Learn three signs a day (ASL).  Teach them to the rest of the family.
-Start working on writing a book again.  Finish it before I'm making my 2016 resolution list.

Maybe even show it to somebody (unlike the other three books I've finished that are neatly wrapped up in brown paper and sitting on a shelf)...

And those are my goals for this year.  I'm cautiously optimistic that they won't be a complete failure since I've already been working for a while on adding in some of them.