On Facing My Fear... 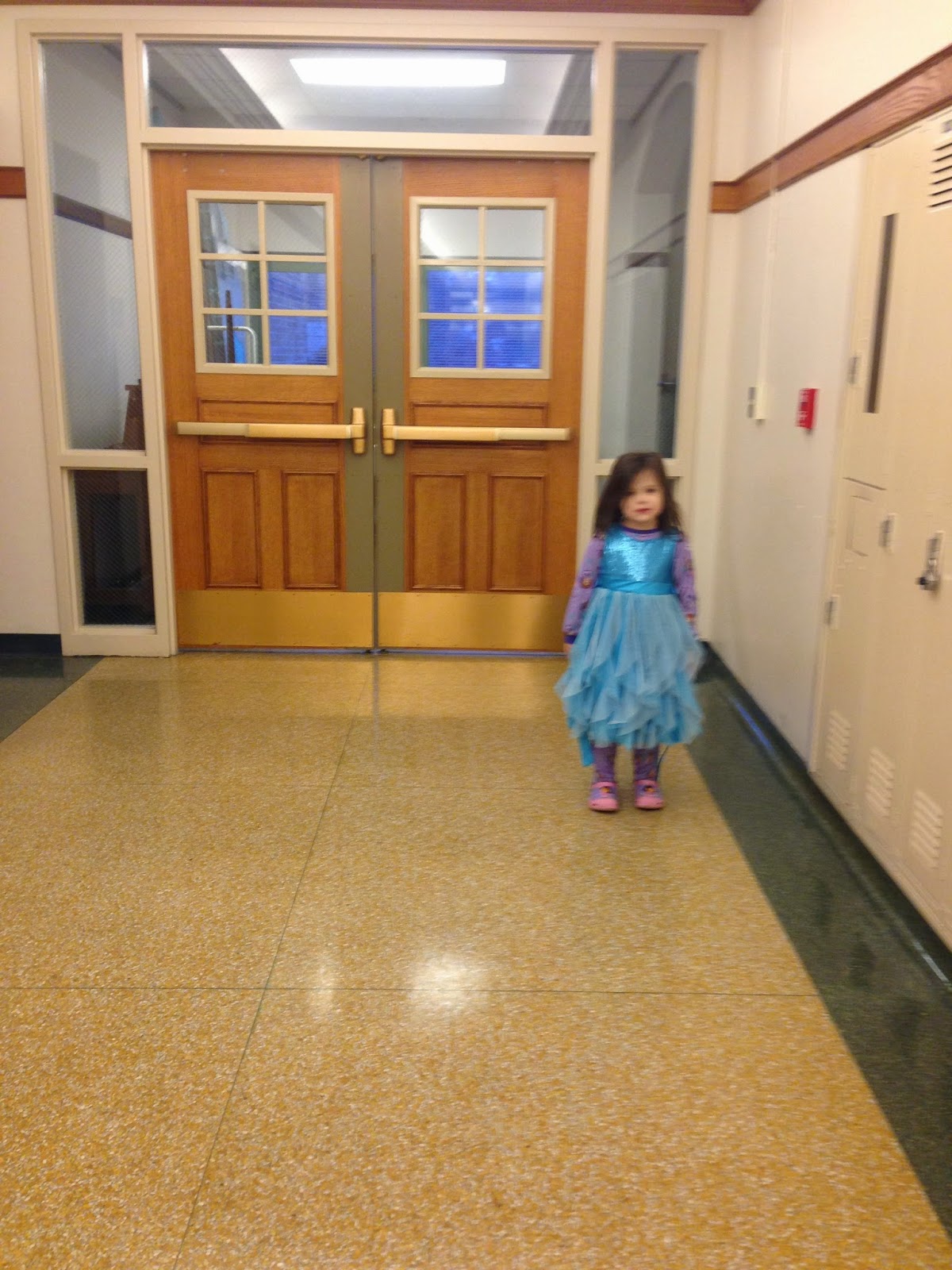 One of my biggest fears these days is how to manage taking the kids out in the van while Paul is at work.  It doesn't seem like that dramatic of a problem, does it?  But I'm always worried that Mae is going to take off and I'll be slowed down by Patch and James and won't be able to catch her.

She's fast.  I'm not fast when I'm wrangling James and Patch.  So the idea of taking the kids out in the van without Paul is something that generally makes me break out in a sweat.  It's also something I've altogether avoided doing for the last three and a half months since James was born.

I did it today. I was out and about with the kids and the van, without Paul.

When Paul announced that he had to work during Sadie's ballet class, I'll admit, I felt a little panicked.  Sadie's ballet school is all about not missing classes as they gear up for the spring performance and she'd already been asking me if I was sure she had ballet and if I was sure I wouldn't forget and how many hours, minutes, seconds it would be until we got there.

The thing is, taking my little crew out in public isn't that big of a deal.  As long as it involves a stroller and not a car.  The loading and unloading of the car is really the weak point for me when it comes to going out.  Inevitably I will have to let go of someone's hand, or hold both Mae and Patch's hand in one of my hands and if a certain wandering four year old really wanted to yank away from me at that point, she probably could.  It makes me very, very nervous.

Paul looked at me like I'd lost my mind when I began to discuss the distance and how it was walkable... if only it was spring and if only it wasn't get dark so early and if only there weren't several inches of ice on the ground, under the snow.  There were a lot of if onlys.

As I made dinner and handed out sippy cups I plotted my strategy.  Here were the possible logistical challenges I worried about possibly facing while getting the kids home from Sadie's class.

Worry #1- My first worry was how to keep Mae and James apart.  Mae adores James.  She tells him she "love, love, loves" him many times a day.  She also love, love, loves his car seat. She thinks it beautiful.  And it's in the seat of the car that Sadie used to sit in, which means it's next to a window covered in Tinker Bell stickers.

This only makes it more awesome and appealing to Mae.

Also, in it's rear facing reclined position I'm pretty sure she thinks it's a bright red lazy boy.  Given the chance she will throw herself into it and attempt to stretch out and take a nap.  I'm not entirely sure she wouldn't try to join him in his car seat if he was already in it.  I've seen her come pretty close to doing it and while I stopped her, I'm not entirely sure what would have happened if the scene had been allowed to unfold. 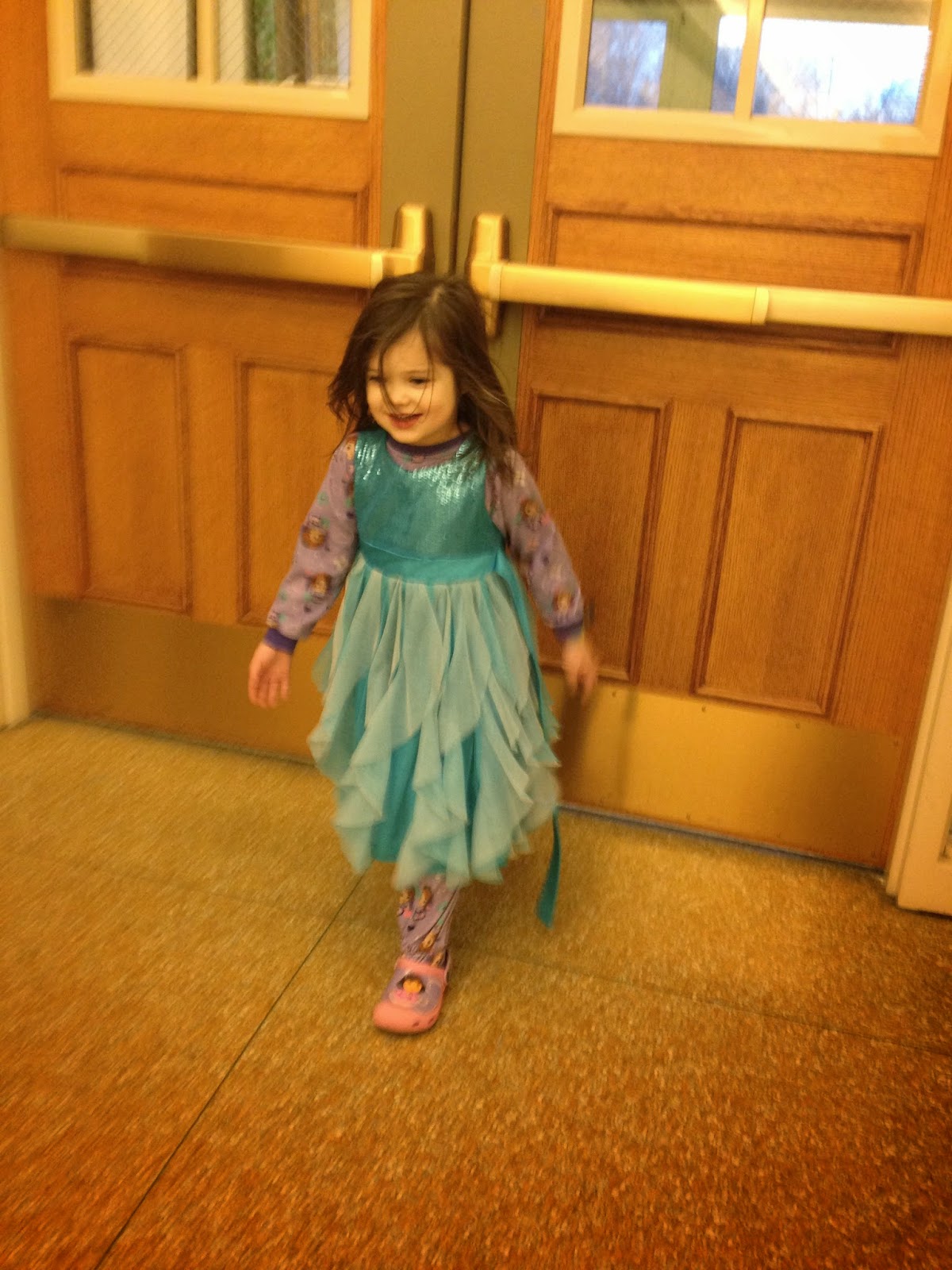 In the past month I have been kicked in the face while buckling certain people in to car seats.  Either Mae or Patch may be totally on board with being buckled in, or they may act, together or separately, like it's a fate worse than death and I'm locking them in to some sort of torture device.

So while a part of me would have liked to keep James on me until certain siblings were secured in their own seats before I put him down in his seat, this didn't seem to be an option.  Because the middle of my chest is right in the line of fire if someone going into the car seat decides to resist.

Worry #3- This was the big one.  My fear is that somehow Patch and Mae would take off running in separate directions towards the busiest high traffic areas they could find while I run in slow motion after them... like in one of those nightmares where you feel like you're running through cement while everyone else can move about normally.  I also imagined my arms having the reach of a tyrannosaurus rex in this scenario, since James would be in the carrier and it's really hard to grab little people when you're wearing a baby on your chest.

So it's not like I was totally irrationally panicking or anything.  Okay.  Maybe I was a little.

We went to the class.  The forty minutes Sadie spent inside were quite the workout.  Mostly it involved redirecting Mae to keep her away from this:

Walking down the hallway to look at her favorite giant mobile:


and wondering if Paul working on Mondays is going to be a regular thing from now on.  Because usually I really enjoy sitting with James during Sadie's ballet class with my planner open and planning my week.  It's relaxing in a week that doesn't have much time for relaxing. 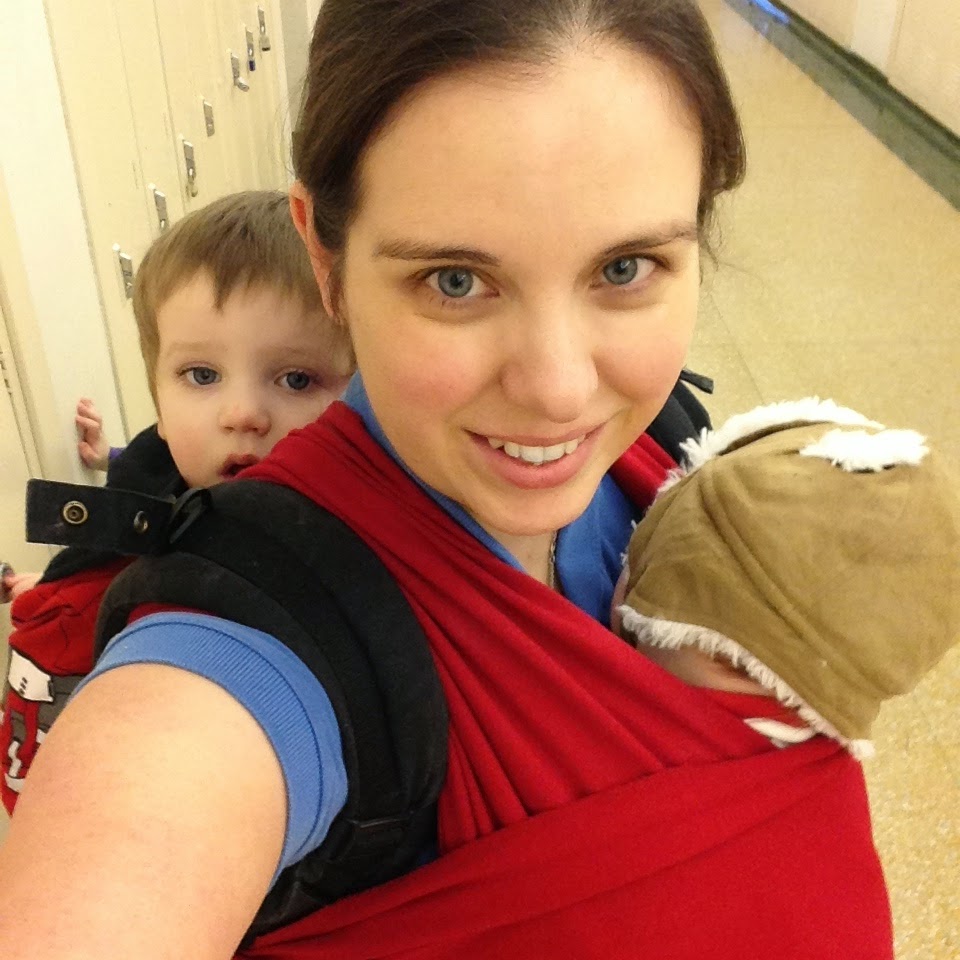 is not even a tiny bit relaxing.  See that stressed out look in my eyes.  It's the look of someone who's praying they can get everyone wrangled into the car in one piece... while also checking to see if Patch is up to no good.

When not turning off the lights in the hallway, or edging closer to the fire alarm, Mae spent most of her time dancing.  Which was the best part of our wait.  She really wanted to go into the class room with the girls.  She settled for dancing up and down the hallway:

When it was time to go I maneuvered our little bunch out to the car, planning on getting everyone in and pulling the door closed behind me.  Once the door was closed I'd figure out logistics, likely putting James in first and then Mae.

﻿﻿﻿﻿﻿ That plan came to a screeching halt, however, when I found that I couldn't fit into the car and close the door with Patch on my back.  In fact I couldn't fit in the car with both carriers on at all.  So I went to plan b.

I put Sadie and Mae in the van and closed the door and walked over to the other side of the car and put James in his seat.  I had Sadie stand next to him to make sure no one climbed into his seat with him in it and hurried back around and got Patch, who was refusing to stand up as I tried to set him down, out of the back carrier, into the car and into his seat.

Sadie was still standing between Mae and James (and Mae was behaving perfectly) and I got Mae snapped in to her car seat and then put Sadie's chair back in place so she could get in to her booster.  Thankfully she can buckle herself.

And just like that we had survived. Mostly at least.  I still had to unload the kids at home.

At home I put James in the wrap and managed to hold both Patch and Mae's hand in one of my hands while closing the sliding door with the other.

Success.  And Sadie actually sang to James and got him to stop crying when I was tucking Patch and Maggie into their beds.  He's been fussy for the past two days and so I was really surprised when I came downstairs to silence and found Sadie sitting next to his bassinet and singing while he smiled up at her!

And maybe tonight can be a confidence building lesson that disaster isn't totally inevitable if I do have to load and unload them into the van by myself.  Although I have to admit that I'm still eagerly awaiting the days when the stroller won't get stuck in the snow if I try to push it down the sidewalk!
Posted by Cammie Diane at 11:07 PM