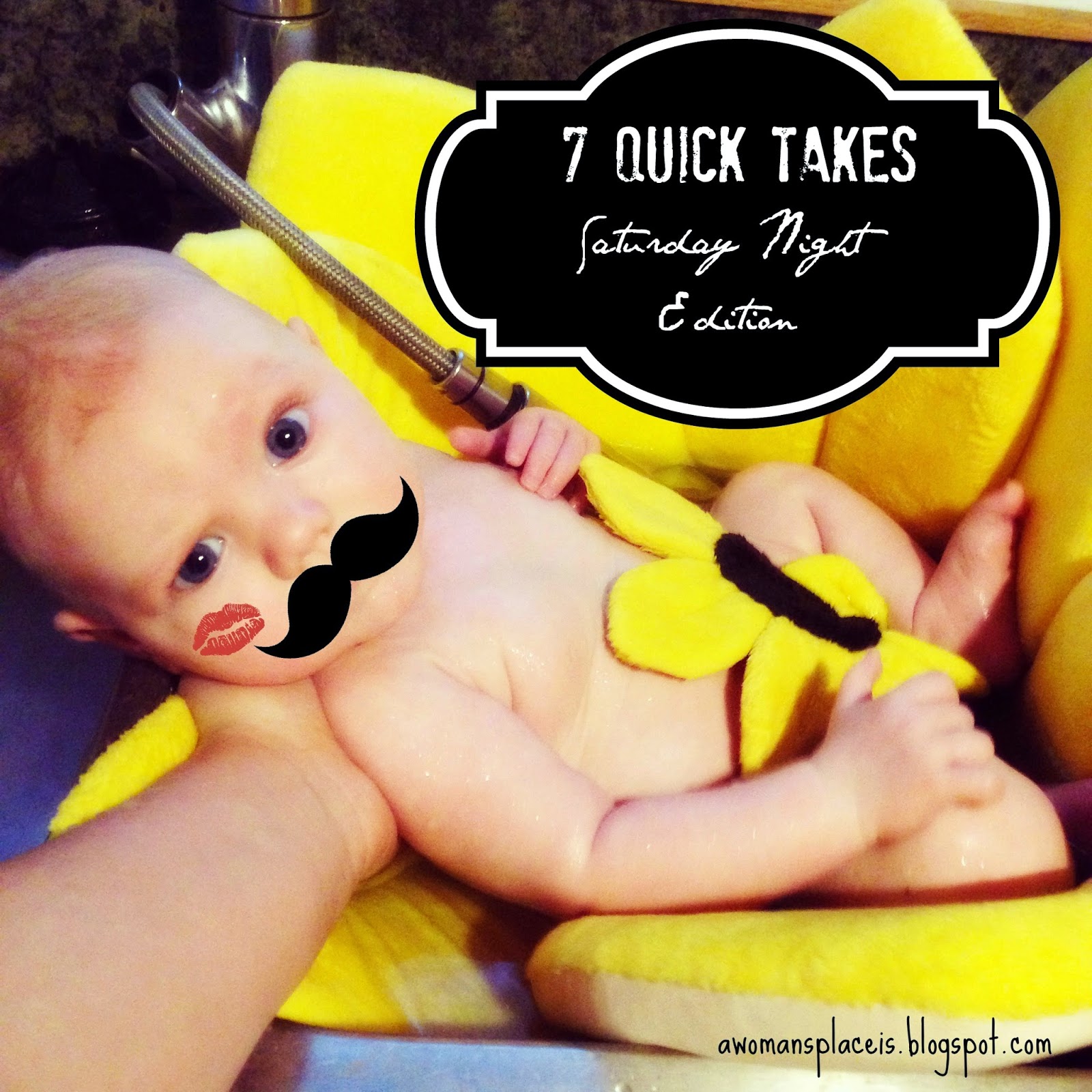 James has finally drifted off to sleep on a blanket near my feet.  There was no way he was going to allow himself to be out of my sight tonight, although he usually falls asleep happily in his bassinet.  Not today, however.  Today he was happy in his bassinet.  As long as he could see me.  The second I was out of his line of sight he would scream his head off.  Then I would step back into his line of sight and he would instantly stop and smile at me.

I think he's got my number.

Today Paul took Patch and Sadie to the store while I stayed home with Mae and James.  After they left Mae wanted to go upstairs and I decided as a special treat, I would show her something.

You see, most of the playing in our house is done downstairs in the room where Mae has therapy, which is connected to the living room.  The kids hardly ever play in their rooms.  Especially Patch's room, since it's tiny.  So I took her up into his room and she saw, for the very first time, his "big bed."

And she couldn't believe her eyes. 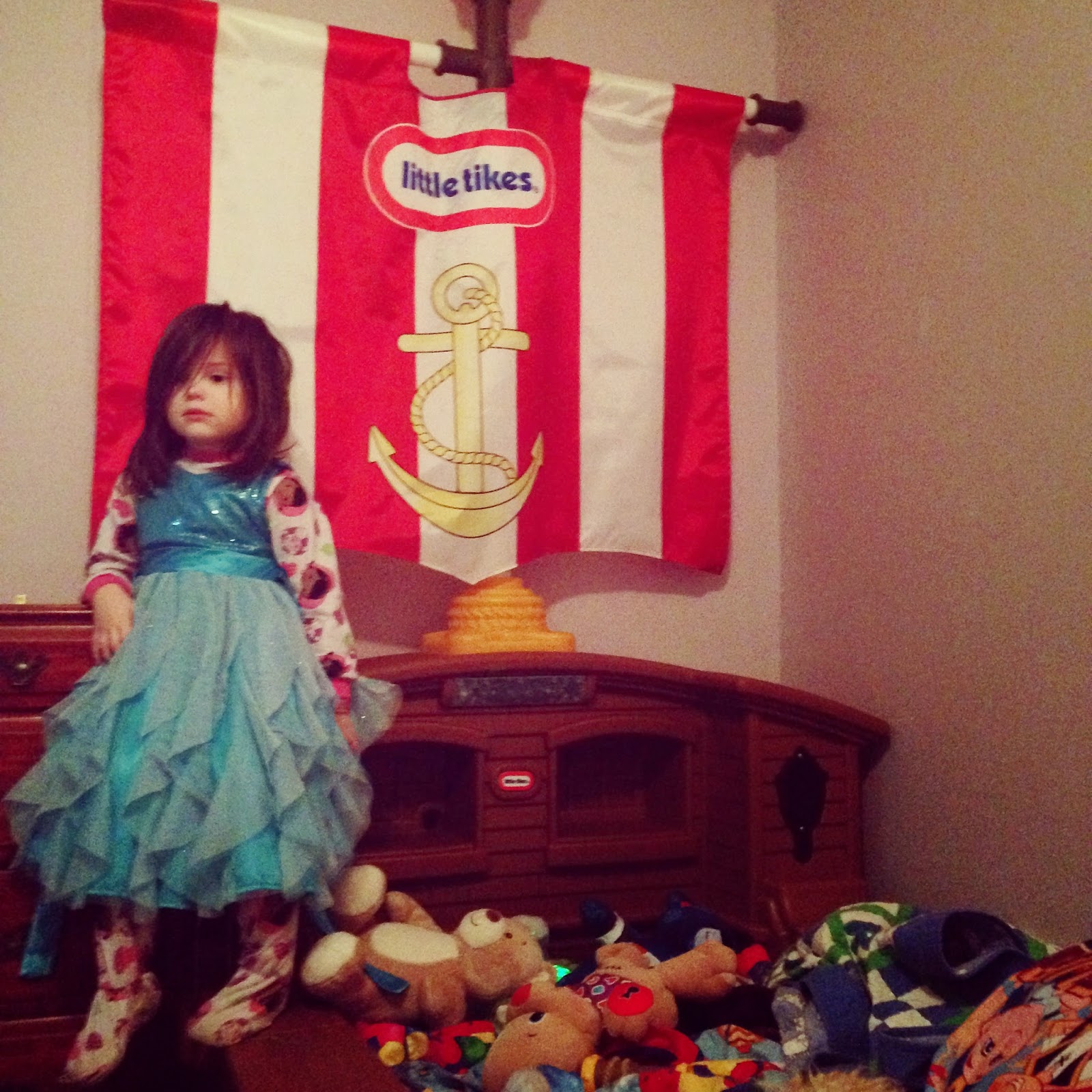 She spent the next hour cuddling with his stuffed animals, steering the ship around the seven seas and loading every single toy that she could find into the bed so that she could sail off with all the loot into the sunset.

Today, my least favorite moment of all the sensory seeking moments, ever, occurred.

I won't name the child in question.  However.  It won't be all that hard to figure out.  Because... talking...

Someone, in the midst of a sensory seeking moment, nearly knocked out/pulled out one of their permanent teeth.

Can I tell you how queasy just the thought of it makes me.  Blood doesn't really bother me, but permanent teeth being knocked out?  I shudder to think about it.

So I asked the aforementioned child exactly what happened.  "Did you get hit in the mouth?" I said.  "Did you fall?"  The child shook their little head.  A second later they made a strange movement and this conversation followed:

Me:  "What are you doing?"
The Child (TC): "I'm showing you through interpretive movement what happened to my tooth."
Me:  "Could you tell me through words instead?"
And then came the explanation.

Apparently I need to fill my house with chewy toys.

The tooth is still in place.  Right now.  It's loose.  And I guess I'll be calling the dentist first thing Monday morning.

Why do these things always happen on weekends?  And who manages to knock out their own front tooth?

Sometimes I can't help but think that it's a very good thing that Patch isn't in day care, because, as the third child, he seems to be growing in to quite the little bruiser.  And while he's definitely made huge strides in not biting and hitting almost immediately after trying to use those two particular strategies to get his way, getting him to stop shoving people has been a bit tougher of a habit to break.

And for some reason I have a feeling that if he were in daycare or preschool I would probably, very shortly, receive a phone call telling me that he'd bit a half dozen children and that I needed to come pick him up immediately.

Thankfully he wasn't involved in the tooth incident... but oh to be two!  It's amazing how he can be so snuggly and such a rough and tumble little guy all in a five minute span!


Mostly though, he's seems perfecting playing the part of annoying little brother.  Today he was sitting a ways away from her and she complained that he bumped her and as I said the words "give your sister a little more space" he flung himself on top of where she was laying and went totally limp before rolling dramatically to the side.

He may be going for some sort of Annoying Little Brother of the Year award. I'm pretty sure that letting Sadie watch Master Chef Junior online and then agreeing to throw in cooking classes as part of our homeschool curriculum is one of the best things I've ever done.  So far she's made cupcakes, potato soup, salmon pasta and waffles during her first week of lessons in the kitchen.  She begs to help with dinner... and she's practicing a lot of the skills they work on in OT in the kitchen.

She's already begging to take over cooking entire meals on her own, which I don't think we're quite ready for, but as it is right now having someone who's begging to do every little task in the kitchen is a big, big help! 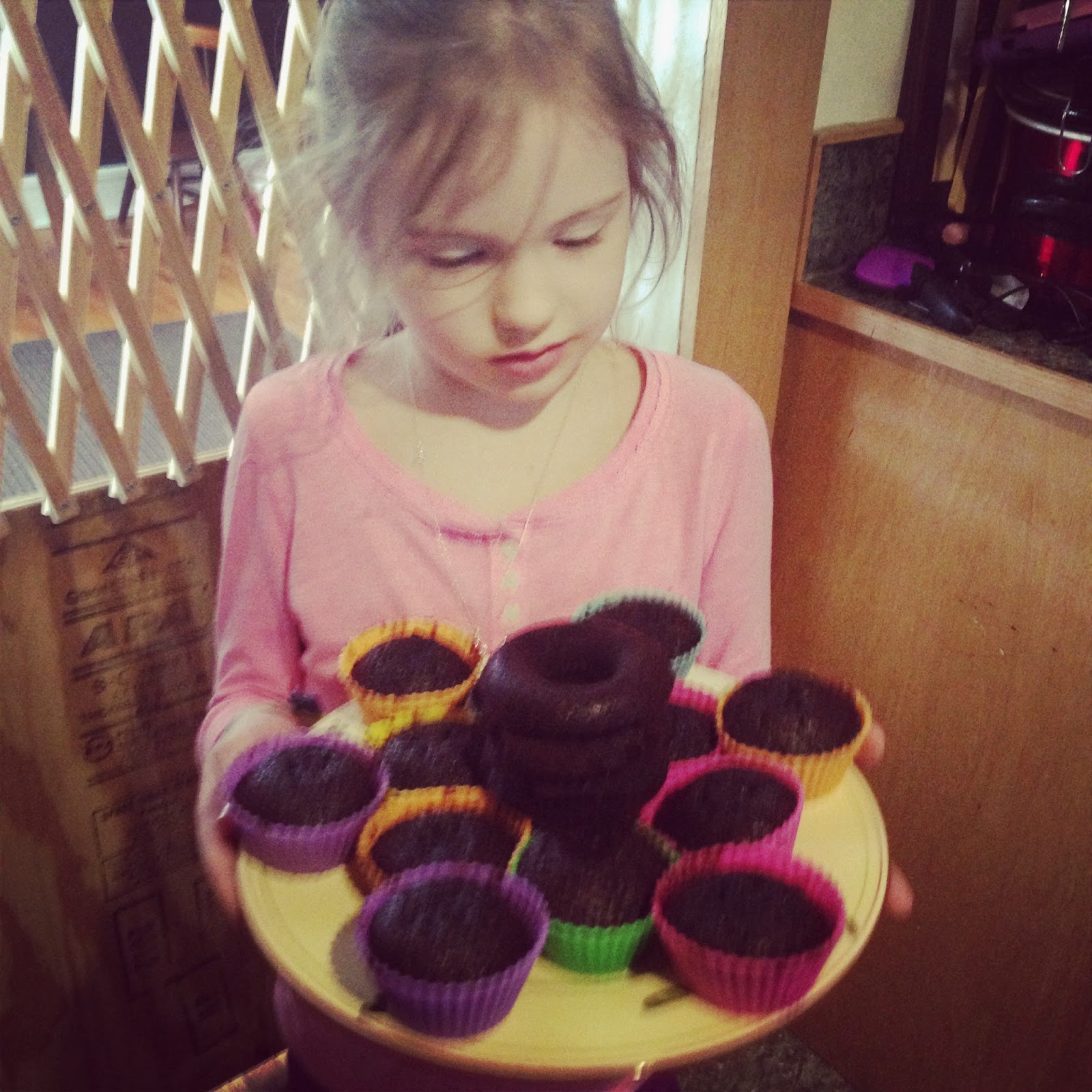 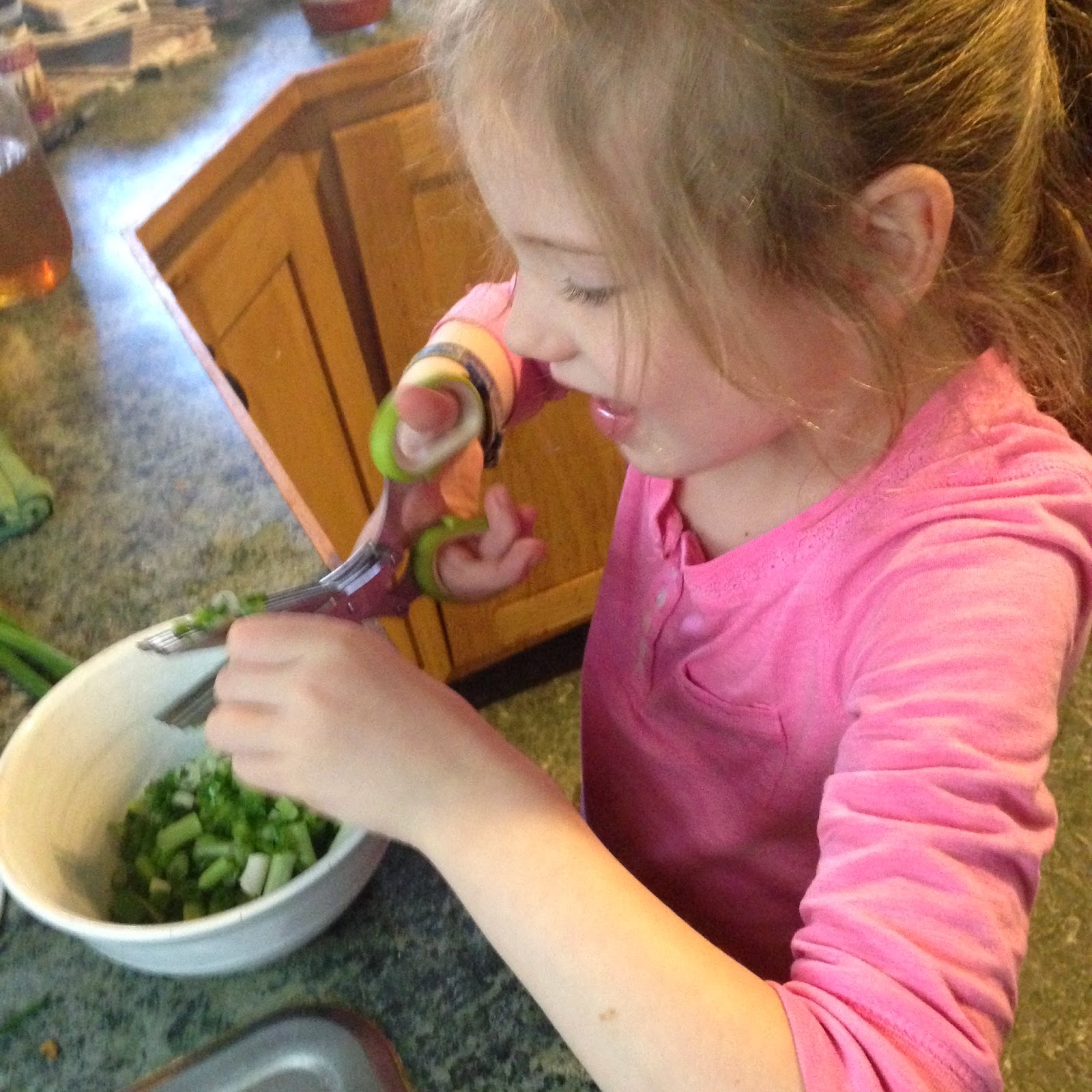 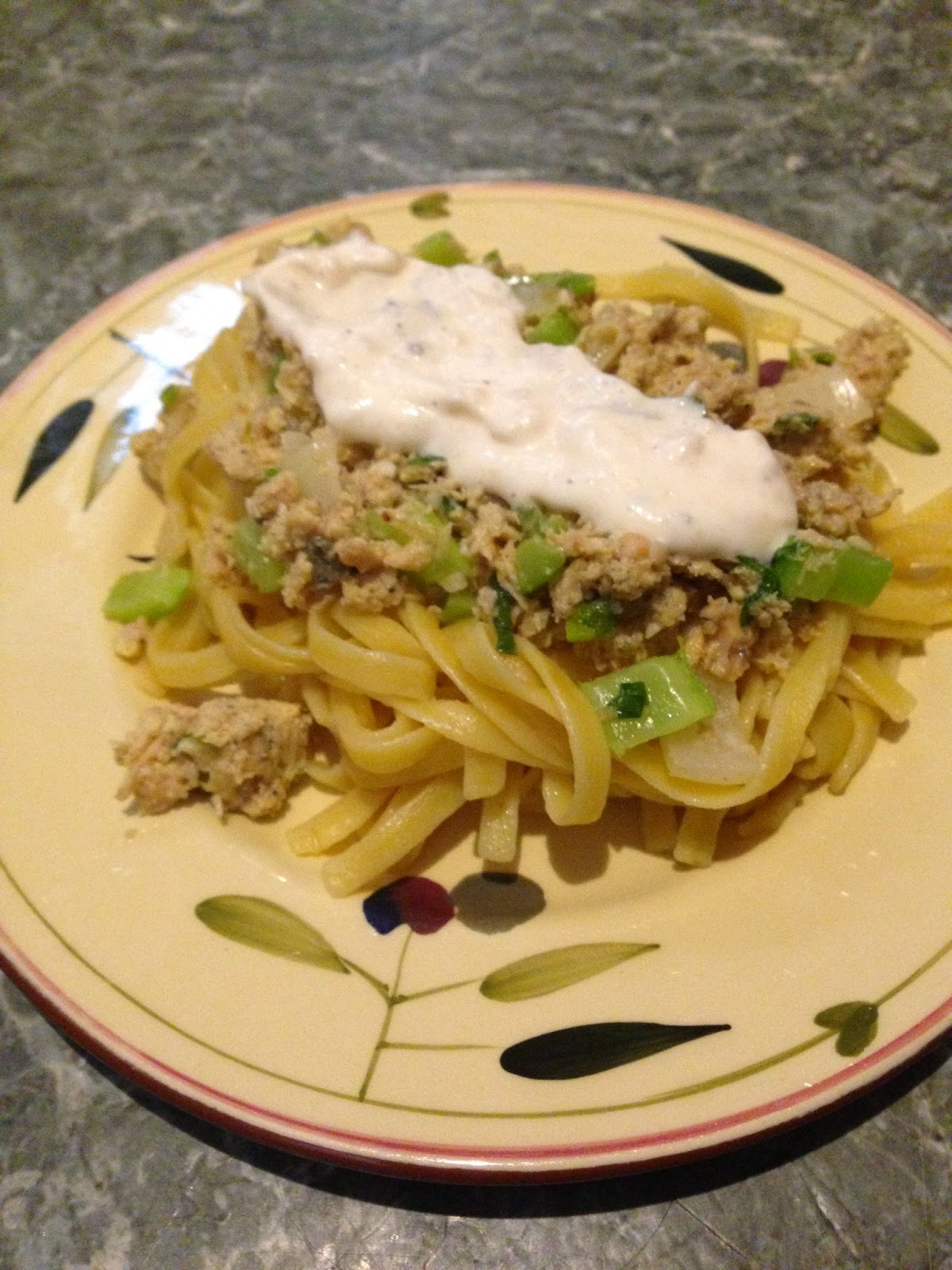 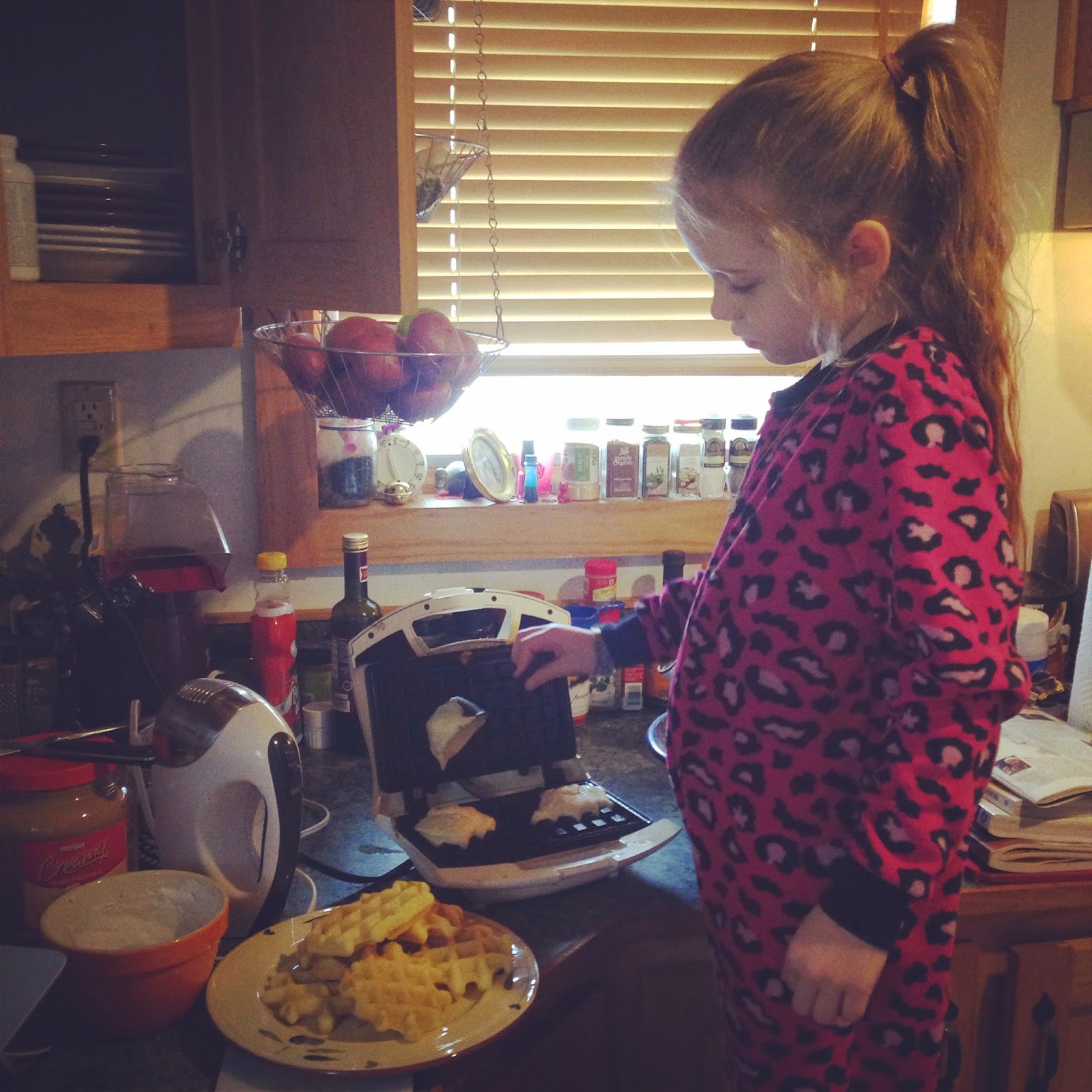 The cold this year hasn't been anything like the cold last year (so far), but it has been cold enough lately that we have been spending a lot of time inside. 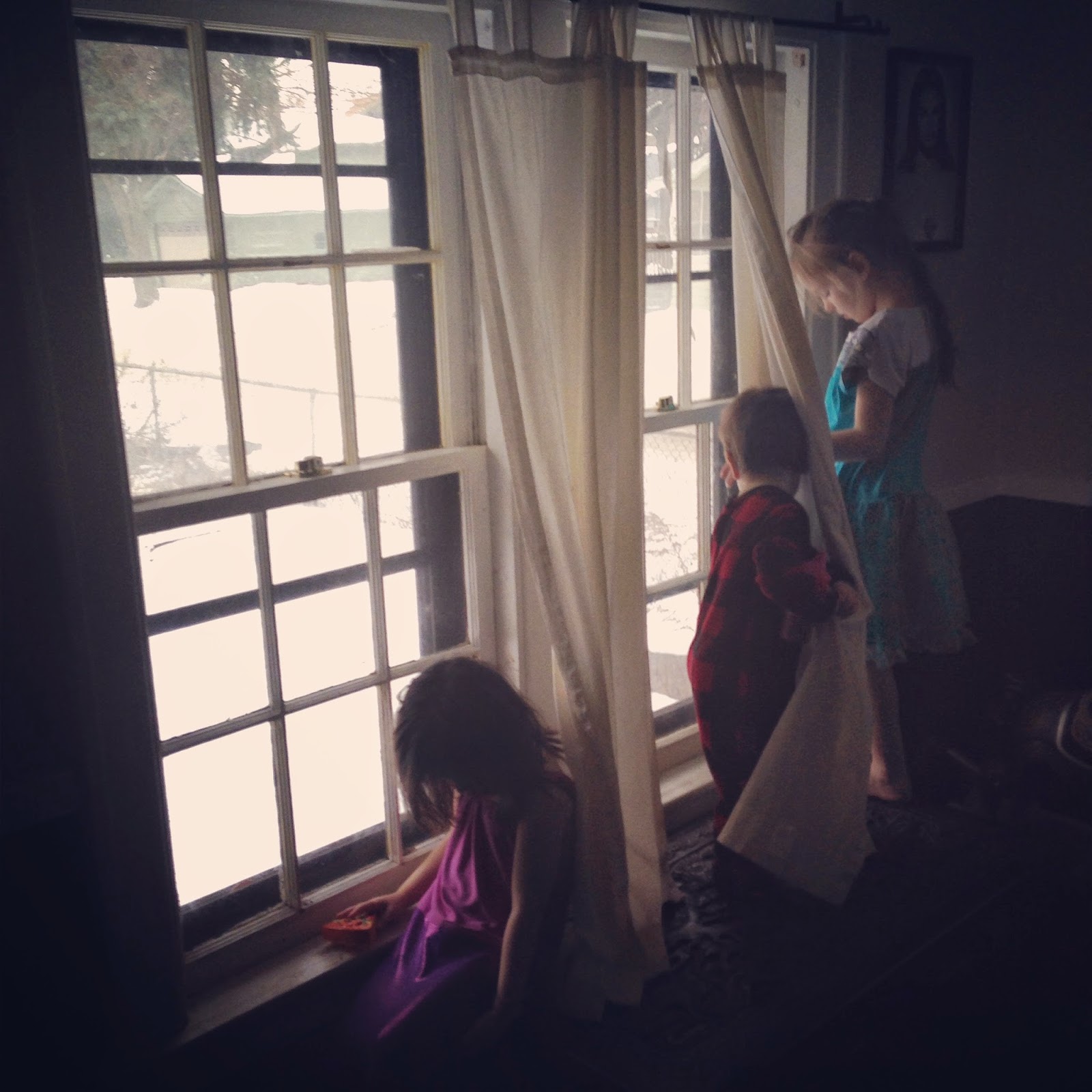 My plans for winterizing the house were pretty much destroyed by a certain little mermaid.

We tried to put plastic over the windows... and then staple up felt once the first layer of plastic was destroyed and a second was put up, but after seeing the complete destruction of anything that kept her from looking outside (or even pressing her face close to the glass) I realized that we were on the losing side of this particular battle. So the windows have stayed uncovered.

When I was pregnant with James I didn't buy many things.  One tiny splurge I did make was when I was that the Blooming Bath

was on Zulily.  And now after writing that last sentence I just searched and found out that they do have the Blooming Bath in Ivory on Zulily right now for around $20 less than it is on Amazon (the sale ends in nine hours).

As you can probably tell I'm definitely a fan.  And so is James.  I had to work to catch these frowns! 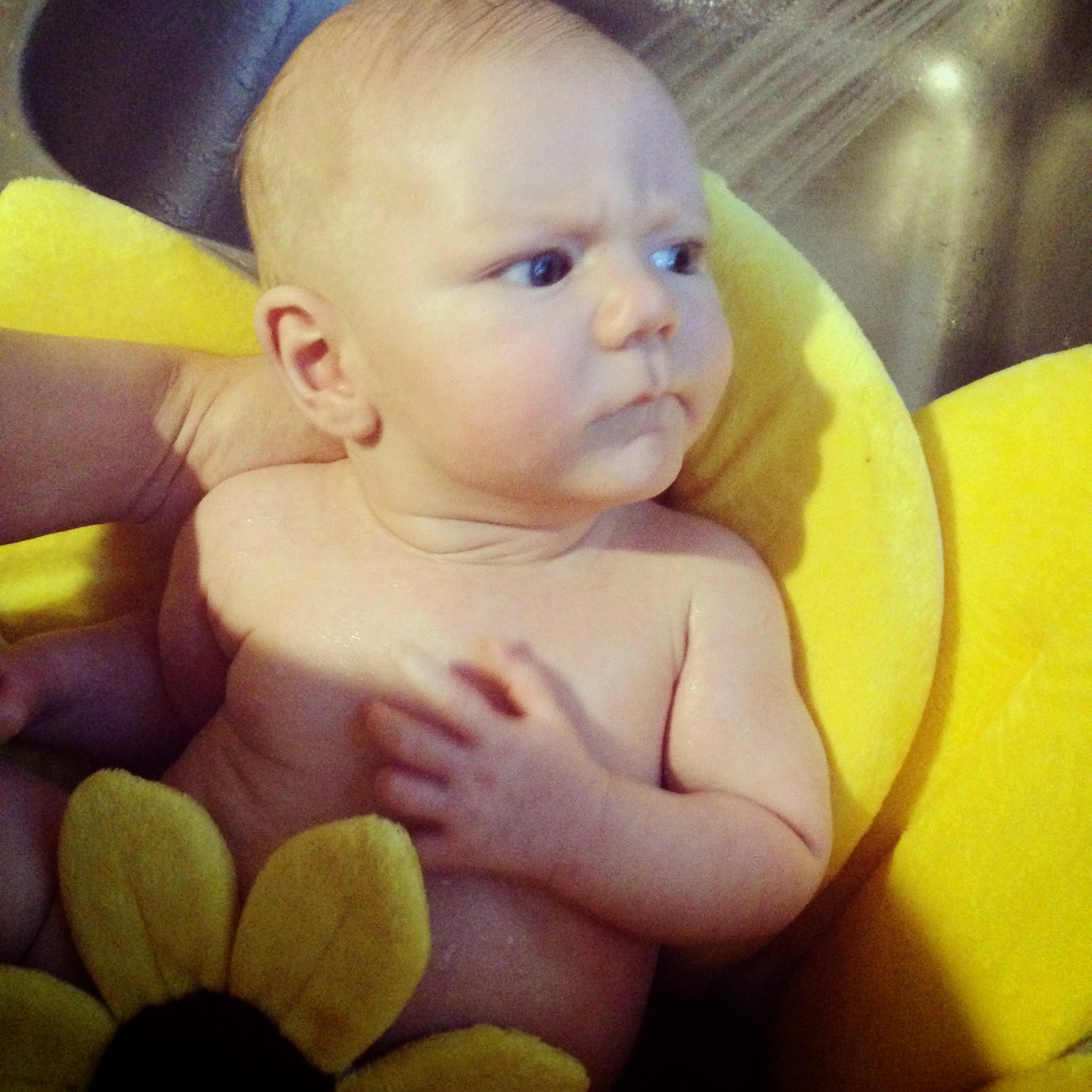 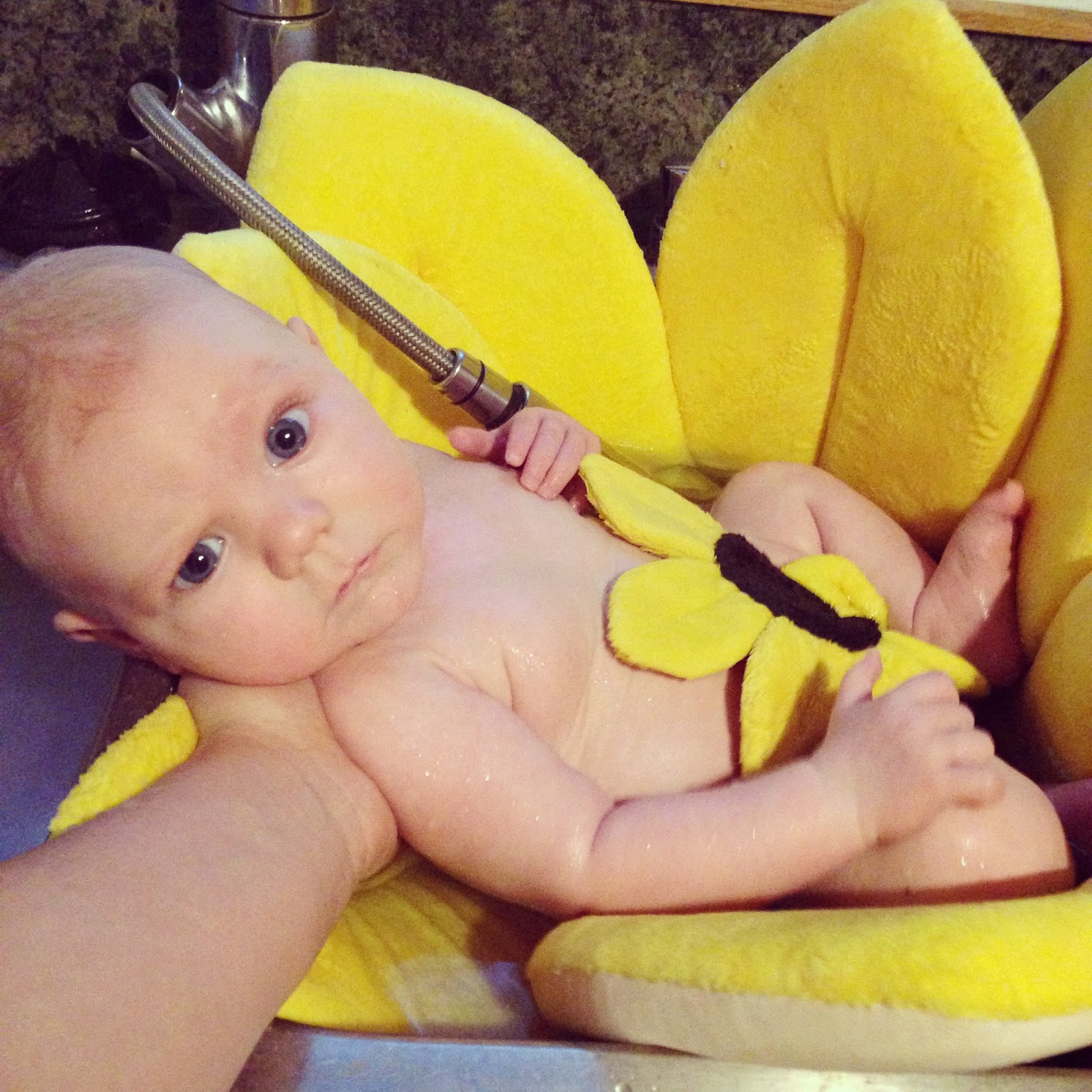 For more Quick Takes head over to This Ain't the Lyceum!
Posted by Cammie Diane at 11:51 PM