10 Facts About Me and My Better Half 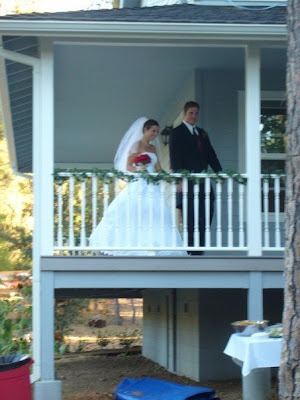 Betty Beguiles is hosting a 10 Facts About Me and My Better Half post and I just couldn't resist! Here goes:

1.
I met Paul when he was working as a doorman at a restaurant in Marin County. One of my best friends was about to start dating one of his friends and they introduced us.
2.
When Paul walked in the room I thought: “I could marry him!” And then I thought “Stop thinking that! That’s just silly!”
3.
We went on our first date two days after we met and were married a year to the day later.
4.
He popped the question on a freezing cold beach on Valentine’s Day!
5.
We’ve lived in an old fifth wheel trailer on an air mattress, in a 10x15 ft cabin without indoor plumbing (try that when you’re pregnant!), in a rather dramatic apartment (thank heavens that’s over) and finally, in my favorite home so far, a single wide mobile home in the greatest park in the world (surrounded by friends!).
6.
When people ask how many kids we’d like to have he always says (in a somewhat joking/ somewhat serious tone): “We hope at least seven.” I get very tired of the “Your poor wife” comments!
7.
He was hired by the Secret Service and I was hired by the CIA’s clandestine service before we were engaged.
8.
We named our daughter’s after relatives on both sides. There are Sadies in both our family trees and Margarets on both sides as well (I also have a cat named Sadie that I named in fifth grade... to give you an idea of how long I had the name in mind!).
9.
When the doctor came in and said “I think we need to do a c-section” (after five hours of pushing) and Paul said “We didn’t want to do a c-section” I could have killed him. Thankfully I was in no position to do so.
10.
Our fifth wedding anniversary is coming up this September! Time flies!
Posted by Cammie Diane at 7:36 PM