Here's my latest recipe. I started with an actual recipe, but by the time I'd finished I'd changed it so much (I just can't help myself) that my recipe really had very little in common with the recipe I'd begun with. Here it is:
Chicken Enchiladas

Extra Virgin Olive Oil
2 Onions (small to medium)
1 tsp Salt
3 Tbsp. minced garlic
3 Tbsp. chili powder
3 Tbsp. cumin
1 Tbsp. Paprika
1 Tbsp. sugar
1 packet Taco Seasoning
1 28 oz can red enchilada sauce
1 lb. boneless skinless chicken breasts
2 cups shredded Cheddar
3 Tbsp. chopped peperoncinis (diced into small pieces)
1/2 cup minced fresh cilantro
6 tortillas
Sour Cream (to serve with)
Preheat the oven to 425 degrees.
I began by sauteing the onion in a pan coated with olive oil. Once the onion was nearly cooked I added the garlic and seasoning, quickly followed by the red enchilada sauce. After simmering for about five minutes I added the chicken, making sure it was completely covered with sauce. I covered the pan and allowed it to cook, stirring frequently until the chicken was cooked through.
While the chicken cooked I coated a 9 x 13 inch pan with cooking spray and minced the cilantro and peperoncinis and grated the cheese. When the chicken was done cooking I put it in a large bowl with the cilantro, peperoncinis and 1 cup of cheese and shredded it (because it was still hot I used a knife and fork!) and then mixed it well, adding a 1/2 cup of the onion/garlic/sauce mix in (the picture below shows the chicken before the 1/2 cup is added). 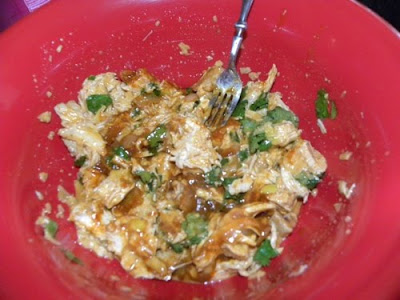 Here is a picture of the sauce after the chicken has been removed. 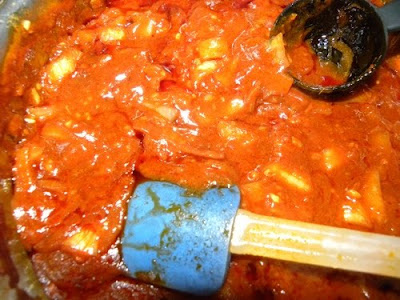 I placed the chicken, sauce mixture on the middle of the tortilla and then added a 1/4 of a cup of sauce on top of it: 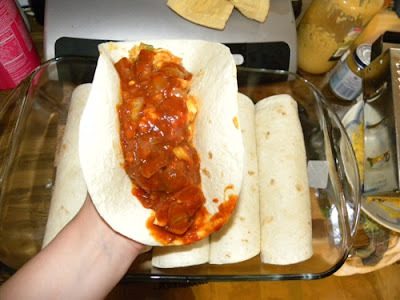 Once the tortilla was filled I carefully folded the edges over and placed the seam on the bottom of the pan (they stayed shut better than I expected them too!): 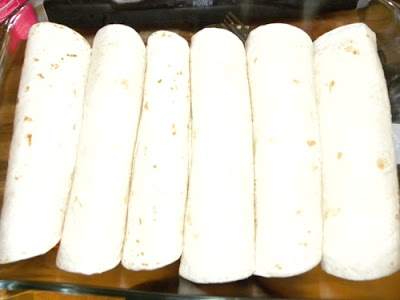 I cooked the enchiladas without sauce for 7 minutes and then added the remaining sauce over the top. They then cooked (at a reduced heat of 400 degrees, for another 20 minutes, covered with foil (or they would have if I hadn't been out of foil!): 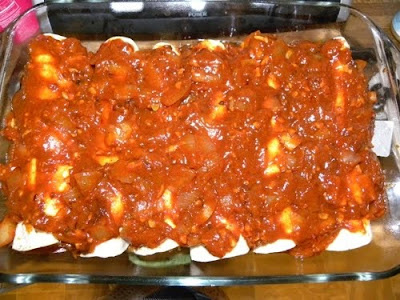 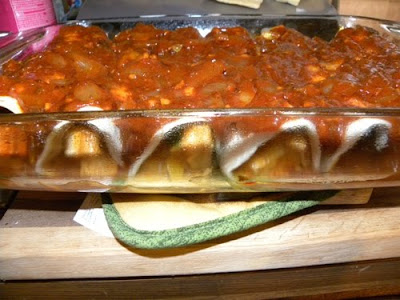 After twenty minutes I added the rest of the cheese (about 1 cup). Here's the finished result! 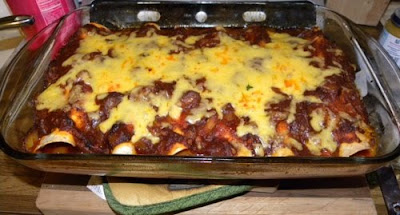 We served it topped with a dollop of sour cream. It goes well with yesterday's taco dip recipe! 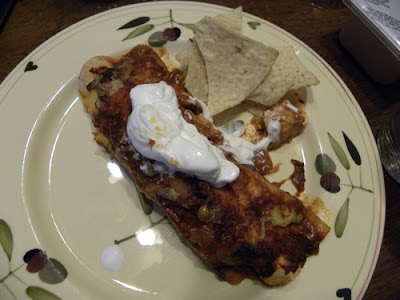