How To Sew My Red Dress 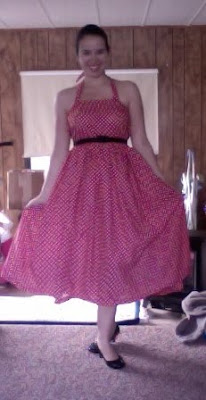 Here's a (somewhat rambling!) how to for how I came up with the red dress I made. I'm planning an Easter Dress this week, and I'll try to document it a little bit better because I began wishing I'd taken pictures as I sewed this one to help with the explanations!
I began by cutting a rectangular piece of fabric (the width of the fabric itself) that was roughly four yards long. This was to be the skirt. I then cut about six inches off the width (while it was still folded) so that the skirt would be a reasonable length. At that point it looked like it would be floor length, but I figured it would be easier to shorten later than to add fabric back (and somehow my skirts always end up being shorter than I originally planned, so I was taking extra precautions!).

I then sewed the two ends of the skirt together (right side facing). Next I ran a basting stitch along the top of the skirt (about an inch in) and gathered it.

For the top I cut another two more rectangular pieces. Together they were about eight inches wider than was necessary to go around my top under my arms (with a dress already on). I also over estimated the length this time, estimating it going down to above my hips since I knew there would be a wide hem for the elastic at the top and the bottom.

I stitched the two side seams of the dress top together (right sides facing) and folded over the bottom (twice so the edges weren’t showing, with the second fold being just enough to tuck the ends under) so that it was wide enough for a sewing allowance plus the width of the elastic that I planned on using (it ended up being about an inch). I sewed that seam. I did the same thing on the top of the top.

I then tried on the top. It should be much too wide. I then took two pins and used them to mark the amount, at both the waist and the bottom of the top seam that the back need to come in to make a snug fit. Using these pins as guides I made to vertical lines of stitches where the ends of the elastic would be and used a seam ripper to make to small gaps in the stitches of the hem where the elastic will be inserted (I repeated this on the top and the bottom).

I then adjusted the width on the top of the basted skirt to match the bottom of the top, faced the right sides together and sewed at slightly more than an inch (so that neither seams was showing).

I estimated the amount of elastic I would need to tighten the back (and make it wearable at fluctuating weights!) and inserted it into the top and bottom seams using a safety pin as a guide. The bottom piece of elastic was slightly shorter than the top piece (they were both between four and six inches). I then sewed two seams over the elastic (vertically at either end to hold it in place) and sewed the gaps where I’d removed stitches closed.

Here I retried the dress on and found that it was still a little loose. To make the top fit the way I had imagined I added two darts, one on either side (towards the sides but on the front). This basically consisted of figuring out how much the top needed to come in (about an inch on each side) and marking the location evenly with pins. I took the dress off and created a triangle with pins that was about three inches long. At the top of the dress it was around an inch wide and it narrowed along the three inches. I sewed along the pins, with two lines of stitches, removed the pins and then trimmed the inside of the triangle so it wasn’t bulky. When I tried the dress on a second time it fit perfectly (and would stay up without straps).

To add straps I folded two long pieces with one end short end tucked in and sewed in place first (3 to 4 inches wide and roughly the length of my arm) and tucked the edges in (so they were long enough to be sewed in place) and pinned them (I’ve sewed quite a few straps that were of the “turn inside out” variety and I just don’t have the patience for them very often!). While I sewed these because they were easy to do, they actually ended up contributing to the “look” of the dress with the neat white seam down the strap!

To finish the dress I hemmed it to the length I finally decided on (a little above the ankles) and had my third homemade dress!

Email ThisBlogThis!Share to TwitterShare to FacebookShare to Pinterest
Labels: How To..., My Sewing Project, Sewing