I guess I was inspired by yesterday's shop anniversary, because I decided to open a second shop with an idea that I've been working on for a while. Over the course of the past few days I'd finally began to put the plans of the past few months into action to make them a reality and now I have a second shop named... Sadie's Saints!
Sadie's Saints was inspired by Sadie's love for her little nun doll. I began searching for other saint dolls, but most that I found were either tiny, or wooden or expensive! And so I began cutting out patterns and experimenting with making simple, cuddly dolls.
Sadie's Saints is definitely an ongoing process and I'm sure the dolls with develop and change with time! But tonight I posted the first doll I am going to put up for sale on the site... And it is (of course!) the Virgin Mary.
I dressed her in cuddly blue fleece, with merino hair and a hand sewn face. She stands seven inches tall. Now for more sewing! I have work to do! 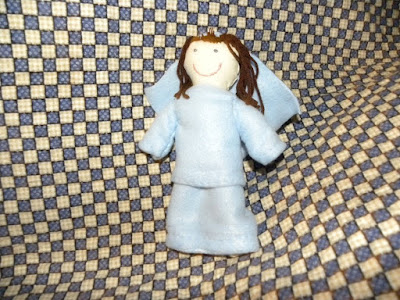