Would You Let Your Husband Cut Your Hair?

If you read my blog much there's a good chance that you've noticed that my hair is pretty much never down. I could blame it on Mae Bae and her hair-pulling little hands, and that is partially true. However, the other half of the reason is that it's pretty unruly when it's dry and the effort required to make it behave involves the whole blow drying and curling iron routine, along with copious amounts of hair product. That sort of time consuming regimen just doesn't fit into my day. Besides, now that we're in Florida I'm not sure that even that routine could guarantee hair that stayed the way I would want it to for more than five minutes.

As a result I rely heavily on buns and braids.

I've been meaning to have Paul cut my hair for about six months now. He cut it some time after Mae Bae was born (so over a year ago), but since it's up in a bun from dawn until dusk I usually don't notice it. It was definitely well over due at this point, so when Paul got home from class today I found my sharpest scissors and handed them to him.

Here's the before picture: 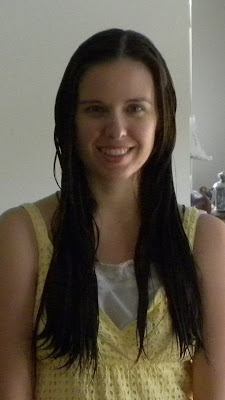 I asked for three or four inches off. When I saw the first strands on the floor it looked like closer to six (and I was a little nervous). Then Sadie came in the room and her eyes turned into little round saucers. She ran to get her toy mop and spent the rest of the time trying to sneak around Paul to get at the hair while questioning Paul about what he was doing to Mommy's hair. We did tell her hair cuts could only be given my grown ups...

And now for the results: 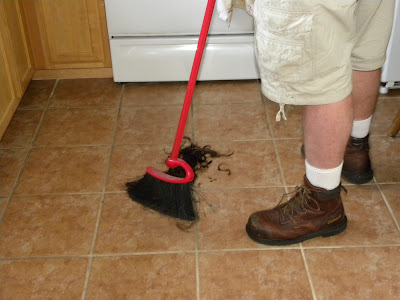 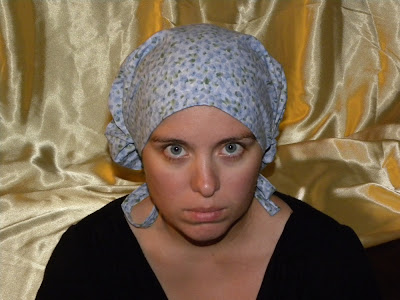 I'm kidding. I've very happy with the results. My hair feels much healthier. And between the haircut I gave Paul yesterday and my haircut today, we saved about forty dollars.

Now I just need to get Paul to pencil in my haircuts a little more frequently. Maybe once every three months? It's definitely a change from college where I set up appointments to have my hair cut and colored (bright red) every four weeks! 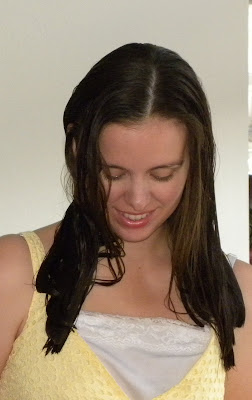 And lastly, just for fun, I set up a survey on the side panel (you can answer in the comment section here too if you feel like it!). Would you ever consider letting your husband cut your hair? (and just as importantly) Would he consider giving it a try?

I'll admit I was pretty nervous the first time I handed Paul a pair of scissors and let him near my hair. But it's worked pretty well for us (I was already cutting his hair... If I hadn't I'm not sure I ever would have thought of it!).

Sadie did have her own response when I, teasingly, asked her if she wanted Daddy to cut her hair. It was an adamant: "No way!"

And later in the day when I had my migraine she came over and laid down next to me and said: "Don't worry Mommy..." followed by talking about Daddy cutting my hair and putting it in the trash. She apparently seemed to think that my not feeling good was directly related to the hair cut. She even went and found her sippie cup filled with milk and put it in my hand. So while she told me it looked "pretty" she remains a bit skeptical of the whole thing!
Posted by Cammie Diane at 7:19 AM

Email ThisBlogThis!Share to TwitterShare to FacebookShare to Pinterest
Labels: Living on a Little