I've been a pretty big Pinterest fan lately, mostly because of my "Practical" board, where I pin ideas that will help in day to day life.  Over the past months I'd collected plenty of cleaning solutions, and I impatiently waited to try them out until after the move and until the house was, for the most part, unpacked.

You see, three of the four people in our family are really quite allergic to any sort of cleaning products with fragrances.  I thought we might be able to get away with lavender essential oils in a fabric softener, but honestly, the fragrance problem seriously limits our shopping possibilities as it is.  At the moment I'm also trying to figure out what to do when we travel... because staying in a hotel inevitably means two little bunnies covered in hives from whatever cleaning products are used on the sheets (I suspect it's fabrics softener since that's what we all seem to be the most allergic too in store bought form).  Do I make them there own little sleeping bags to bring along?  I'm leaning towards that, although I doubt they'd stay inside of them!  But I digress.  Back to the cleaning product adventure:

On Wednesday I made a list using the recipes that I wanted to try and on Friday the whole family made the cross town trek to the store to search out the supplies.  While Paul and Mae Bae cruised the store in one cart (Mae Bae isn't a fan of stopping and staring at cleaning products for long periods of time), and I bribed Sadie with reminders that the little girl who was good in store would get two pennies to ride the Sandy horse twice when we were done (she wasn't fussing, she did very much want to prance and dance and twirl around each aisle, while I kept her from careening into other customers, so the promise that stillness= two horse rides was very, very helpful).

I wasn't sure what many of the items I was looking for even looked like. I guess over the years I've just gone into the detergent aisle, grabbed the box or bottle that was familiar, put it in my cart and moved on.  Washing soda?  Would the store have that?  Liquid glycerin?  Was that really in every band-aid section as one blogger said.

After half an hour of searching I had a collection of inexpensive basic cleaning products.  Here are a few of them.  There were so many that the larger containers were put straight down in the laundry room (in our deep, dark, scary basement...). 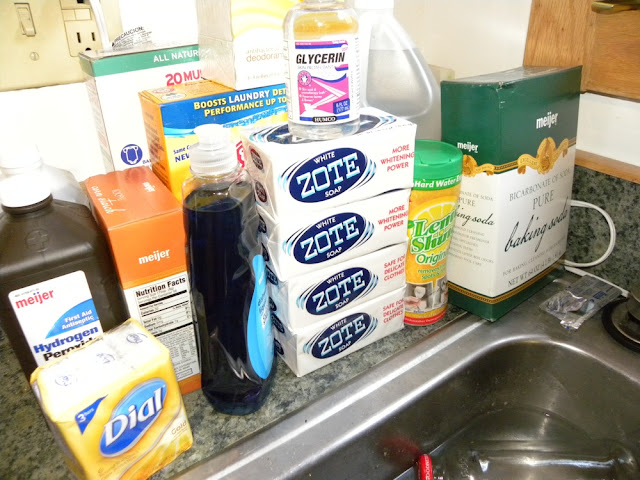 I decided to begin with the laundry detergent recipe that I'd been waiting to try.  I actually didn't end up following it to the letter, because apparently my shopping list had been somewhat incomplete and I'd missed a few details.

So I took ideas from two recipes (this one and this one) and adjusted a few amounts slightly.  Here's what I came up with:

I began by grating the soap before putting it in the blender/food processor... Mostly because I've seen both our blender and food processor struggle with far less in it than a soap bar: 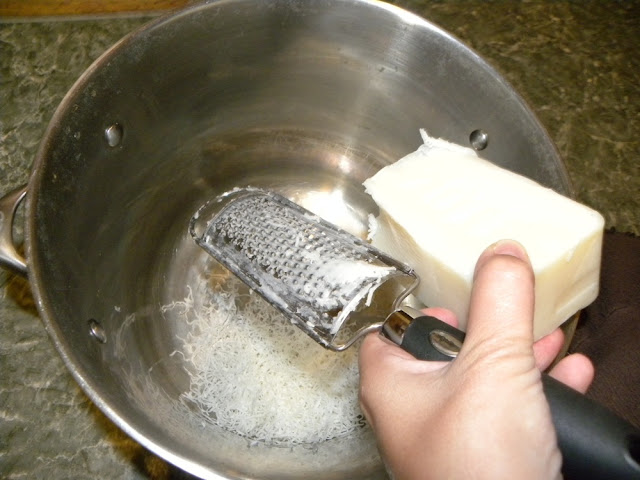 Five minutes in Sadie abandoned playing princess and came in to help.  She loved the lemony smell of the Zote soap that we were using and had to keep smelling everything as I grated it: 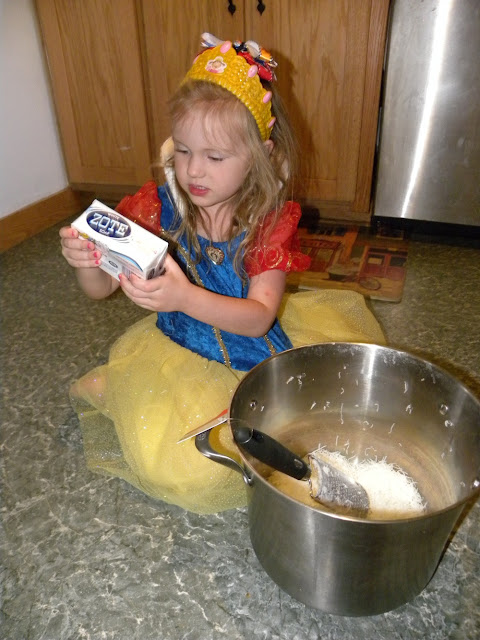 She was rather disappointed that she couldn't be the one to do the grating... 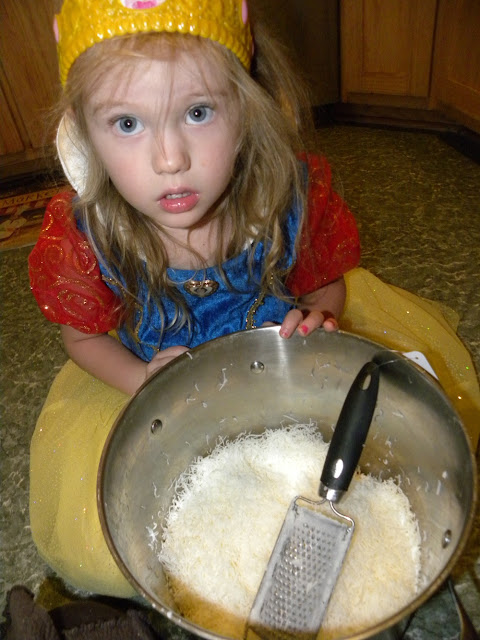 The overfilled blender was a mistake.  But truth be told, the blender did no better when it was basically empty... maybe because blenders that cost less than $20 generally aren't that awesome at what they do.  So after finally getting this section of the batch grated I washed it out and moved on the my food processor. 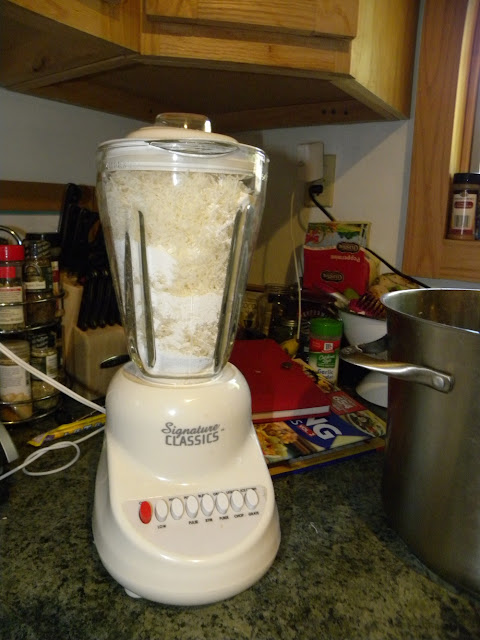 When grating the stuff in the blender and food processor I did add a couple scoops of the oxy clean to make the mix easier on the machine.  The food processor had no trouble grating everything into a powder quickly.  Here's what it looked like going in: 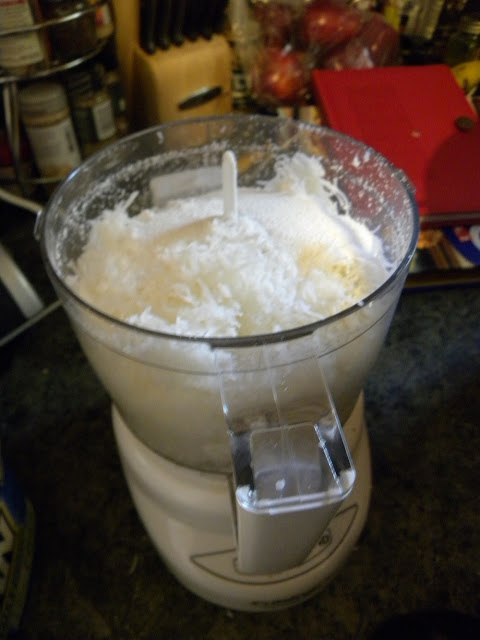 And after it had been grated: 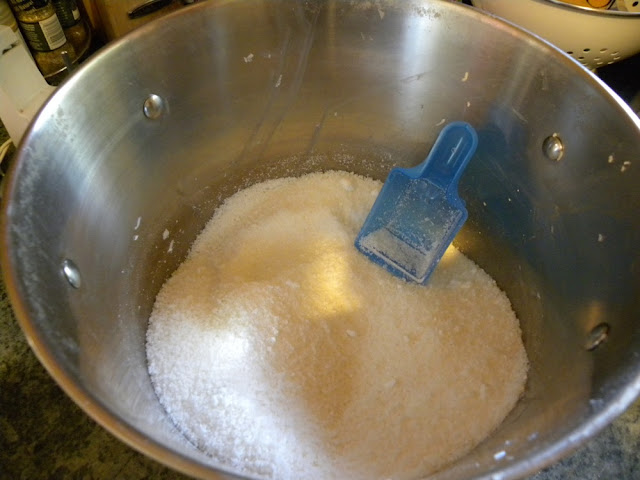 Next I put on my elbow length rubber gloves, mixed in all the other ingredients, and muscled through mixing it.  Mixing it was the hardest work, since my giant stock pot was probably a little two small for the job.  Finally, however, it was done and I sorted the batch into separate containers: 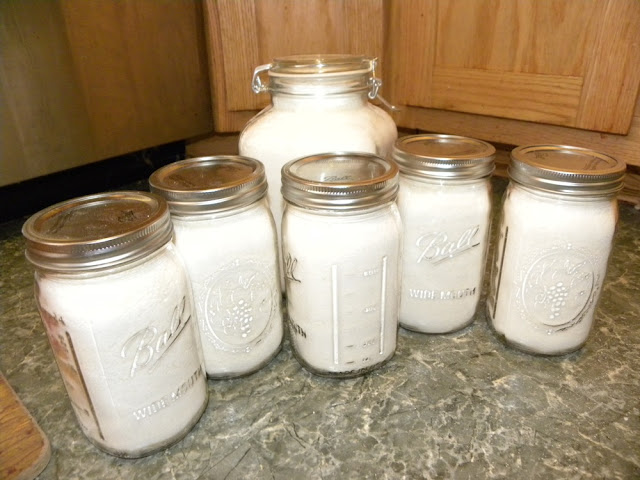 After the detergent was finished I figured I would continue to take advantage of Mae Bae's super long nap by trying a couple other recipes.  I used the lavender fabric softener recipe that I found here (that's what's in the clear jar) and the fabric spot treater recipe I found here (that's what are in the three blue containers, which I used after reading in the comment section that spray bottles had a tendency to get clogged): 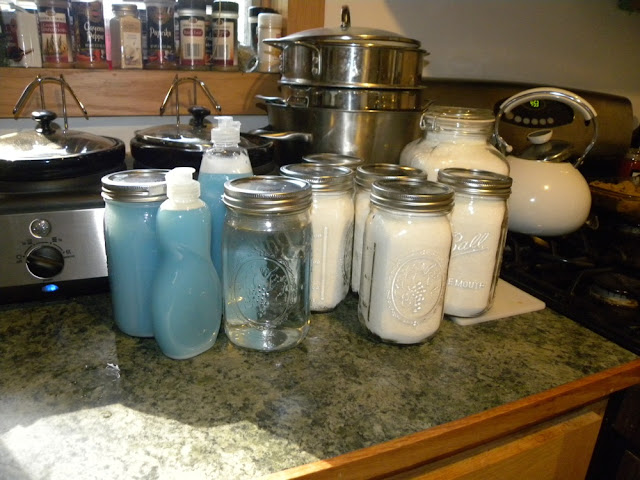 I'm pretty excited to try these out and see how they work for our family.

And I'm excited to try the other recipes that I have pinned for various other cleaning products.  I think I should be able to finish up making them in the next few days, so that I'm stocked up by the time the baby arrives...

Then I'll move on to my freezer cooking plans.

Oh yes, the nesting phase has begun...
Posted by Cammie Diane at 9:56 AM