The Last 24 Hours: Pregnancy News, A Possible VBAC and A Tumbling Class 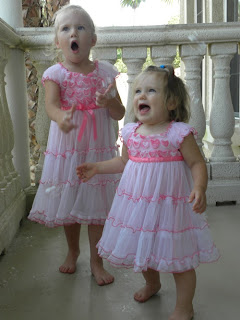 We've had a couple of exciting days.

Yesterday the girls went to their first tumbling classes.

I wrote an entire post about it, but it's currently in the "draft" bin because, well, the whole thing was a little embarassing.  Let's just say that Mae Bae was Mae Bae and for some reason I was shocked by this.  You see, in my imaginary world, Mae Bae loves tumbling so much at home that she was pleasant and cooperative at her class.  Instead she seemed to think she'd been entered into some sort of football/wrestling combo event and raced around the room.  She treated tumbling like a full contact sport, when not trying to hold hands with little boys that she'd just met.  After twenty minutes of trying to contain the Mae Bae-ness, she went outside with Daddy.

Sadie's class went well until the teacher said the word "race" (thankfully this was in the last five minutes) and she began trying to "get rid of" the competition (which she saw as the little boys in the class).  You could tell she knew what she was doing was naughty, because she kept looking over at me with this "I know I shouldn't be doing this but I just have to win" look on her face, while I tried to communicate that slamming into other people to win the "crab walk race" was not an appropriate activity.  Before she went to bed she said:  "I did good at the beginning of my class.  But I was bad at the end.  When we did the crab walk race I wanted to get rid of the boys."

Yeah.  That led to an interesting conversation.

Today, however, she's sick and cuddly, with an additional dose of cuddliness caused by the fact that the weather is suddenly turning towards autumn, and it's 66 degrees in our house.  Our two girls, after a year in Florida, think that 66 degrees is frigid, even with long pants and long sleeves on and would like to spend all their time wrapped in down blankets shivering.

We may need to invest in a space heater for the living room, so that we don't have to heat the whole house all day long.

In other news I met my OB today and was pretty happy with the entire appointment.  He was polite, lacked the condescension I've ran across so often and didn't scoff when I explained that I wanted to weigh the risk of future possible c-sections against  the risk of a VBAC right now.  He said that was an important consideration to make, and that since it's nationally recommended to try VBACs even after a second c-section (and after a discussion of the previous two labors and c-sections) he said he would be willing to let me try, although he would want me to head to the hospital early on in labor.

He wants me to come in weekly, to meet the other doctors in the practice, so weekly appointments start now.

The catch of the moment, is that the baby was breach at my last ultrasound and appears to be transverse now (although we've moved from breach to transverse in the last couple of days, so that seems to be a step in the right direction!).  If the baby is breach we can't try a VBAC, so I'm checking out Spinning Babies and any other info or suggestions I can find.  I go in for an ultrasound in eight days to give him a better idea of what's going on (and also because those four incidences of spotting make everyone want to make sure there aren't any problems at the moment).

In the last month I do seem to have lost a pound, which I'm guessing is from all the time we spent on the road, being disgusted at the idea of another fast food decision.

I'm pretty excited to even be given a chance at a natural birth.  After pushing for five hours without any pain killers I know that I can do this, if it's physically possible.  And having a doctor and hospital that actually is supportive and thinks that it's a good idea is pretty awesome.
Posted by Cammie Diane at 11:04 AM

Email ThisBlogThis!Share to TwitterShare to FacebookShare to Pinterest
Labels: day to day, Pregnancy