First off, thank you all so much for all the prayers, comments and messages that I have received in the last few days.  You guys are amazing and I can't even express how grateful I am for all the kind words we have received. I have felt buoyed by your prayers for us.  I don't even have words to express... so... Thank you so very much! 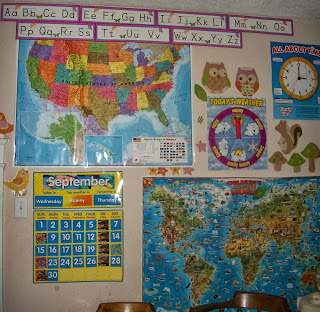 In our home Friday begins two days of negotiations with Sadie.  I almost feel like she's taking classes with her father sometimes (I heard a lot about his negotiations class last year):

Sadie:  "So when are we doing school today?"
Me:  "It's Friday.  We do field trips on Friday.  And no school on Saturday and Sunday."
Sadie:  "No school on Fridays?" (She knows this, oh how she knows this!  But she tries every Friday and Saturday to convince me otherwise!)
Me:  "No school on Fridays.  We're going on a field trip."
Sadie:  "I think we still need to do religion class" (or what she calls "original class" since that's what she thought I said the first time I told her we were doing our little faith class)
Me:
Sadie:  "It's good to read the Bible, Mommy.  I think we need to do our religion class and read about the saints.  We need to do it every day, Mommy."
Me:
Sadie:  "So... are we going to do math, Mommy?  I think we need to do math every day.  Let's get out the math book!"
Me:  "No!  No math until Monday!"

This is basically a version of a conversation we repeat every Friday and Saturday (by Sunday she's given up on me).  I guess the good thing is that the child is absolutely enthusiastic when she sees her math book after having been separated from it three long days. 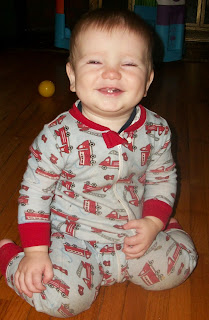 Patrick can now stand on his own (that is, without holding on to anything).  Maggie still holds the record for first steps at ten months and I'd be kind of surprised if he managed that since I'm thinking (hoping...) that walking is still a couple months away.

I have seen him use Maggie as a human walker.  Her little waist is the perfect height and he'll hold onto it and they'll do a little conga line across the living room with slow shuffling steps.  It definitely won't be too much longer now. 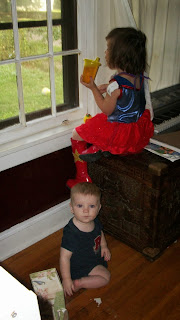 Patrick is all about Maggie, all the time.

He follows her from room to room, sitting where she sits, playing where she plays.  The drama comes when he wants to play with every single toy that she is playing with.

If she picks something up, he wants to be holding it.  He wants to be doing exactly what she's doing all the time.

And this is where she really amazes me.  If her older sister did the exact same thing there would be pinching. When Paul or I have to take away some small choke-hazard like thing that she's somehow acquired tears are inevitable. But Patrick has both of his sisters wrapped around his teeny tiny little finger and can apparently do no wrong.

I have a feeling that her little brother's constant attention and love are capable of doing amazing things!

Why, yes.  That would be a jelly fish costume... and more specifically a jelly fish costume that she talked up to Nani for months and months until one day it arrived in the mail (along with a pair of red boots and a dinosaur costume).  Sadie is going to be a jelly fish for Halloween.  It's one of those topics, along with volcanoes and planets and doing math on weekends, that she's passionate about at the moment:

Also in the mail for these incredibly spoiled bunnies?  A Tinkerbell Dress and a Periwinkle Dress for the girls.  Nani had explained to the girls several times that they were cotton dresses, not costumes, and the dresses arrived, each with a doll, to much fanfare (and there are Mae's new red boots!).  And yes, Nani made them: 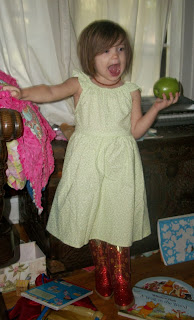 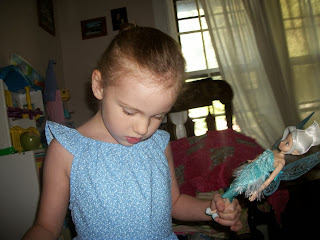 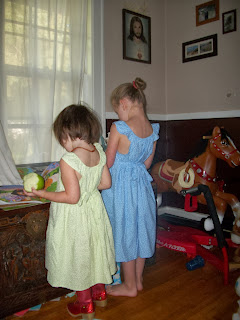 And actually, after looking at a calendar, I just realized that we met eight years ago today! 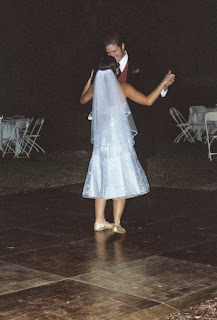 For more Quick Takes, visit Conversion Diary!
Posted by Cammie Diane at 10:14 AM