The Start of a New Diet 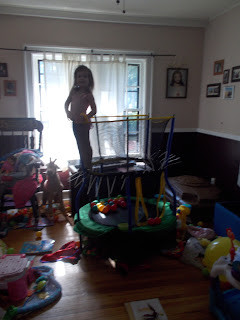 I'm feeling a little battered over here at the moment.  Between my back deciding to flare up for the first time in years and some sort of nasty flu bug that has been moving around our house and has finally hit me I have been stumbling through the last few days allowing the kids to watch way too much Netflix in the afternoons and trying to stay off my feet as much as possible.

We've also just jumped into the GAPS diet (full GAPS, I can't figure out how we would even try to do intro since Mae is not a fan of chicken broth... or soups textures at all).  It's not so bad and isn't nearly as scary as I thought it would be.  It's less of a challenge than the elimination diet was back in January, because I've done an incredibly restrictive diet once and I'm pretty good at GF baking now (with almond meal and coconut flour).

And the results of cutting out any and all gluten are already pretty amazing.  You see before this Mae wasn't having a ton of wheat.  She'd have a meal with wheat... maybe once a week.  And that would be something like a flour tortilla or something like that.  We're not allowing that at all anymore and the change?

Well this week the child who has about ten words and can go a month without using any of them said: "Red boots!" "Animal!"  "Bunny rabit!" "Bunny, bunny, bunny!"  "Mama!" "Baby!" and "Moon!"  So I'm beginning this new diet with cautious optimism.

This weekend I was hard at work making fermented foods...  my family is not rejoicing at the amount of cabbage that seems to be a new part of their diet, but lunch today was pretty funny (to me).

I'd been making chicken broth this morning and I moved some of the broth into a second pan and started making soup for lunch.  Lunch is the hardest in this brave new world without rice or most of the beans I'd usually use.  I added some of the extra carrots that I'd grated for sour kraut.  I threw in a diced onion and celery.  There was garlic.  I looked around.  The soup needed something more.  And then I saw it... half of a purple cabbage.  I diced it and threw it into the soup and watched as the broth turned bright purple. Then I hoped it would be good.  Just around that time Paul arrived home and we had this conversation:

A few minutes later from the other room:
Sadie (in a little voice):  "Daddy, this doesn't look very good."
Me: (coming into the room):  "It's Princess Sofia soup!  Did you see that it was purple? Of course it's going to be good."
Sadie: "Oh!" (looking unsure and then making a bravely polite face) "Yes, it looks good."

At this point I was really, really hoping that it would be good, because so far it had been too hot to taste.  Then everyone started to eat.  And guess what?  It actually was really good in all it's bright purple-ness.  They actually liked it!  Shockingly (to my family at least) it's something they would willingly eat again.

That's one step in the right direction.  And despite the flu we finished school for the day, so that's something else.  I figured canceling school usually causes discontent in the ranks anyways, so we might as well muscle on through.

Now to come up with a creative dinner... I know one thing: it's going to involve spaghetti squash!
Posted by Cammie Diane at 2:23 PM