I'm having major mouse related guilt right now.  And I don't even have a mouse body to justify it.

You see last night I came face to face with a mouse.  Now while that giant thing I saw in my kitchen
Sunday night didn't have me thinking twice about pulling out poison (or a shotgun), this little guy was tiny and cute (and disease laden and disgusting I'm sure).  His whole body looked smaller than the tail of that other thing...  He was sniffing around the spot where the muffins I'd made earlier in the day had been sitting, after deftly sidestepping the rat poison box that I'd positioned right in front of the oven (where they seem to come in... maybe this weekend I can get Paul to move it and see if there's an opening...).  He saw me and fled back behind the oven (without the swagger that other night time visitor, I might note).

Here's a comparison.  Remember how the other animal looked like this: 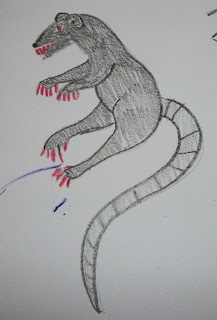 Well this guy looked more like this (only maybe a tiny bit more helpless looking):


This morning Paul and I brought the kids downstairs and he was on the kitchen counter.  Paul turned on the lights and he didn't flee.  He was jumping around while Paul stood in the doorway:

Paul decided not to acknowledge my crazy talk as I wandered back into the living room saying things like: "I'm a mouse murderer.  I murdered a mouse."  While Sadie looked serious and said "You murdered a mouse, Mommy?"