So I can't really do What I Wore Sunday today because I didn't get out of my pajamas.  It was close.  I almost did.  I was on the phone with the doctor's answering service getting ready for the doctor to send me to the ER, which they almost did yesterday, because Maggie has been one sick little bunny.

I didn't blog yesterday because I couldn't think of anything to write.  I was too busy worrying about her.

Yesterday they doubled her prescription and said I could take her to the ER right then, or wait until this afternoon.  After a rough night I knew we couldn't go to Mass and so I waited and watched her and waited some more.  We hit the 50 mark in My Little Pony episodes, and Sadie declared that she was Pinkie Pie, Mae was Apple Jack (because Apple Jack knocks apples out of trees and Maggie knocks down brick towers) and that I could be Rainbow Dash.  Patrick had to be a Timber Wolf (which was a scary monster in an episode they saw today)... This followed: 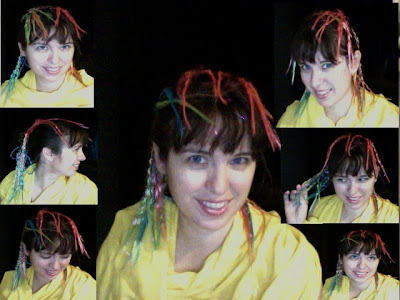 And it was totally worth it because it got Maggie to laugh...

But I should really start at the beginning.

You see, this week I made a miscalculation.

I thought I had it all figured out.  Maggie and Sadie have both had mild eczema and both of them haven't since we cut out milk.  So milk was the problem, right?  All my kids have some sort of milk related issues, right?

While I do think milk is an issue here, apparently it's not the only issue...

We were running low on groceries, and hadn't made it to the store and at the start of this week I looked around the kitchen and saw the wheat flour that I still had and said, "Why not? No one's actually allergic to it..." and I baked a beautiful loaf of bread.  It was so tasty... The kids devoured it.

And then Maggie got sick.  Screaming in the middle of the night sick.  It lasted for two days.

On Wednesday I took her to the doctor and she ordered a celiac test and allergy blood work.  But Mae wasn't getting better.  She was lying by the window staring out all day long.  Since the kid has a freakishly high pain tolerance this made me nervous.

One of the side effects of (what they think is) celiacs meant a prescription was written and we waited and waited for the thing to happen that needed to happen for Maggie to not be sick anymore (ie, not having wheat in her body).  And it didn't happen... for eight days.

Yesterday I asked for prayers and a lot of people were praying for us.  When nothing had happened by morning I knew we couldn't leave the house for Mass.  It would have been risking disaster.

This afternoon as I was on the phone, getting ready for what I was expecting to be one of the worst ER visits in the history of our family, it finally happened.  And she is feeling much, much better now that she's wheat-free.

For the first time in a week she's dancing around the living room.  She's jumping up and down smiling.

And wheat... is definitely not an option for her anymore...  even a teeny tiny little bit.
Posted by Cammie Diane at 4:49 PM