What I Wore Sunday: These Kids Are Wild Edition

Oh my goodness.  Or as Sadie said today when she saw a bunch of fairy socks at Walmart today "Oh my jingle bells."

These children (see I'm not even forming complete thoughts in the aftermath).  They were a handful at Mass today.  I will say that we made it to the consecration.  I won't say much else beyond that.  Except that I have a new plan of attack for our weekends.  Paul and I have agreed that one of us will be going to Mass on Saturday nights and one of us will be going on Sunday nights and then, on Sunday mornings when my back doesn't feel like I have a ruptured disk in it (which is thankfully most of the time these days, at least when I don't totally over do like I did this week) I'll try to take all three by myself.  Because tonight re-demonstrated why we only take Maggie and Patrick to the 9am Mass.  It is the only Mass that they can even vaguely do well at.

At least this is only for a  year (or less).  Which is what I'm sure I'll be telling myself on every weekend from now until that year is up.

But I figure that if I go the night before (or have the opportunity to go later in the day) we can go in the morning and try to make it through the entire hour and a half (it was an hour already when we left right after the consecration when I just couldn't take the naughtiness anymore) and if we don't make it all the way through I still can take Sadie (or have already gone with her).  Because Maggie and Patrick together, they are all kinds of crazy.

And you won't even guess who the crazy one was tonight.  If you read this blog a lot you probably would have guessed Mae Bae.  And while Mae wasn't at her best... she definitely wasn't the wildest child in our family.

Let's just say that on most days the word to best describe Patrick would be "boisterous."  Or on days like today maybe "belligerent."

I seriously think he's going to more than give Maggie a run for her money because he's already making an effort to get into just as much mischief as his big sister!

And now, on to what I actually wore for this What I Wore Sunday post.

I'll start with the kids;  Sadie would like everyone to know that she was dressed as Periwinkle from The Secret of the Wings (a Tinkerbell movie) because she was wearing blue and white and I told her the buttons looked like they were made of ice (okay, so you have to use a lot of imagination for that one).  Maggie is wearing a dress with her red super hero boots (of course).  And Patrick wore a t-shirt and khakis.

And here the kids are posing with me, in fine form: 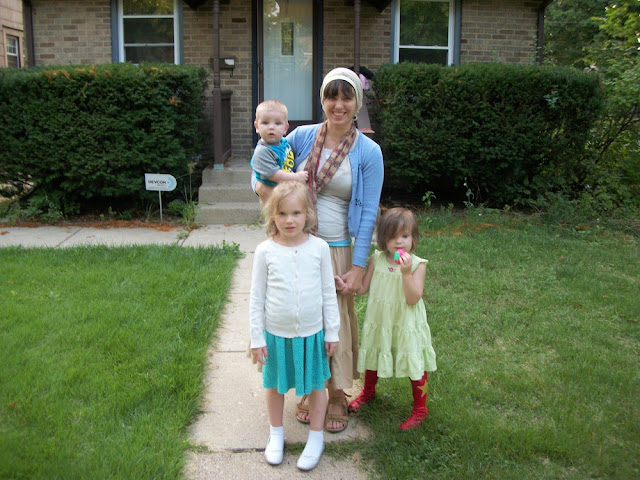 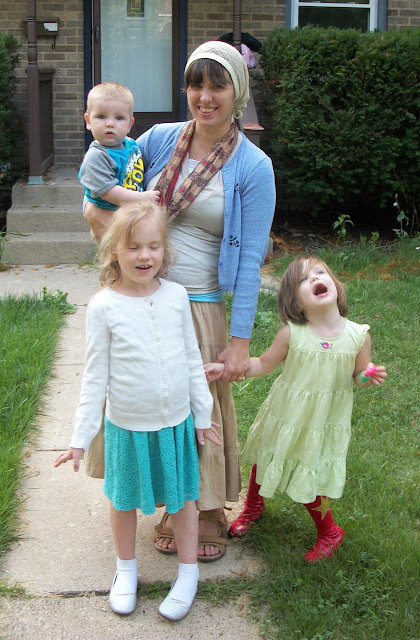 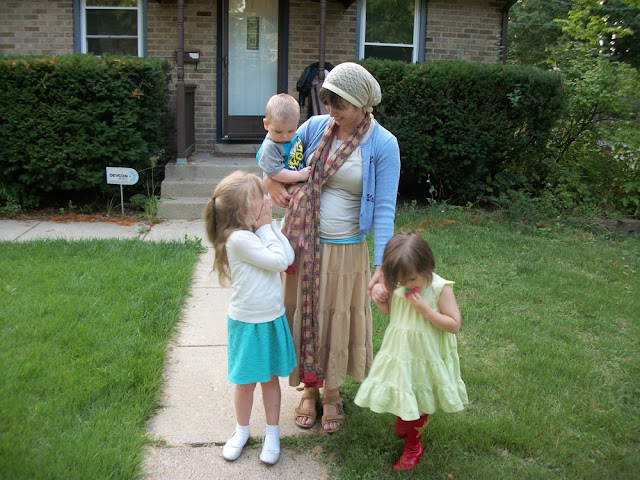 For more WIWS head over to FLAP!
Posted by Cammie Diane at 10:03 PM