Yesterday I woke up and wanted to do something a little different.  We're already in Week 15 of school over here and I thought "wouldn't it be fun to do something totally different this week... we could get out of the house... let's do an entire week of field trips."

Now I'll admit, it may be because autumn has arrived and there's a chill in the air and it feels wonderful to get bundled up and go outside.  And I can also see the long days of winter in he near future keeping us inside more and more with it's frosty chill.

So I announced the plan and bundled everyone up and asked Sadie where she wanted to go for her first field trip.  "The botanical gardens!" she said quickly.  "Okay," I replied, "but I want you to know that we can go back to the science center if you want to.  It's up to you.  We can do one today and one on one of the other days."  "Science center!" she said, jumping up and down.

And so I loaded Patrick and Maggie into the stroller (because the science center is a bit further than Petco and I wasn't feeling up to carrying Patrick quite that far) and walked the 1.6 miles there with Sadie trotting along beside me talking about everything we saw along the way.  And then we got there. And the parking lot was empty.  Great, I thought, we'll have the whole place to ourselves.

And then we saw this: 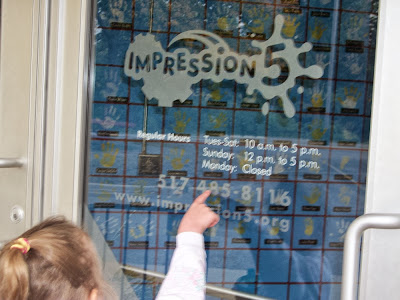 That would be "Monday: Closed" since the picture is a little bit blurry.

The kids looked at me like: "Why aren't you opening the door?" and I explained that it was closed and that we'd have to do something else, but I could tell that the idea of walking that far and then turning back towards home (or the botanical gardens which were now four miles in the opposite direction) would not go over well. I also sensed that the state capital or supreme court buildings would not be seen as comparable to the science center where they could run and build and smash down smushy brick walls.

Then I saw it: 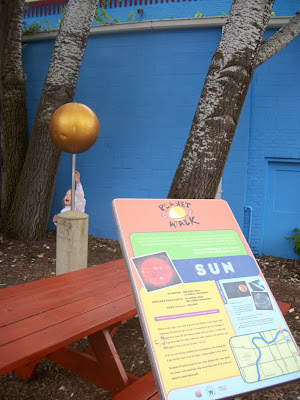 "Look!"  I said, grasping at straws.  "There's a planet walk!  And look!  It's to scale!  So there's the sun!" I glanced at the map, "and the other planets are on the river trail... between here and the zoo!"  Two miles away, I added, in my head.  They're all the same size and distance to scale that they'd be from the sun (we spent a huge amount of time talking about "to scale" in the time that followed).

The field trip was saved.  We set off.  The first four planets were all quite close: 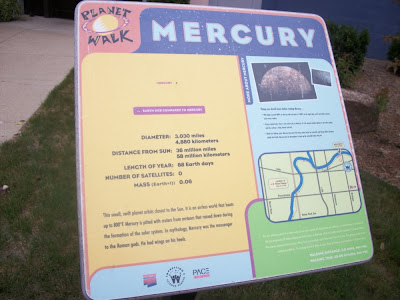 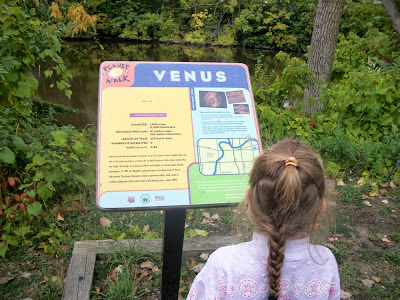 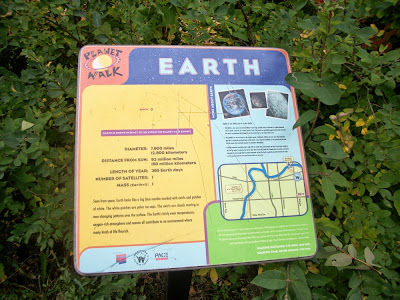 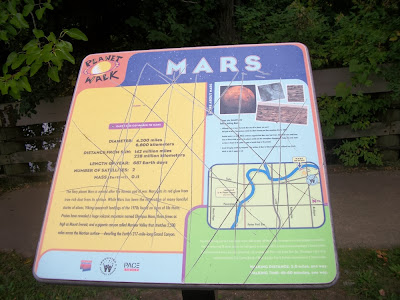 Between Earth and Mars we rescued a crawdad that had somehow gotten out of the river and up onto the river trail and were heckled by a squirrel who thought we passed to close to his tree.  And then we were off on our two mile trek to find the other planets: 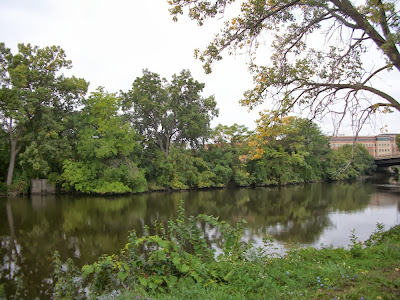 The leaves on the trail are not yet cooperating with my dreams of autumn. 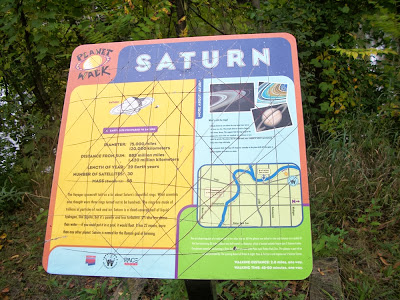 But there was shock over how long we had to walk before we got to Uranus: 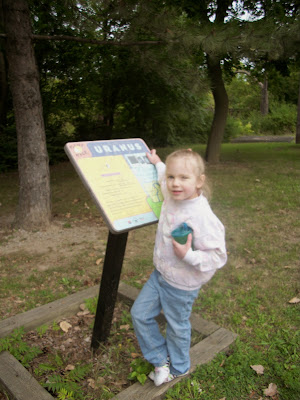 The walk was a study in contrasts... we walked by a fisherman on the scenic river trail and also went past empty industrial plants that were eerily silent. 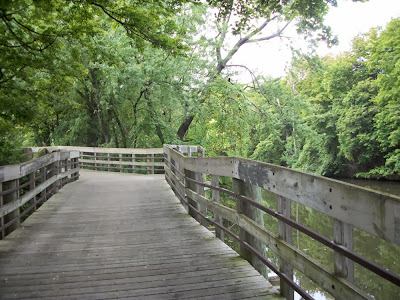 She was thrilled when we finally came to Neptune: 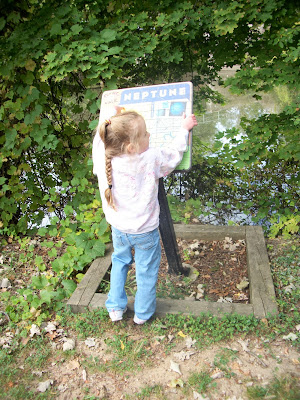 But then the fretting began.  What if they'd taken down Pluto when they decided it wasn't a planet anymore.  Poor Pluto... without a sign... Still we trudged along: 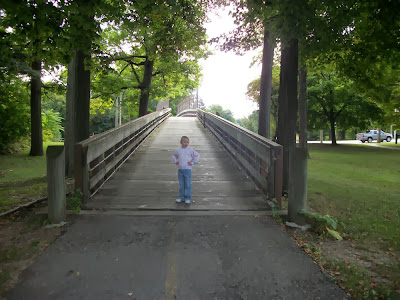 After walking 3.6 miles she was pretty worn out.  But we pushed on the last few steps and then: 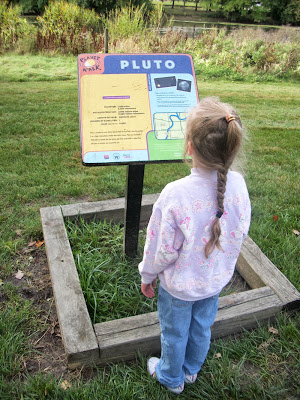 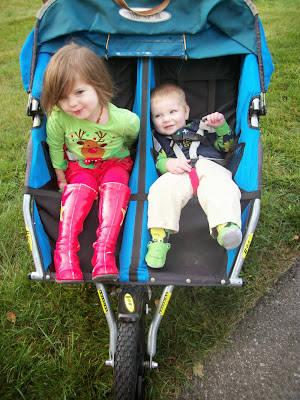 We'd done it!  The field trip had been saved from Mommy's lack of planning!  And there was more.  We were at the zoo just in time to visit the fish: 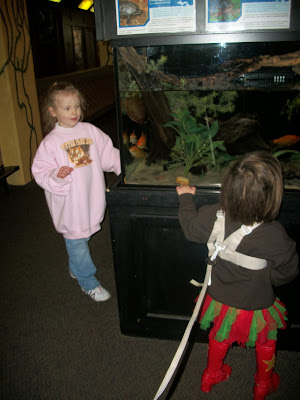 Sadie was interviewed on camera by a student for a class about the zoo (Maggie tried to steal her microphone) and then got into a conversation with one of the zoo keepers and the park security that had me laughing:

Park Security Guard (as we watched the tamarins):  "So what's your favorite animal?"
Sadie:  "The peacocks."
PSG:  "You know, most kids do say the peacocks!"
Sadie:  "And my sister's is that animal that always follows us around."
Me:  "The peacocks?"
Sadie:  "No. The one that follows us around."
Me:  "The baby bongo that came over to see her that time?"
PSG:  "Bella?"
Sadie:  "No, no, no.  The one that tries to hit her and attack her."
Everyone:
Me (realizing what she's talking about and feeling the need to elaborate...):  "Oh, in the monkey house.  Through the glass.  There was a monkey that was following her behind the glass and it kept trying to attack her through the glass."
Zoo Keeper:  "Was it the mandrill?"
Me:  "Yup."
ZK:  "Which one was it?"
Me:  "Not the biggest one or the littlest one."
ZK:  (they were both nodding in a not surprised way):  That would be the female.  Her name's Susannah."

So Sadie thinks Susannah the attacking mandrill is Maggie's favorite animal at the zoo... I think I would have to say it's the over sized feeder fish in the turtle tank...

Then we walked around the zoo until Paul got out of class and rescued us from the two mile walk home. 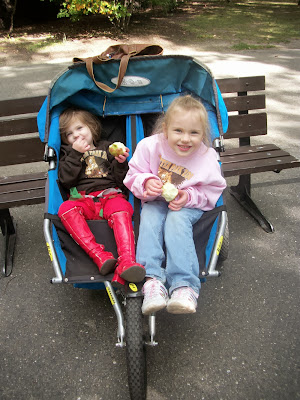 And that was the first day of our Week o' Field Trips!  I'd call it a success.

When we got home Sadie requested her math, reading and writing assignments, informing me that "these things are important" especially since she wants to be "a nun" and something about getting to go to the convent early if she studies really hard... So we actually almost did a full school day after we got home...

Now to get going on the big day ahead of us... Mae and I are about to leave for another round of testing.  Prayers are appreciated!