Fairies, Sock Monkeys and Other Dreams of Halloween 2013

So the costume catalog people have got our number.... or to be more accurate, our mailing address.  They know that we have a costume obsessed daughter and I think that they may have figured out that if they send her catalogs they'll keep getting orders from a grandma on the other side of the country for costumes that she just. can't. live. without.

At least around Halloween and her birthday that is.  And possibly Christmas too.

If Maggie passion is shoes then Sadie's is playing dress up.

Of course I was unusually enthusiastic when I saw the catalog too this time.  My face lit up.  I might have danced around.  "You guys!"  I said.  "YOU GUYS!"  And when I had their attention I held up the catalog and said:  "LOOK at THIS!  We could be sock monkeys.  All of us.  A little sock monkey family!  How cool would that be!"

And so you can appreciate the cool-ness, here: 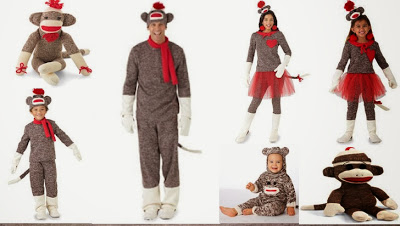 I didn't even mean for this year.  I meant for someday.  Because it's not like we're going to be buying $500 of sock monkey outfits anytime soon.  But a girl can dream, right?

Apparently not in this house.

Because instead of appreciating the wonderful-ness of the sock monkey family they were all like:  "What's wrong with you, no way."  Especially the tall male sock monkey.  He was adamant in his wrongness.

So, now that my lil' family of sock monkey dream was ripped into sock monkey shreds Sadie got in on the action and started trying to come up with family costume ideas.  And I think Paul might agree that her ideas make my sock monkeys look pretty awesome: 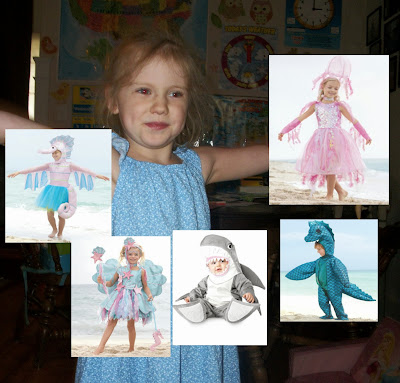 Because that would be Sadie as the jelly fish, Maggie as a sea horse (yeah, I'd like to see someone try to put her into that thing), me as the sea fairy, Patrick as the shark... oh and look there you are Sweetie as... the Loch Ness monster. I think you might have been able to negotiate to be a sea dragon or a lobster but... not much else.  Sock monkeys are looking pretty neat now, aren't they? 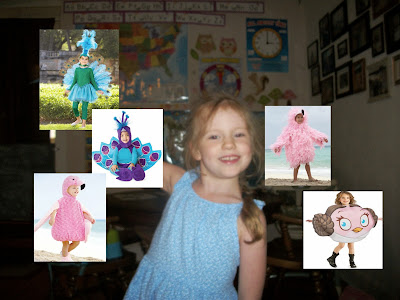 Of course her other passion of the moment, which nearly equals the jelly fish obsession is her peacock obsession.  She could be a peacock and Patrick could be the baby peacock... and maybe Maggie could be that chubby flamingo and I could be the fluffy flamingo... and Daddy could be an angry bird or something like that... looks it's even a Star Wars Angry Bird... that might come close to the sock monkey in coolness... almost.

Then she saw the fairy pictures.  These almost surpassed the Jelly Fish costume: 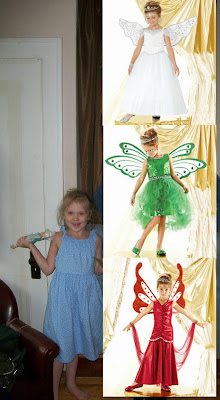 She announced she would be the white frost fairy. Maggie could be the green Tinker Bell fairy.  And I could be the red fairy. "What would Patrick be?"  I asked.

Perhaps I shouldn't have asked.  "He can be the blue one..." she said generously.  Because blue is a boy color... or something like that.

I didn't ask what Daddy would have to be in this plan (you're welcome Paul): 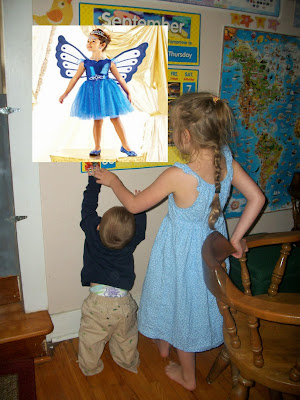 So that is the costume craziness in our house at the moment (at least the imagined craziness from spending way too much time looking at the catalogs while Sadie dreamed a loud of a house filled with people in costumes)!

All the costume pictures in this post are from the Chasing Fireflies website... Sadie's dream catalog
Posted by Cammie Diane at 10:13 PM