Bedtime Struggles and a New Strategy 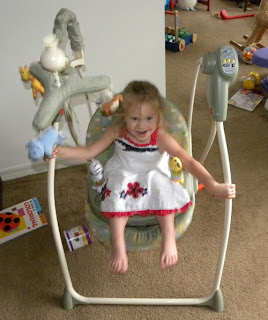 We've been having bedtime struggles withe Mae Bae and Sadie lately that basically go something like this.  At 9pm Sadie wakes up after two hours of sleep and demands to sleep: "In Mommy's Big Bed!"  Mae Bae wakes up at 10pm, sleeps in said Big Bed until 12am and then stands up and begins to try to climb the headboard.  After several times being thwarted at her headboard plan she'll then demand to go back to her crib, where she'll sleep for a few hours, or for the rest of the night (which is totally new as of this week and is rather nice).  Our strategy of letting them come over into the Big Bed clearly was not working out well for us.  So last night I decided to try something a little different.  After all, even a king sized bed can get crowded with four people in it.

When Mae cried for the first time I went over and gave her a binky and got her back to sleep and then laid down in Mae's Big Girl Bed and waited.  Fifteen minutes later when she woke up again I nursed her (before the cries could wake her sister) and after letting her lay in her big bed for a little while, put her back in her crib.

I checked the time because it felt like morning and found that it was 2am.

I soothed Sadie back to sleep in her own bed by talking to her from across the room and going over to cuddle with her once or twice (it's all a sleepy blur) when she started to cry.  Our biggest problem is that the girls room faces the noisiest part of the apartment complex and is noisy all night long with doors slamming and people talking.

Sometime around morning Mae Bae started to cry and I brought her back into her big bed and nursed her again.  We ended up night weaning Sadie at around 18 months... so I see that day as a glimmer way off on the horizon.  I'm hoping Mae might night wean herself a little earlier since she is a better sleeper than her sister was at this age (Sadie literally nursed every hour at a year old, all night long).

When Sadie woke up and saw Mae Bae by herself in her big bed surrounded by stuffed animals, she was a proud big sister.  As we walked out into the living room she said:

"Good job Mae Bae!" and then later when Daddy came out and I told him about our sleep time adventure she said:  "Mae Bae slept in her Big Girl Bed!  Good job Mae Bae!  I am so proud of you!"

My dream is that in the next few months we get them to both sleep in their beds through the night... I wonder if it will actually happen...
Posted by Cammie Diane at 7:36 AM