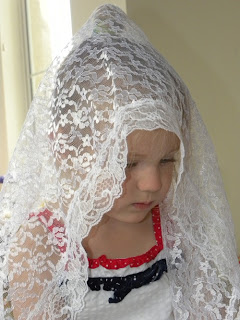 Sadie has been full of cute quotes lately.  Yesterday afternoon she picked up a big heavy quilt and draped it over her head before telling me that she was getting married.  Later she announced the groom's identity.  She said she was going to be marrying "Baby Jesus."  When I asked her who she said: "God!"

When I asked her to tell Daddy who she was planning on marrying though, she was a bit embarrassed and wouldn't say a word.

And then there was the (thankfully) small whisper at Mass when the priest held the Eucharist up and I barely heard her on my lap say: "I want to eat it!"

She then knelt next to Paul and made the sign of the cross three times, folded her hands and announced (in a much louder voice): "I did it!"  Thankfully we'd already retreated to the narthex at that point.
Posted by Cammie Diane at 6:47 AM