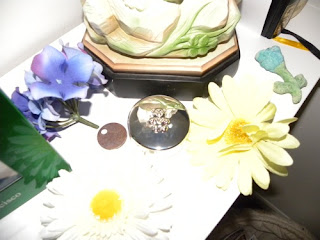 On Sunday, September 11th, we received a call we'd been expecting for a little while.  It was from the Fuller Funeral Home and they said that our little one's cremated remains were ready for pick up.

When Paul first arrived at Fuller Funeral Home he was in a state of shock.  He's just gone to the pathology lab where the first person he'd met had acted like his request for the body was disgusting and impossible, followed by an apologetic man who'd handed him the baby in an old taped up cardboard box.  Since he was home with the girls and we didn't yet know anyone at the school well enough to ask them to come over, he hadn't been able to be at the hospital with me that difficult night.  As a result I think it really became real for him the next day when he retrieved the body.

At Fuller Funeral Home he was treated with kindness immediately upon his arrival, something that, after the past experiences at the hospital we were both incredibly grateful for.  He was told that the normal cost for cremation services and urn would be waived (that would be around two thousand dollars) and they helped him pick out a beautiful silver box with a teddy bear, that actually came inside of a bear called a "comfort cub." 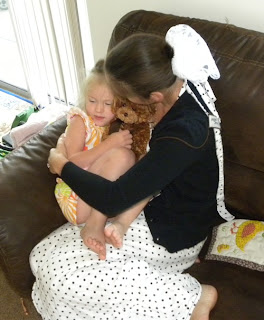 We'd actually chosen this particular funeral home because they advertised in the bulletin at the parish we attended that week and said that they offered "traditional Catholic" services.  We hoped that meant that they were familiar with this type of thing, since the hospital was acting as though it was bizarre.  The chance choice, based on the bulletin, ended up being a good one, because we were treated with respect and kindness during the entire, difficult, time.

I stayed home with the girls after Paul got the call that the urn that he'd picked out had arrived and that he could come pick up the remains.  He returned home a while later with a beautiful teddy bear urn, a teddy bear that girls have since confiscated (without the urn inside), the chip that gives the cremation information, and a certificate of cremation.

We will have take the urn to holy ground eventually.  First we just have to work out where that's going to be.  I'd really like it to be the parish where we were married and where the girls were baptized, but we'll have to wait and see.

After what happened at the hospital, Paul and I were both a little "gun shy" I guess you could say.  The default expectation was set for something horrible to happen at every step.  And I am incredibly grateful that the funeral home took that away with their generosity when we were still reeling from our experience.  I hope they realize how much their kindness touched our lives during the past weeks... and restored some of my faith in people again after the hospital debacle.
Posted by Cammie Diane at 7:36 AM