Sadie and the Veil 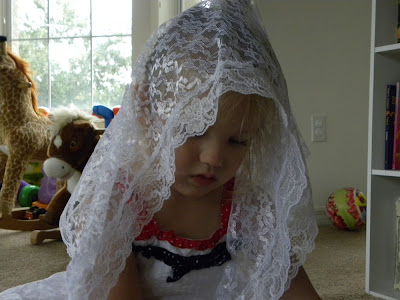 I bought this veil for Sadie years ago (I think it was when I was pregnant with Mae) and she discovered it, still in it's box, while we were moving.  Yesterday I let her see it for a few minutes before putting it away, into the basket I've designated for headcoverings.  Cuteness ensued. 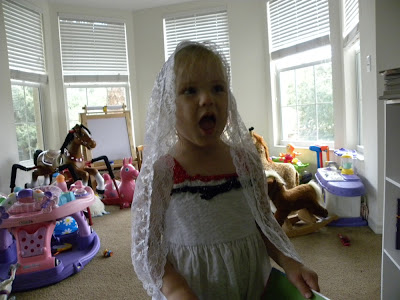 After downloading the pictures however, I had to pause... a headcovering post... what kind of insanity would follow (maybe I'm a little gun-shy after the last headcovering series post/incident, which ended with a blog post on another site that twisted my words.... with people saying they were going to come over to my blog to "draw blood..." although no one actually did...)?

Am I really up for the insanity at this point (it has been a rather tough month...) all because I posted a few cute pictures of my kid in a chapel veil?  Do I feel like I could charitably field questions from people who apparently have never been around a toddler girl for any extended period of time?  Questions that, despite being typed, have a certain tone: 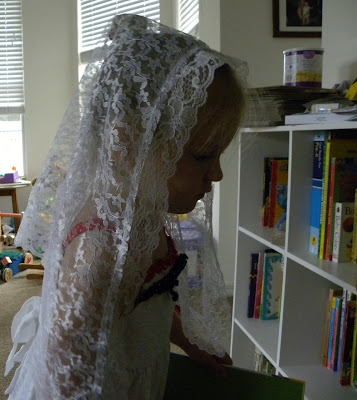 Then I thought: Maybe I'll just answer those questions in advance.  Nip it in the bud, so to speak.

This is my three year old daughter.  She found this veil, which I bought her a couple of years ago, and hadn't planned on giving to her for a few more years (maybe around her first communion?) in a box when we were moving.  It was love at first sight.  Mommy has veils.  Mommy wears dresses.  She wants to be like Mommy still.  No dark ulterior motives here.  It's not a commentary on modesty in toddlers (trying not to roll my eyes...).  In our house, at this point, "modesty" for toddlers pretty much involves the occasional question of "Do ladies sit like that?" that comes up because she does insist on wearing dresses, pretty much all the time.

And I took pictures because I'm her mom and I thought she looked pretty cute.

I hope, despite the lengthy explanation that I felt might (or might not) be necessary didn't ruin all the cuteness!  I just didn't feel up for a headcovering controversy this morning when I was posting something lighthearted! 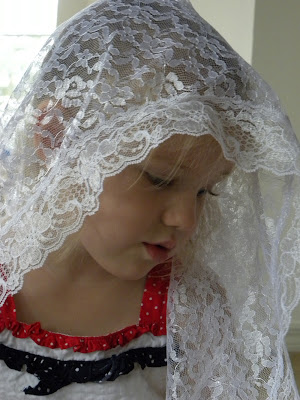 And now... for a blast from the past... This is a picture of Sadie, the Veil Swiper, when the Bishop visited our little parish in Northern California. She'd stolen my veil and wore it for a little while. 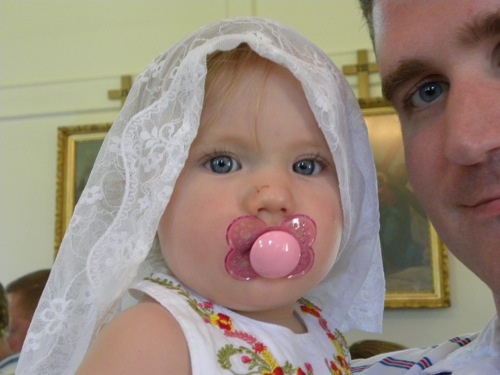 I hope you've enjoyed the headcovering cuteness today!
Posted by Cammie Diane at 8:44 AM