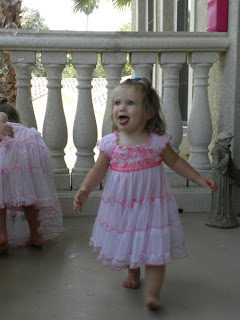 Mae Bae has become a babbler, letting everyone know her opinion in a nearly non-stop flow of exclamations and single syllable statements.  One of her favorites is "Ho Ba!"

The first time I realized she was actually trying to say something as she repeated "Ho Ba" excitedly, we were in the parking lot at Walmart and she kept pointing to the store over and over again, repeating the "words."    Later in the day the meaning of her words suddenly popped into my head, which must have been unconsciously working on deciphering the baby phrase: "So big!"

Usually when we go in Walmart she gets antsy, and I end up saying "How big is Mae Bae, so big, so big" while moving her hands and trying to maneuver a cart with my elbows.

This morning, after an (super) early morning trip over to Mommy and Daddy's room I caught Mae Bae attempting to jump on top of her sleeping sister, while yelling repeatedly "Ho ba!" like some sort of war cry... I pulled the giggling baby off her sister and let Sadie sleep for another hour.

When Sadie came out of the room much later, her eyes still sleepy and confused one of the first things she said was:  "Mae Bae says 'so big' Mommy."  So our baby translator had confirmed our interpretation.  When I asked:  "Is that what Mae Bae means when she says "ho ba?"" Sadie nodded and said "Yeah."

I have a feeling she's going to be a talker... and that once she really starts making words, she may never stop, for anyone else in the house to get a word in!
Posted by Cammie Diane at 10:59 AM