If you were on facebook yesterday, and you like this blog, there's a good chance that you witnessed the beginning of the bear drama that began to unfold at about 9 am, when the girls and I were playing out on the porch.  For those of you who missed it, here's the recap (and an update!):

The girls were playing "New Hampshire", the game in which Sadie pretends that we're visiting her buddy in New Hampshire and makes us all go in a train across the country.  She'd convinced Mae to spend a solid ten minutes inside one of those play tunnels, which Sadie says is the "motel" that we're staying in on the trip.  I was standing nearby when I heard a huge sigh off to my right.

I turned and stared into the forest.  It reminded me of the sound the horses make when there's a bear or mountain lion nearby, but the horses are on the opposite side of the property and this was definitely coming from the forest.  After a few moments of silence I started to wonder if I'd imagined the sound and went back to making sure no one got stuck in the tunnel (Mae tries to sit up in it).

Fifteen minutes later, Grumpa came inside and said that the horses were acting like there was a bear around.  About five minutes after that Nini called (they live next door) and said that the bear had just destroyed their garage, which has accidentally been left open.

So I guess it really was a bear.

And he was close enough that I could hear him breathing...

A new update came in today when my dad ran into a neighbor whose husband spotted a bear up the driveway last night.  Unfortunately it was a baby bear, so I'm guessing I heard Mama bear yesterday.  We're now sticking close to home when we're outside.  No long walks right now... and lots of playing on the porch. 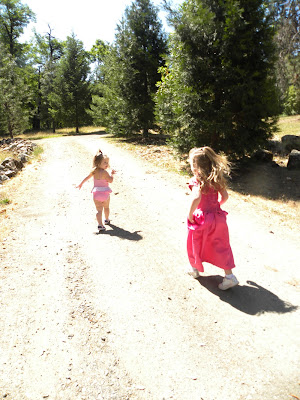 You'd think that I'd be done sewing princess dresses at the moment, wouldn't you?  And yet nap time around and after I finished machine sewing today's snoods I moved right on into sewing a princess dress in bright pink.  So yeah.

We now have Princess Dress #2.

Sadie burst in the room when I was halfway through sewing.  She does this at nap time, when she knows there's a chance that I'll be working on birthday projects.  She froze, stared at the pink fabric and declared that she loves it. 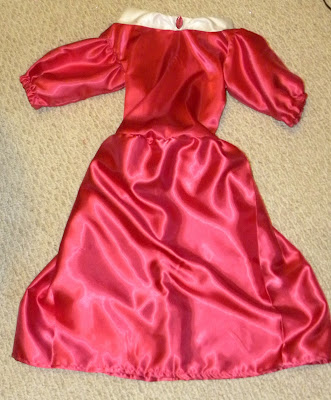 Before Sadie's recent obsession with pink she was going through a purple phase.  When we started our trip everything had to be "Rapunzel" and so I designed a "Rapunzel" rosary and necklace...  Then purple was out and pink was in.

Oh well.  By next week purple might be back in again.  Here are the rosary and necklace I made to go with the purple princess dress that I thankfully, didn't make: 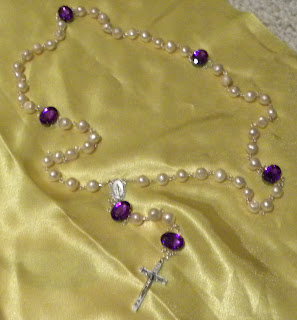 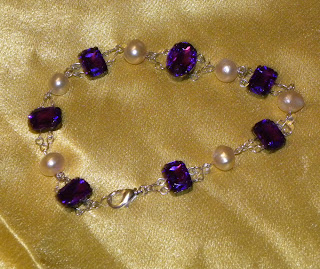 Paul and I went to the movies for the first time in... years.  When we discussed it the last movie we could remember seeing together was the last Indiana Jones movie... and when was that?  2008?  I think I was still pregnant with Sadie.

We went to see Promethius because our choices were that or Men in Black III (a step up from last weeks What to Expect When Your Expecting, which I couldn't force myself to see, even if it did mean a "date night.").  And as a general rule, action/adventure movies are among my favorites.

I feel like I actually walked out of the theater a little dumber than I was when I walked in.  I could write 7 Quick Takes on all the reasons why the movie isn't worth seeing, but that would involve putting way too much additional thought into a movie I would really rather forget.

And I'd really like to forget it (Paul agreed with the thumbs down assessment).

Paul got to ride on a small plane to get to work today at a distant court house.  I think he might have the coolest internship ever.

Bubble wands are driving me crazy.  Mae Bae is something of a bubble wand tyrant and follows me around with them, squealing if an appropriate number of bubbles aren't forthcoming.

I keep hiding them and she keeps finding them. 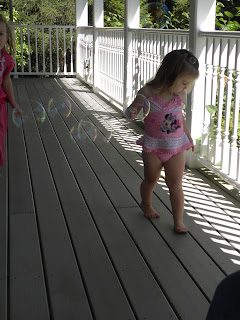 
For more Quick Takes, visit Conversion Diary!
Posted by Cammie Diane at 1:04 AM