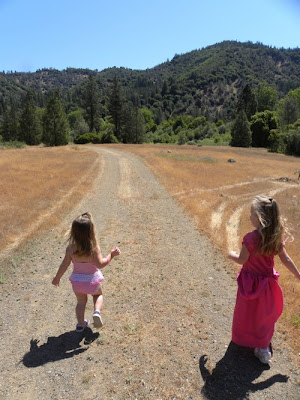 Mae Bae has entered what shall henceforth be known as "the clothes phase."  I have a feeling it might be a rather long phase, however, after spending nearly four years with her sister, and am not expecting her to emerge back to sanity any time soon.

Warning signs for the start of the phase had been pretty apparent these past months.  She was obsessed with shoes (everyone's shoes, but particularly shiny shoes and of the shiny shoes especially shiny red shoes...).  She would quickly dissolve in tears if I didn't cram her feet into the shoe of choice at any given moment, or if, horror of horrors, the chosen shoe that she'd somehow dug out of the back of the closet that was two sizes two small, didn't fit.

Then there were the purses.  She repeatedly found and old orange beach bag with a stenciled girl on the front that says something like "All Day I Dream of Surfing" and began lugging it around the house.  It didn't matter that the bag was bigger than she was, or that it dragged on the ground behind her.

So it was only a matter of time before the accessory obsession moved on to clothes.  But... I can no longer deny that the day has arrived.  And it has arrived in all it's swirling pink lace and satin ruffled glory. 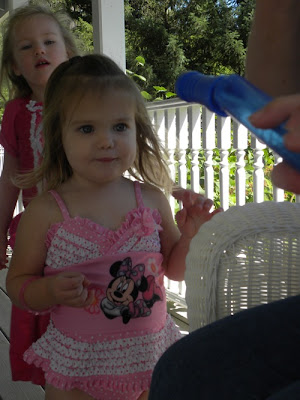 The clothes portion began with a pink and white polka dot bathing suit, which, somewhere around Tucson, Arizona, she decided was the only thing in the kid clothes bag that she could possibly wear.  It has developed into a refusal to wear her pajamas to bed, and an insistence on wearing one of her sister's pink princess nightgowns, which, unlike her own nightgowns (which are for the most part identical, but are size threes instead of size sixes), come down to the floor and are perfect for dancing in, if one doesn't mind occasionally tripping over the hem.

She twirls and stops and looks down with a smile at her skirt.  If a drop of water touches her outfit, she screams and runs to me, trying to remove the offending piece of clothing to replace it with another (that can make eating out fun... and it makes swimming awkward...).  Or she insists on wearing her bathing suit when it's 50 degrees out in the morning (which is cold for us after year in Florida) and then has a melt down if we suggest she changes before we go on a morning walk.  I'm choosing my battles.

Yes, we've entered a fun new phase with Mae Bae.  No more pajama pants.  I think that age of dresses has arrived a little bit sooner with Mae than it did with Sadie... but I guess that's what happens when you're getting your fashion tips from your four year old sister!
Posted by Cammie Diane at 11:07 AM