This is a repost from January 2011. I'm posting it in celebration of Corpus Christi Sunday! 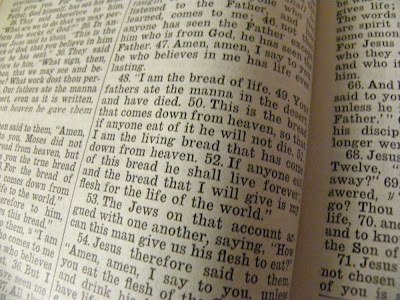 When I first began to learn about Catholicism, I had already agreed to become Catholic. I’d begun to pray around a year earlier (after a long while of not praying) and while the prayers I said felt forced and brittle, I kept on. It was after about eight months of this sort of prayer that I met my future husband and we began to discuss going to church together. My husband-to-be hadn’t been to Mass regularly in a while, but he was adamantly Catholic, and thus began my journey towards being received into the Church.

The Mass and many of the Church’s teachings were certainly foreign to me. Yet at the same time certain verses that I must have read many times in the past, began to jump off the page. Answers formed to questions that had nagged at me for years. And I wondered how I could have missed them. How could I have read these same words for years and basically, for lack of a better way of describing it, missed the point?

Apostolic Succession and the Eucharist were two of the main points that transformed the way I thought. I went from thinking: “I’ll go to this Church because my fiancé was raised in it and wants to raise our children in it” to thinking, “I am so incredibly fortunate and blessed to have found my way Home.”

Since these two first points, which are really starting points, could fill volumes (and have over the centuries) I’ll just begin to tackle one of them in this post. It is the sacrament you find at the center of Catholic life: the Eucharist.

Now the fact that the Eucharist is the actual body and blood of our Lord is very odd (at best) to non-Catholics. You will often hear the argument: “well He didn’t mean that literally” in discussions about transubstantiation and the Body and Blood of Christ.

However, it is perfectly clear in John Chapter 6 that he very much did mean it literally. Let’s take a look, starting with verse 47:

The Jews quarreled among themselves, saying, "How can this man give us (his) flesh to eat?"

Jesus said to them, "Amen, amen, I say to you, unless you eat the flesh of the Son of Man and drink his blood, you do not have life within you. Whoever eats my flesh and drinks my blood has eternal life, and I will raise him on the last day. For my flesh is true food, and my blood is true drink.

These things he said while teaching in the synagogue in Capernaum. Then many of his disciples who were listening said, "This saying is hard; who can accept it?"

Since Jesus knew that his disciples were murmuring about this, he said to them, "Does this shock you? What if you were to see the Son of Man ascending to where he was before? It is the spirit that gives life, while the flesh is of no avail. The words I have spoken to you are spirit and life. But there are some of you who do not believe." Jesus knew from the beginning the ones who would not believe and the one who would betray him. And he said, "For this reason I have told you that no one can come to me unless it is granted him by my Father."

As a result of this, many (of) his disciples returned to their former way of life and no longer accompanied him.

Jesus then said to the Twelve, "Do you also want to leave?"

Simon Peter answered him, "Master, to whom shall we go? You have the words of eternal life. We have come to believe and are convinced that you are the Holy One of God.”

I included this much of the chapter because I think it’s that one many people would like to ignore. But to ignore what is said here is to ignore what Jesus taught and what he taught very clearly.

Would a symbolic gesture of eating bread and drinking wine shock anyone? It would be fairly mundane. And yet, Jesus loses many of his disciples because of this teaching.

It is a straightforward statement. Yet just as it was two millennium ago, it is still a difficult for many to accept. So the question becomes: Are you going to walk away from the Body and Blood of Christ and tell yourself that it’s just symbolic, and completely unnecessary? Or are you going to be united with Him in the Eucharist?

It is a truly amazing reality, an experience that should be lived (regularly) by every single person, and it’s something I need to remember to cherish and thank God for more frequently.

Next up (when I get a chance to think of something other than day-to-day life for more than five minutes) Apostolic Succession (sometimes known as the shocking moment when we realize that our pride might be a source of trouble and that we might not always be the greatest authority on every issue under the sun…).
Posted by Cammie Diane at 12:48 PM