Dress Shopping: A Story and My Seasonal Rant 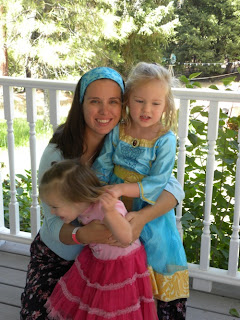 Yesterday, after going up stairs to get ready, I returned to the living room to the sound of hysterical crying.  What could be so awful?

Mae Bae was standing in the center of the room twirling.  Occasionally she would pause, look down, but her hands on her puffy hot pink skirt, and swish gently from side to side.

Sadie was curled up on Nani's lap, crying hysterically and pointing at her sister.

You see, Nani had put Mae in a new dress, because Mae was going to get three shots yesterday, and the dress was a special treat.  Nani had bought Sadie a pretty white skirt, when she found Mae's pink fluffy Dora dress, but Sadie was pretty sure a pretty white skirt was in no way comparable to a Dora dress and the water works started.

And try finding a Dora dress in 6X... it seems to me to be nearly impossible.

Lately they've both had a serious case of wanting to be the same and if you offer them a treat in the store the other will instantly pick the same thing, regardless of what their decision was five seconds earlier (and they both do it!  And they switch back and forth depending on who picks first....).

For a while it was easy to buy them the same outfits and then if they wanted to wear them at the same time, they could.  It's not tough to find a 2T and a 5 in the same size.  But since Sadie has moved on up into a 6X, shopping is suddenly becoming a little more difficult. 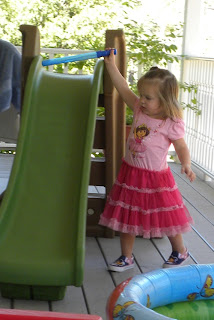 I knew that this day was coming.  I'd glanced over at the "girls" sections when we were clothes shopping at the stores we usually go to (read: affordable stores) and would wince.  Mini shorts with fishnet tights?  That was Target a few seasons ago.

Nani took the girls shopping for a birthday dress earlier this week (and of course I tagged along to do crowd control, which mainly involves keeping Mae from launching herself from the cart).  It's easy to find cute dresses for Mae in the 3T/4T range.  But when we walked into a popular, mainstream children's store, I found myself shaking my head.  The clothes for Sadie were mini versions of what I could have found in the junior section at Macy's, which is to say, not something I'd put my not-quite-three year old, in.

No... I don't think Sadie needs a sequined mini skirt that looks like it would be perfect if she felt like spending a night out clubbing.

Then there were the long, skinny maxi dresses, which personally I love wearing... but that aren't ideal for a running, climbing, playing 3 year old with their narrow, step restricting skirts.

A few years ago I bought a vintage children's dress pattern and I loved the common sense picture on the back.  It showed skirt lengths with corresponding appropriate ages.  Apparently when this particular pattern was made, there was an understanding that the amount of leg shown by the 0-18 month crowd was actually different than the amount that should be shown by a 6 year old or a 10 year old or a 16 year old.

I think we've lost that common sense and it's not all that unusual for designers to think that what would look cute on the new baby would also look cute on her much older sister.  The worst offenders (in my mind at least) are the cutesy skirts I see that are super fluffy, ruffly or pouffy that barely cover ones bum.  The skirts are cute...  if only they had enough fabric to actually cover everything that should certainly at least be covered when one's standing perfectly still (and would hopefully be covered all the time too!).  They seem to make these skirts for every age these days, and I'm just waiting for the "bum ruffles" that our on so many of our 0-3 month onsies to make it into mainstream fashion for the 2-40 crowd. 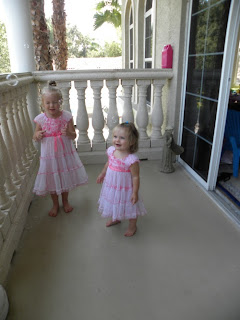 Lately I save the more expensive catalogs and use them as sewing inspiration.

Sadie's rapidly growing legs are the greatest sewing inspiration of all, however.  She's going to need new dresses before too long (if you haven't been around here long, the child refused to wear shorts or pants... we have serious waterworks when I try to sneak them into the clothing rotation, so I've stopped buying them altogether).  And it looks more and more like those new dresses are going to depend on my sewing machine if I want to keep her from looking like she's headed out for a wild night with her friends each time we leave the house.

I should have known we were headed in to another fun season of fashion when I started seeing pictures of stars with bare midriffs...  Oh how I wish fashion trends had a little less trend and a little more class... It would make shopping much, much easier!

Maybe they're trying to save money on fabric?
Posted by Cammie Diane at 12:51 PM